* A series lead is up for grabs on Long Island when Kyle Palmieri and the Islanders host Brayden Point and the Lightning for Game 3. 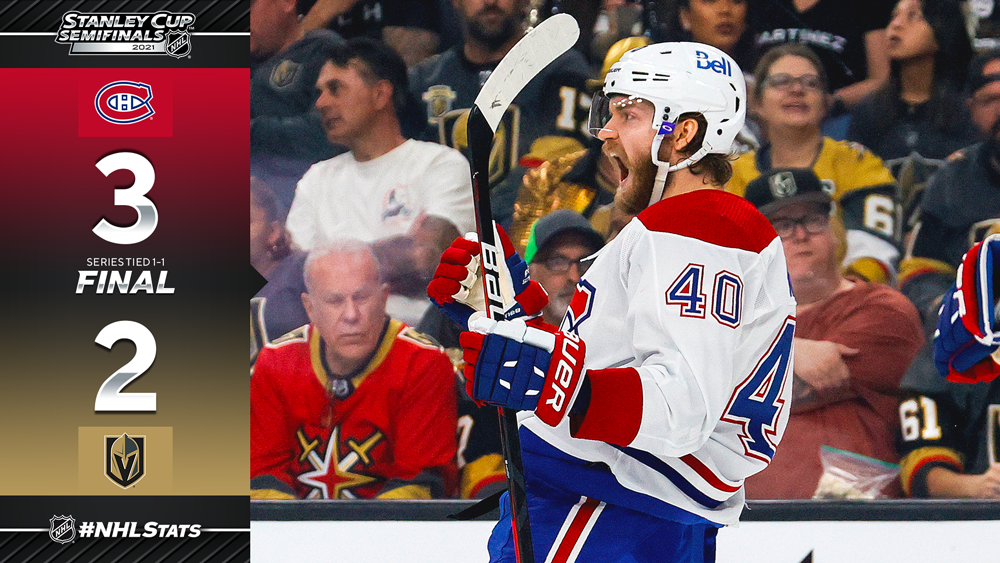 CANADIENS HOLD OFF GOLDEN KNIGHTS RALLY AND BREAK EVEN IN VEGAS
Joel Armia, Tyler Toffoli and Paul Byron each scored to propel Montreal to a 3-0 lead and Carey Price (29 saves) withstood a multi-goal game by Alex Pietrangelo to help the Canadiens head home to Bell Centre with their Stanley Cup Semifinal series tied at one game apiece.

* Toffoli and Cole Caufield (0-1—1) have combined on the same goal in each of Montreal’s last four contests, including Caufield’s first career playoff tally in Game 1 of this Stanley Cup Semifinal series. Wednesday’s performance extended Toffoli’s point streak to eight games, the longest by any player in the 2021 Stanley Cup Playoffs and lengthiest by any Canadiens skater since Vincent Damphousse in 1993 (8 GP). 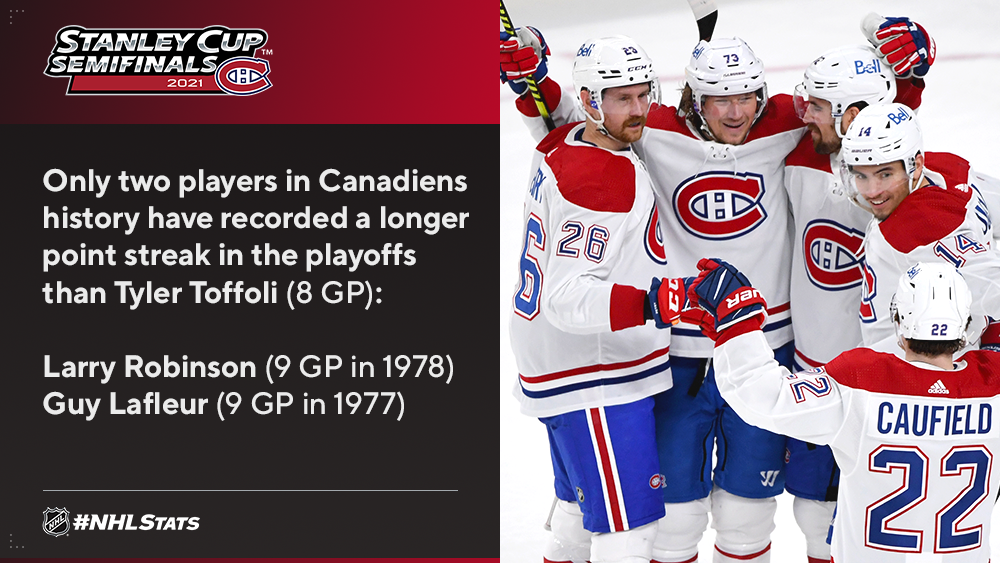 * Caufield became just the second player in Canadiens history to post a playoff point streak of at least four games before his 21st birthday, joining Shayne Corson (6 GP in 1987). In fact, Caufield is the NHL’s second player in as many postseasons to achieve the feat (also 20-year-old Quinn Hughes in 2020: 6 GP w/ VAN).
DID YOU KNOW?

Montreal’s victory guaranteed that each 2021 Stanley Cup Semifinals series will require at least five games. In 10 postseasons since 2012, only two of 20 series in the Conference Finals/Semifinals have been sweeps – with 12 of those 18 completed series requiring at least six games (67%). 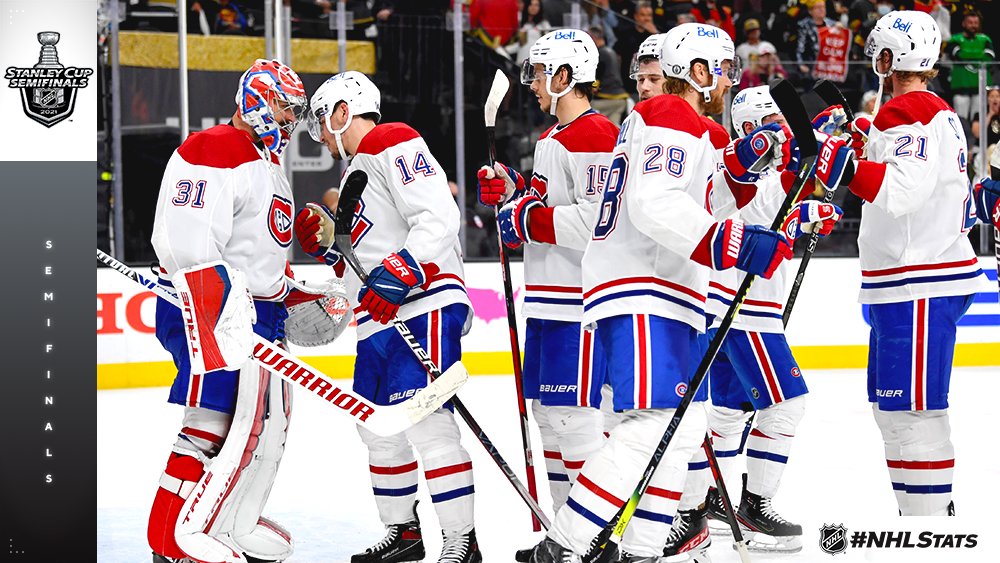 Kevin Hodgson (HEROS) is the recipient of the 2020-21 Willie O’Ree Community Hero Award presented by MassMutual, given “to an individual who – through the sport of hockey – has positively impacted his or her community, culture or society.” Hodgson is the executive director of HEROS (Hockey Education Reaching Out Society) which empowers at-risk youth, and SuperHEROS, which provides boys and girls living with physical and cognitive challenges with a safe and inclusive environment as well as an adapted on-ice curriculum. Click here to read more.

* The 2020-21 recipient of the Jack Adams Award will be revealed tonight. 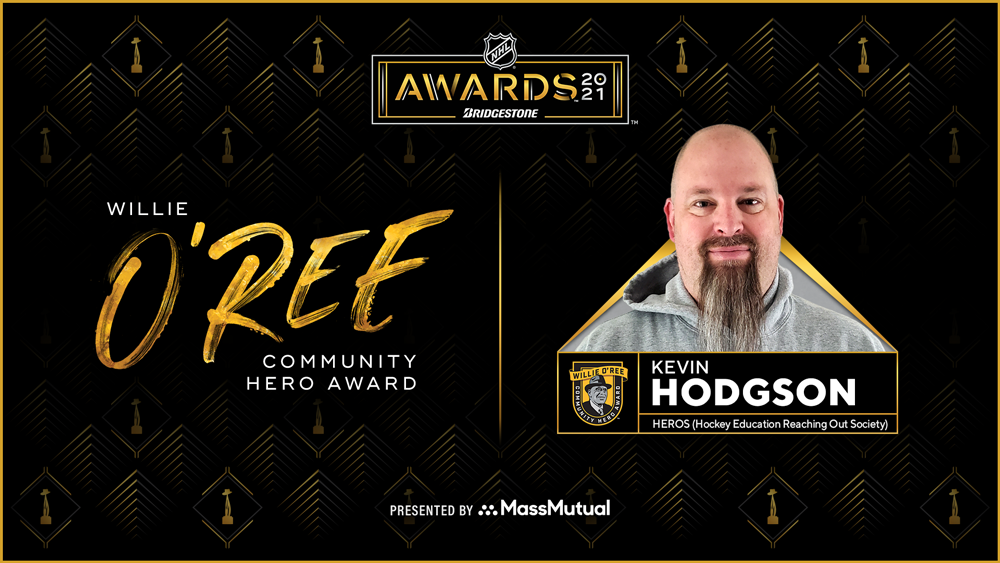 SERIES LEAD UP FOR GRABS ON LONG ISLAND
The Stanley Cup Semifinals shift to Nassau Veterans Memorial Coliseum where the Islanders and Lightning will battle for a series lead. New York is 84-43 (.661) in all-time playoff games at the Coliseum, including a 4-2 mark this postseason. 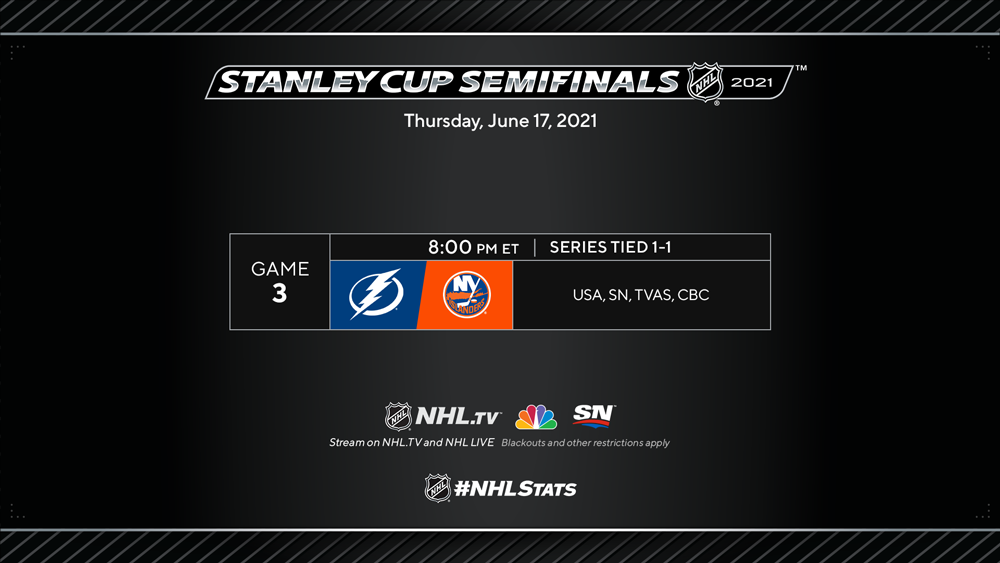 * Point has scored in seven of his last eight games and enters Game 3 with an active five-game goal streak. Should he score again tonight, Point would join elite company by netting a goal in six straight playoff games – a feat achieved by only 14 different players in NHL history and most recently by Martin Havlat (6 GP in 2006 w/ OTT) 15 years ago. 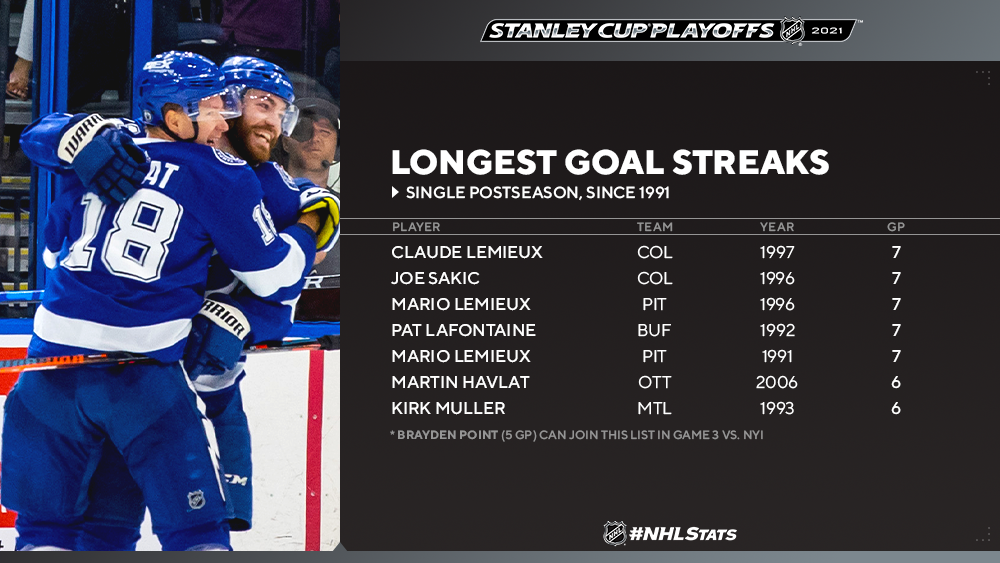