* We are one day away from the start of the 2021 Stanley Cup Semifinals, with the Islanders set to visit the Lightning in Game 1 on Sunday at AMALIE Arena. Game 1 of the series between the Canadiens and Golden Knights will take place on Monday at T-Mobile Arena in Las Vegas.
* The Lightning, Islanders, Golden Knights and Canadiens all defeated higher seeds in the Second Round, marking the first time since 1992 that the round before the Stanley Cup Final has featured four teams that defeated a higher-seeded opponent in the prior series.

* Carolina’s Rod Brind’Amour, Minnesota’s Dean Evason and Florida’s Joel Quenneville were announced as the three finalists for the 2020‑21 Jack Adams Award. The NHL will begin revealing winners of the 2021 NHL Awards presented by Bridgestone on Monday, June 14. 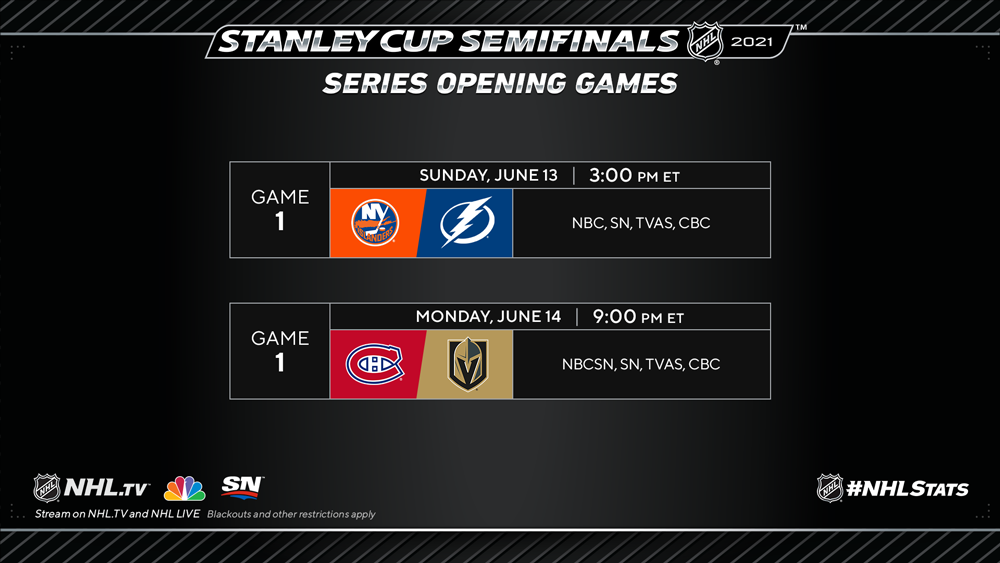 For the second consecutive season it will be the higher-seeded Lightning facing the Islanders with a berth in the Stanley Cup Final on the line – Tampa Bay won in six games in the 2020 Eastern Conference Final on their path to the franchise’s second Stanley Cup.

* Tampa Bay has reached the Stanley Cup Final three times (2004, 2015 & 2020), defeating Calgary in 2004 to claim their first championship and defeating Dallas to win their second in 2020. New York has not reached the Stanley Cup Final since it made five consecutive trips to the championship series from 1980-84, winning the Cup in each of the first four. 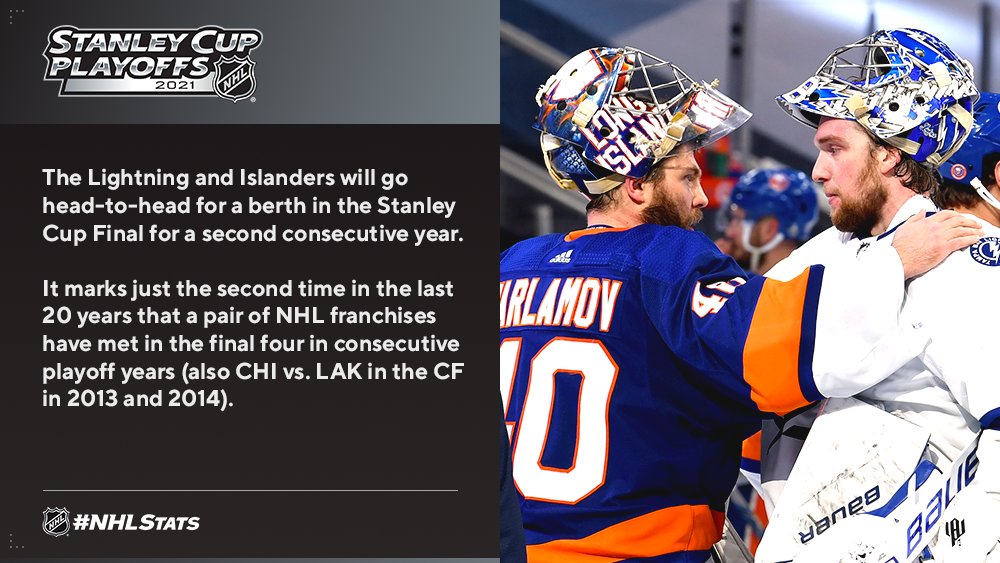 CANADIENS, GOLDEN KNIGHTS START IN LAS VEGAS ON MONDAY
The Canadiens, who held the lowest rank in the regular-season standings of any of the 16 playoff teams (18th), will travel to Las Vegas to face the Golden Knights, who are the top-seeded team among the four remaining clubs. It will pit two streaking teams head-to-head as Montreal enters on a seven-game win streak, the longest of any team in the 2021 Stanley Cup Playoffs, while Vegas reeled off four consecutive victories to eliminate the Presidents’ Trophy-winning Avalanche.

* Vegas is among the final four teams for the third time in the franchise’s four-season existence (also 2018 and 2020) – one of three teams in NHL history who can make that claim along with the Rangers and Blues. Montreal, meanwhile, has advanced to the final four for the first time since 2014. 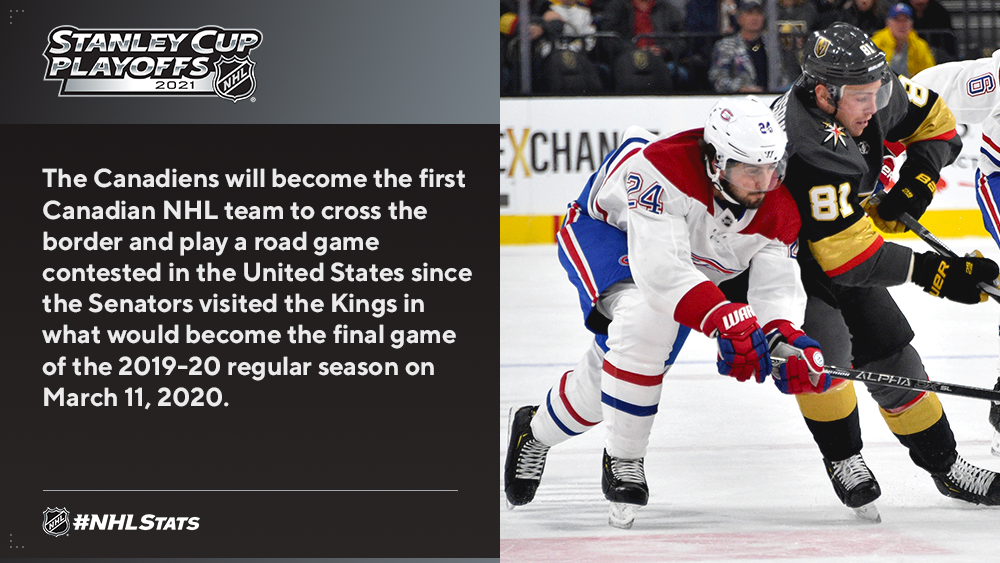 Rod Brind’Amour of the Hurricanes, Dean Evason of the Wild and Joel Quenneville of the Panthers were announced as the three finalists for the 2020-21 Jack Adams Award. 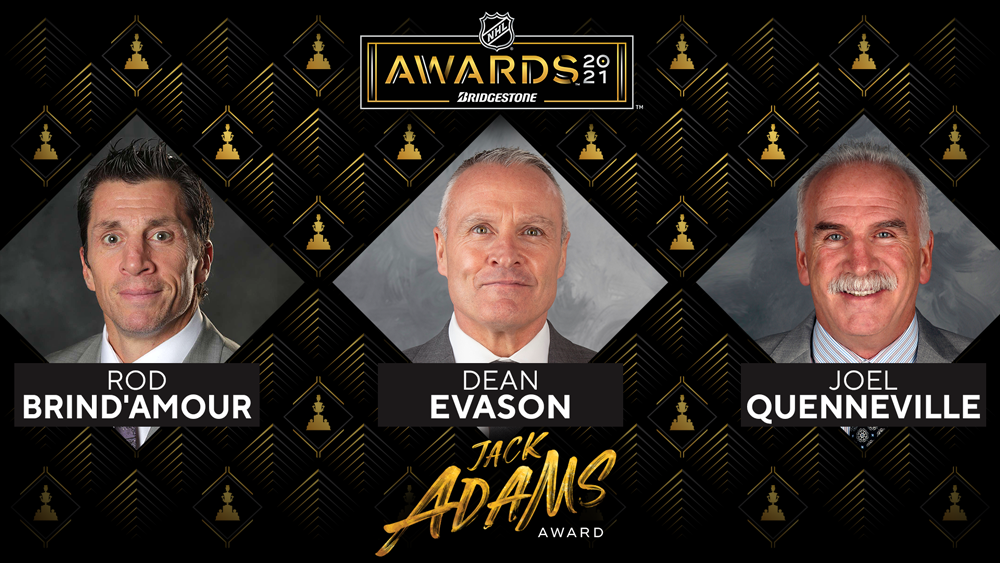 * Evason guided the Wild to their best regular-season points percentage in franchise history (.670, 35-16-5) in his first full season as an NHL head coach, ranking third in the Honda NHL West Division behind Colorado and Vegas, the teams ranked 1-2 in the League’s overall standings.

* Quenneville directed a club that set franchise records for both highest points percentage (.705, 37-14-5) and most goals-per-game (3.36). In fact, the Panthers‘ two highest-scoring teams in franchise history (on a GF/GP basis) are the two teams in Quenneville’s reign to date.