* Red Wings rookie Lucas Raymond showed up to his team’s Original Six showdown Sunday and left with three goals, four points and joined some elite company in the process.

* Undefeated no more. The Bruins and Predators played the role of spoiler and handed the Sharks and Wild their first loss of the 2021-22 season, respectively.

* The Hurricanes and Blues look to become the third and fourth teams to start 5-0-0 in 2021-22. No season in NHL history has featured four teams accomplish the feat.

Skating opposite of Blackhawks veterans Jonathan Toews and Marc-Andre Fleury, Lucas Raymond (3-1—4) factored on four of the Red Wings’ six goals to help them earn a win at United Center and become the first rookie to score a hat trick this season. 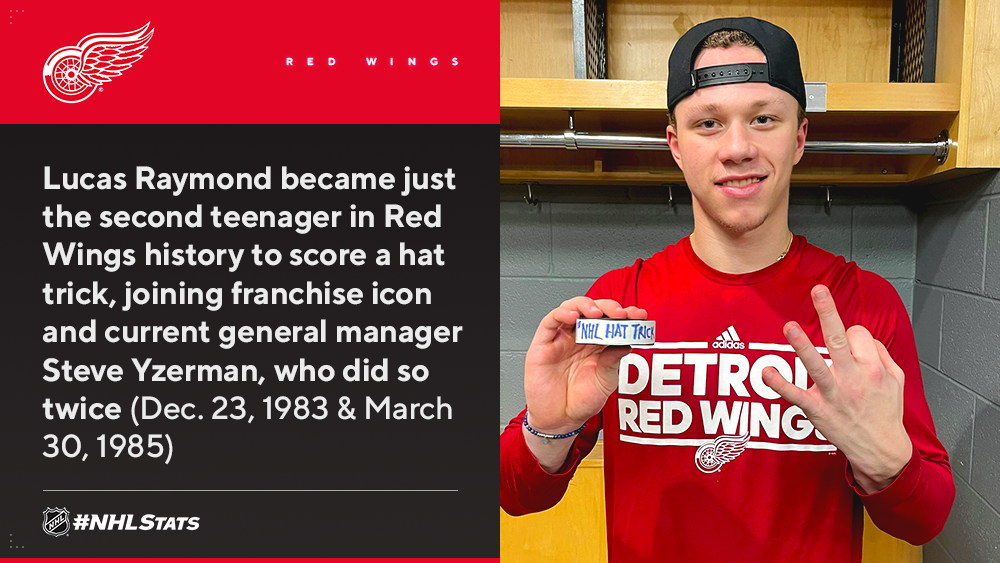 * Raymond joined teammate Tyler Bertuzzi (Oct. 14) as the second Red Wings player to record a hat trick this season and became the franchise’s first rookie to notch three or more goals in a game since Johan Garpenlov (4-0—4) accomplished the feat on Nov. 23, 1990.

The Bruins (3-1-0) and the Predators (2-4-0) had their stars play pivotal roles on Sunday en route to handing their opponents their first loss of the 2021-22 campaign:

* Brad Marchand (1-1—2) scored 28 seconds after the opening face-off, while David Pastrnak (1-1—2) and Patrice Bergeron (0-2—2) also registered multi-point outings. Sunday marked the 30th regular-season game in which all three players had multiple points – tied for the highest such total among any three current teammates. 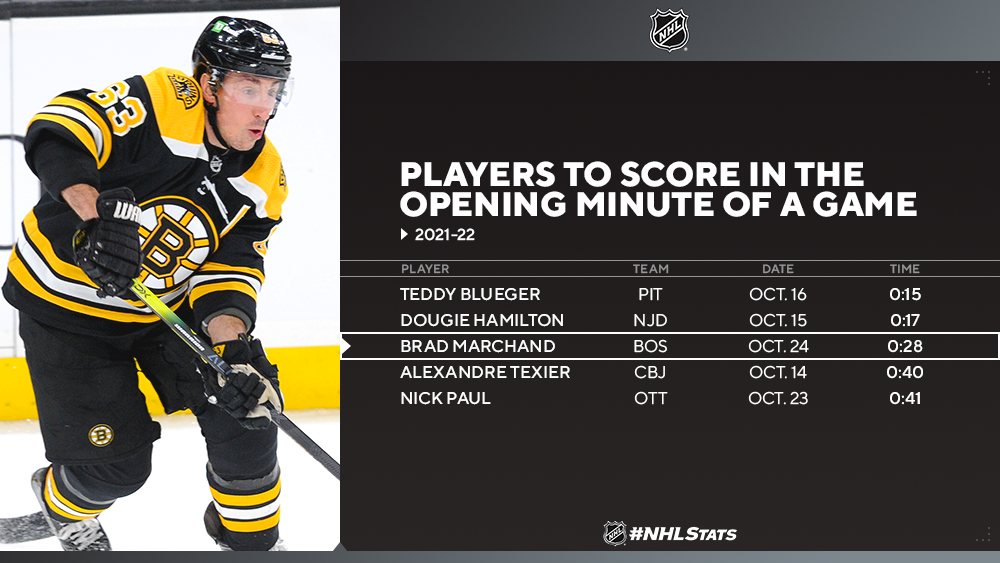 MORE NOTES FEATURED IN ANOTHER EDITION OF #NHLSTATS: LIVE UPDATES
Click here to read the Oct. 24 edition of #NHLStats: Live Updates, which features more notes from Sunday, including Ilya Sorokin (42 saves) recording his second shutout in as many days for the Islanders. 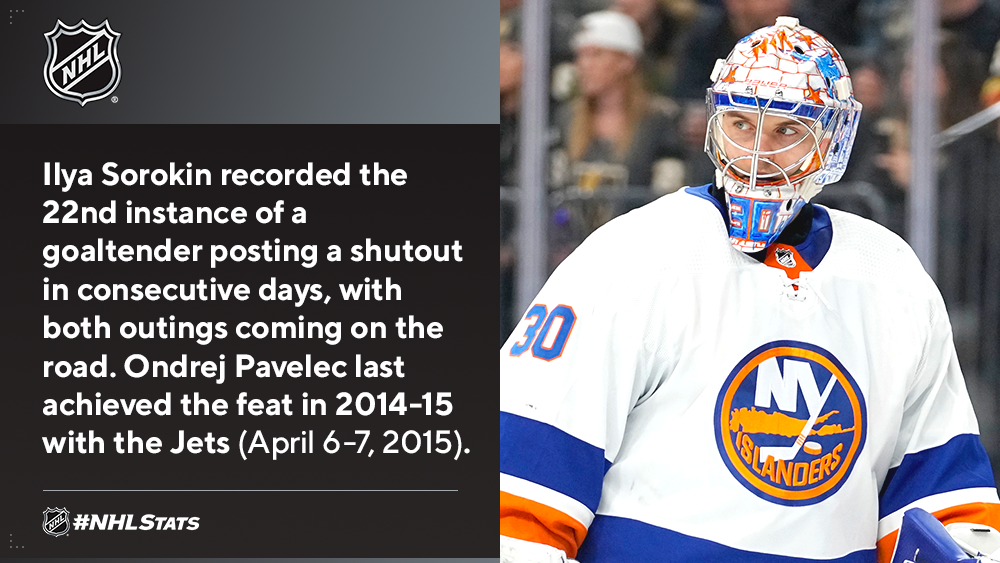 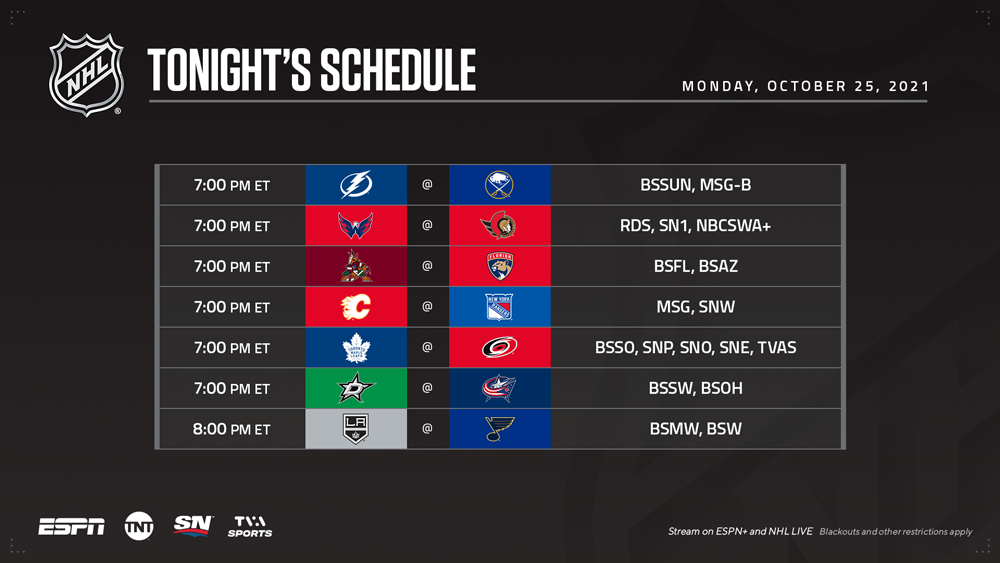 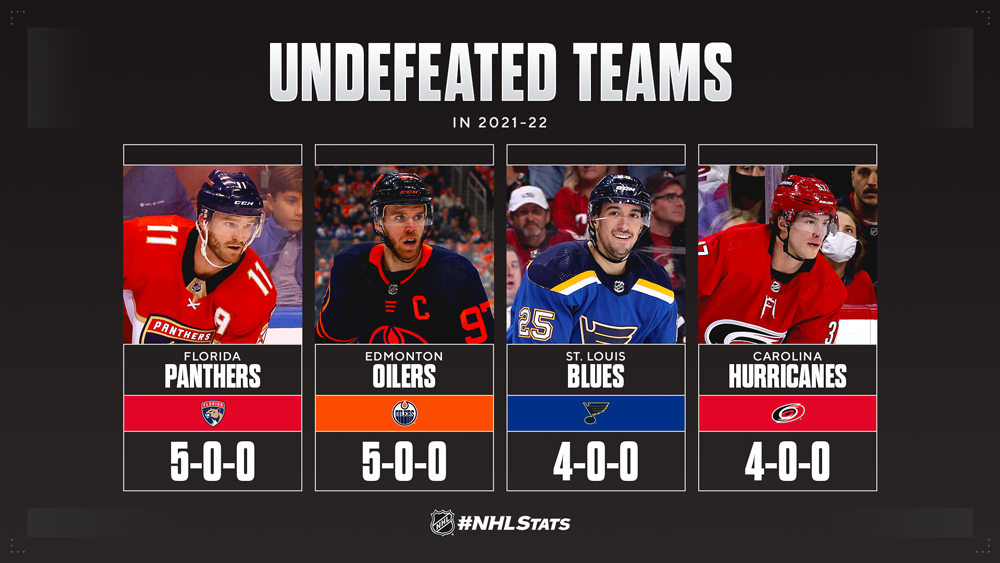 * St. Louis has scored at least three goals in each of its first four games to start the season, including two seven-goal outputs. Should the team tally at least three times Monday, the Blues would become just the third team in 26 years to score 25 or more goals through their first five contests of a season. Toronto (25 in 2018-19 & 26 in 2017-18) and Vancouver (25 in 1995-96) both achieved the feat over that span.