* A total of 18 teams are in action during Thursday’s slate, highlighted by a pair of NHL veterans set to make their debut with new clubs.

GRETZKY, OVECHKIN STAR ON TNT’S DEBUT BROADCAST
On the same night that Wayne Gretzky debuted on the NHL on TNT’s first regular-season broadcast, Alex Ovechkin (2-2—4) continued his pursuit of ‘The Great One’ on the NHL’s all-time goals list with a pair of markers to leapfrog Marcel Dionne (731) for sole possession of fifth place in NHL history. 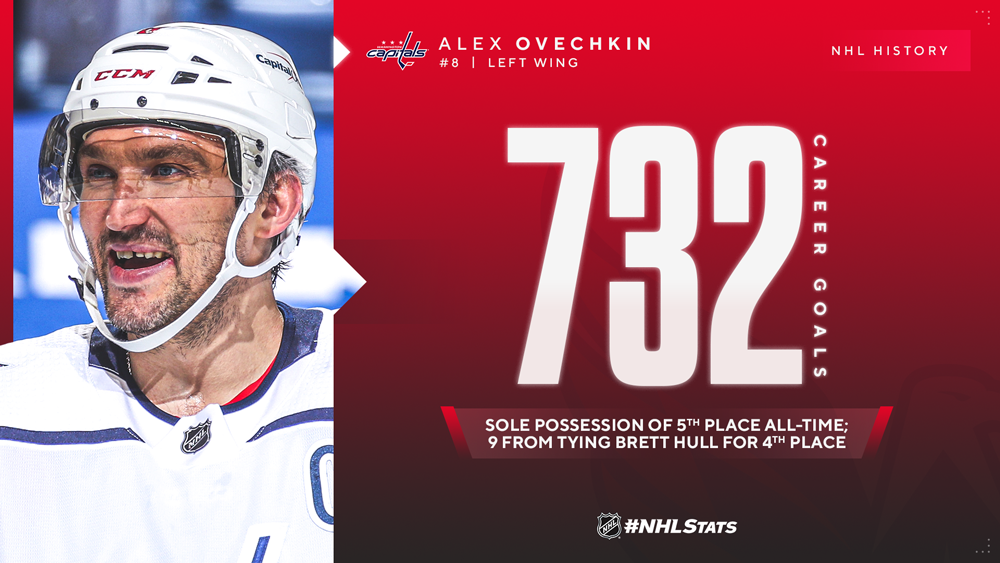 * Ovechkin added to his totals on both special teams. He improved his career power-play totals to 270-232—502 to join Joe Thornton (143-402—545 in 1,680 GP) as the second active player to record 500 points on the power play and moved within four of tying Dave Andreychuk (274) for the most power-play goals in NHL history. He also scored his fifth career shorthanded goal and first since Jan. 3, 2009.

* ICYMI: Ovechkin was mic’d up for the game and did an interview with Gretzky after the contest. 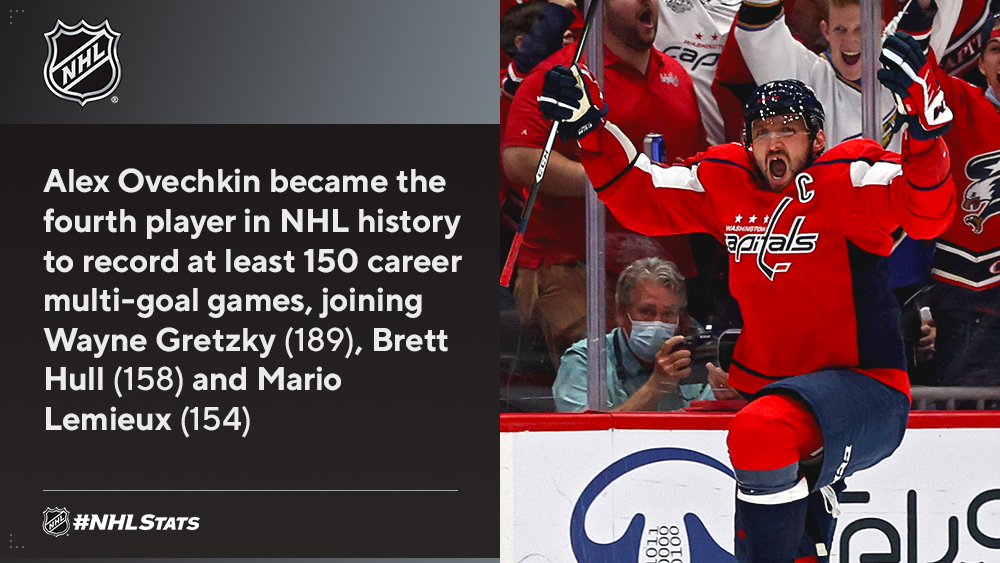 TEENAGERS McTAVISH, LAPIERRE SCORE IN NHL DEBUTS
Teenagers Mason McTavish of the Ducks and Hendrix Lapierre of the Capitals each had memorable NHL debuts, highlighted by exuberant first-goal celebrations:

* Lapierre (19 years, 246 days), who was drafted 22nd overall in the 2020 NHL Draft, scored a highlight-reel goal while falling and became the seventh teenager in Capitals history to score a goal in his NHL debut. In a surreal moment, Lapierre suited up alongside childhood idol Ovechkin. Lapierre, a native of Gatineau, Que., wore an Ovechkin jersey when he attended his first NHL game as a young child to cheer on his favorite player when the Capitals visited the Senators. 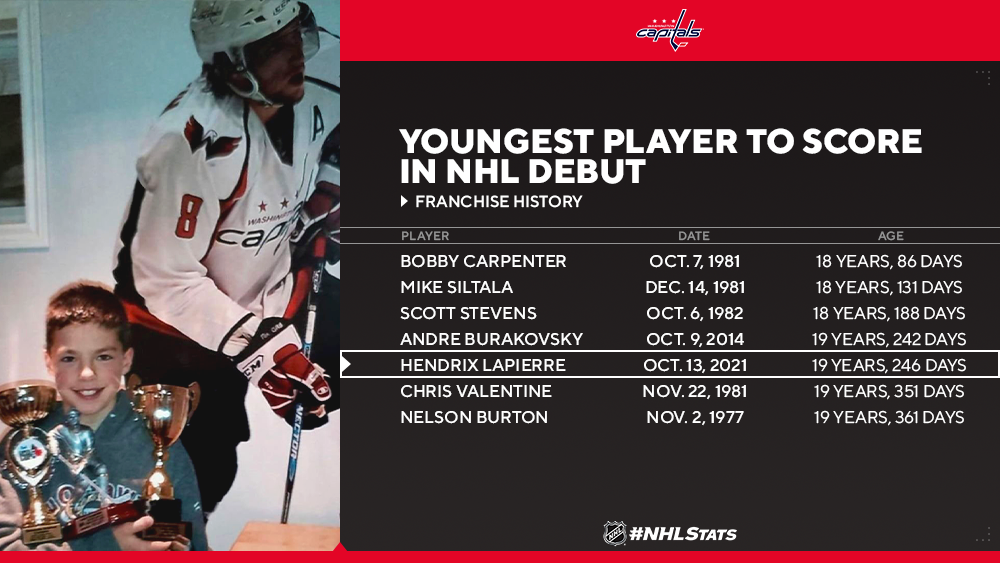 McDAVID, DRAISAITL CONTINUE SUCCESS IN SEASON OPENERS
Connor McDavid (0-2—2) and Leon Draisaitl (0-1—1) continued their history of producing right from the start of an NHL season as they each found the score sheet to help the Oilers withstand a Canucks two-goal, third-period rally to win in the shootout. 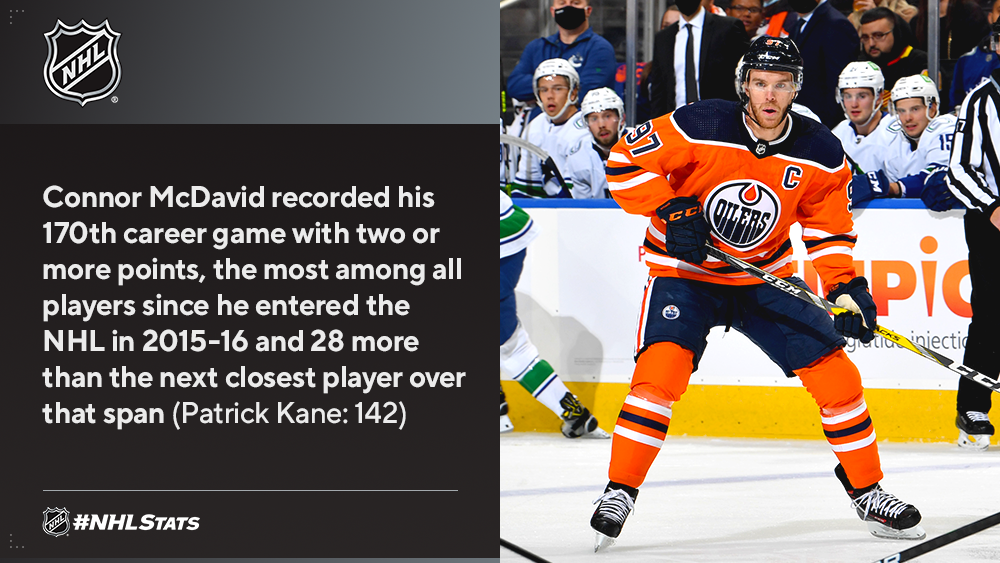 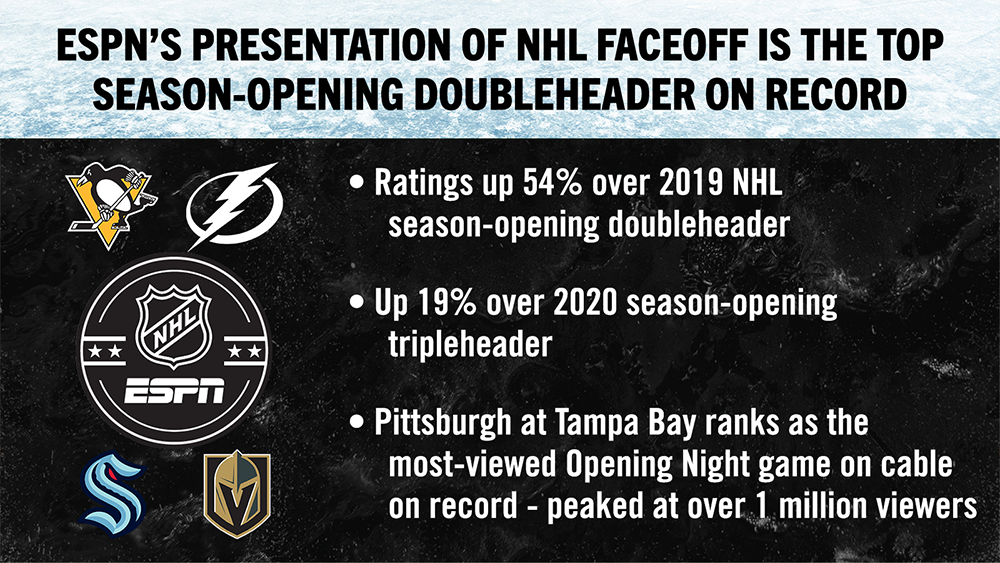 MORE FROM OPENING NIGHT AT #NHLSTATS: LIVE UPDATES
Night two of the 2021-22 season featured some notable performances, including the Maple Leafs and Capitals extending their win streaks in season openers to five games and the Avalanche improving to 21-1-1 at Ball Arena dating back to March 10, 2021 (including regular season and playoffs). Find the link to the blog prior to each day’s games at @PR_NHL (Twitter and Instagram Story). Read more from Wednesday’s live updates here.

CHARA, THORNTON SET TO MAKE DEBUT WITH ISLANDERS, PANTHERS
Veterans Zdeno Chara and Joe Thornton are set to debut with new teams when the Islanders visit the Hurricanes at PNC Arena and the Panthers host the Penguins at FLA Live Arena during a nine-game slate Thursday. 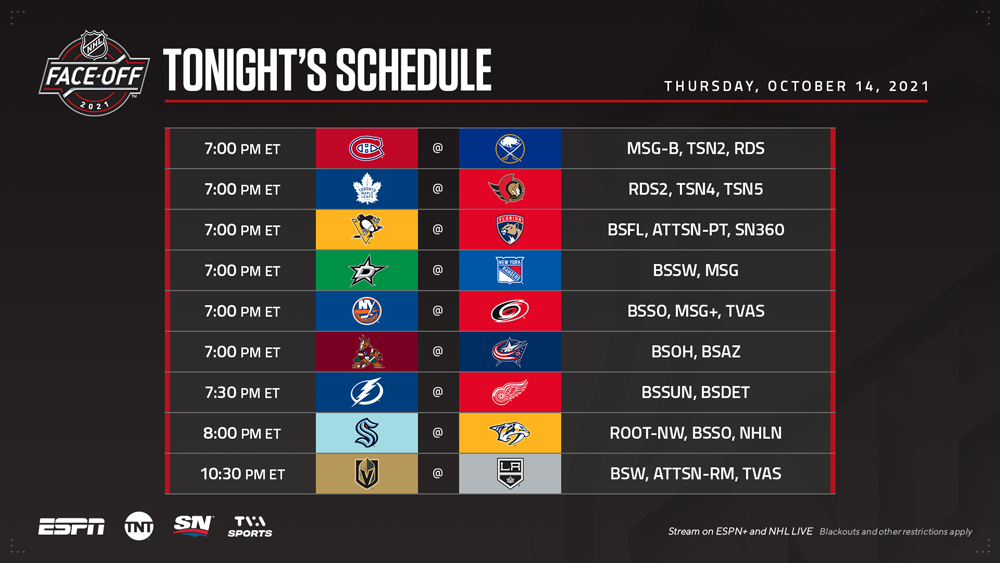 * Chara officially returns for his 24th NHL campaign when New York embarks on its season-opening 13-game road trip as it awaits the opening of UBS Arena, the longest such run in NHL history. Chara (44 years, 210 days) will become the oldest player in franchise history to appear in a game – the current mark is held by Ron Stewart (40 years, 256 days) on March 24, 1973. 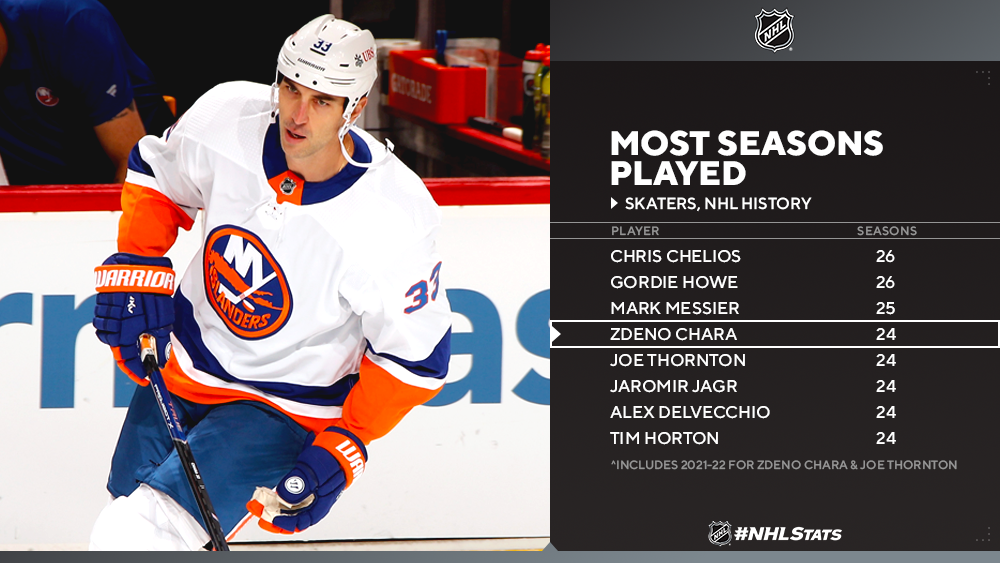