* Debuting their Justin Bieber-inspired jerseys, the Maple Leafs rallied to win their Next Gen Game and move up the Atlantic Division standings.

* J.T. Miller notched two points as the Canucks scored three times in the third period to defeat the League-leading Avalanche in their first of five consecutive games against teams currently in a playoff position.

* Trevor Zegras set a Ducks rookie record for assists, but 15-season NHL veteran Patrick Kane tallied three points and matched a franchise benchmark of his own during the second half of a TNT doubleheader.

* A 10-game Thursday is set to feature Claude Giroux‘s debut with the Panthers, Roman Josi‘s continued pursuit of a 100-point season and a 1,000th game milestone for Peter DeBoer.

Wearing their new Flipside jerseys in collaboration with Justin Bieber – who was in attendance Wednesday – the Maple Leafs flipped the script of the man advantage, scoring two shorthanded goals en route to victory on Next Gen night in Toronto.

* Auston Matthews (0-1—1) and Mitchell Marner (1-0—1) each found the scoresheet Wednesday to match and set single-season career highs in points (80) and goals (27), respectively.

* The Maple Leafs received shorthanded goals from both Ilya Mikheyev and Pierre Engvall, marking the second time this season the club has tallied two in a game. This is the only season in the past 30 years in which Toronto has had multiple games with two or more shorthanded goals.

* Vancouver is among a group of five clubs separated by five points in the Western Conference, with Edmonton (75 points), Dallas (73 points), Vegas (72 points) and Winnipeg (70 points) ahead of them in the standings. The Canucks have six games remaining against those clubs (3 vs. VGK, 2 vs. DAL, 1 vs. EDM) and swept their regular-season series against the Jets (VAN: 3-0-0; WPG: 0-2-1).

KANE NOTCHES THREE POINTS, HITS 20-GOAL MARK ON TNT
Playing in the nightcap of a doubleheader on TNT, Patrick Kane (1-2—3) reached the 20-goal mark for the 14th time in his 15-season career – with the lone exception being the condensed 2020-21 campaign – to help the Blackhawks win their seventh straight meeting with the Ducks dating to Feb. 27, 2019. That is Chicago’s second-longest active winning streak against one opponent (8 GP vs. OTT).

* Kane, who tied Blackhawks legend and Hall of Fame member Stan Mikita for the most 20-goal seasons in franchise history, also recorded his 99th career three-point outing – only Sidney Crosby (130) and Alex Ovechkin (108) have more since his NHL debut in 2007-08. 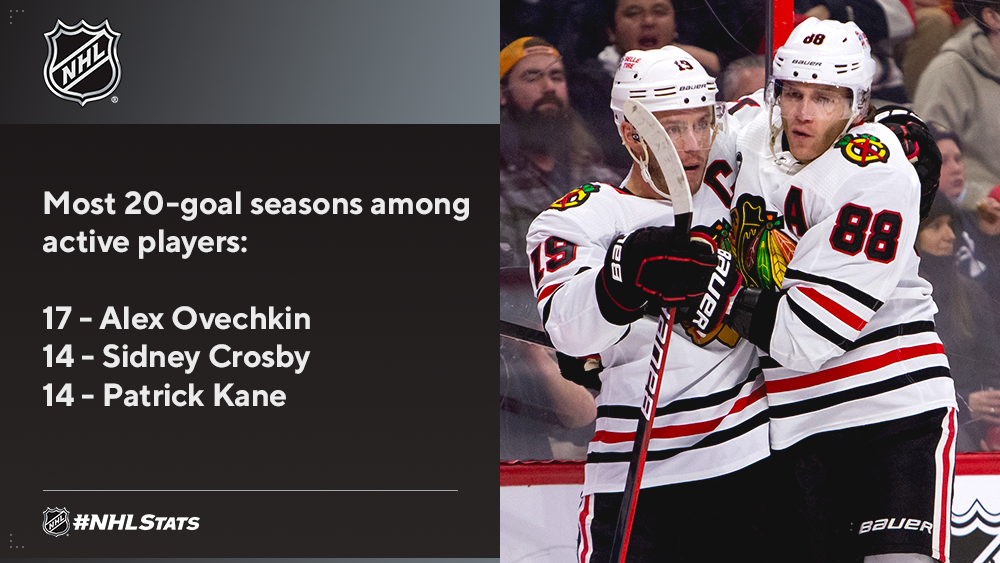 * Find more stats like these in the latest edition of #NHLStats: Live Updates.

STORYLINES TO WATCH THURSDAY: JOSI POINT STREAK, PANTHERS DEBUT FOR GIROUX
A 10-game Thursday will feature Claude Giroux making his debut with the Panthers (42-14-6, 90 points), while Roman Josi (18-60—78 in 62 GP) looks to extend the NHL’s longest active point streak when the Predators (37-23-4, 78 points) conclude their road trip with a matchup against the Golden Knights (34-28-4, 72 points). 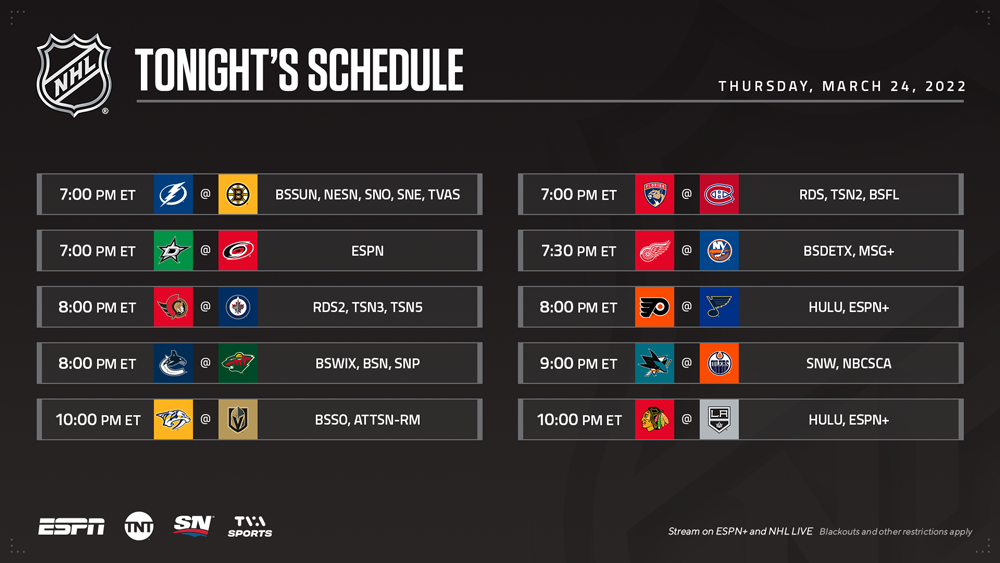 * Josi, who has found the score sheet in every game in March (11 GP), will aim to extend his point streak to 12 contests Thursday which would match his career high (12 GP in 2019-20) and trail only J-P Dumont (16 GP in 2007-08) for the longest in franchise history. The Predators captain leads all players in scoring through March with 4-21—25 (11 GP) and can become just the fourth different defenseman in NHL history to record 26 or more points in a calendar month.

* The Golden Knights will look to regain a playoff position as head coach Peter DeBoer gets set to serve his 1,000th regular-season game as head coach. He can become the 30th head coach in League history to reach the mark and the sixth active, with Todd McLellan (997 GC) of the Kings on track to follow him as the seventh Monday.