* The Islanders and Lightning will play Game 7 on Friday for a spot in the 2021 Stanley Cup Final after New York staged a multi-goal comeback to claim an overtime win in front of yet another boisterous crowd at Nassau Veterans Memorial Coliseum.

* The Canadiens return home to Montreal with a chance to secure a spot in the Stanley Cup Final for the first time in 28 years, while the Golden Knights have plans to shift the series back to Las Vegas for each club’s second Game 7 of 2021. 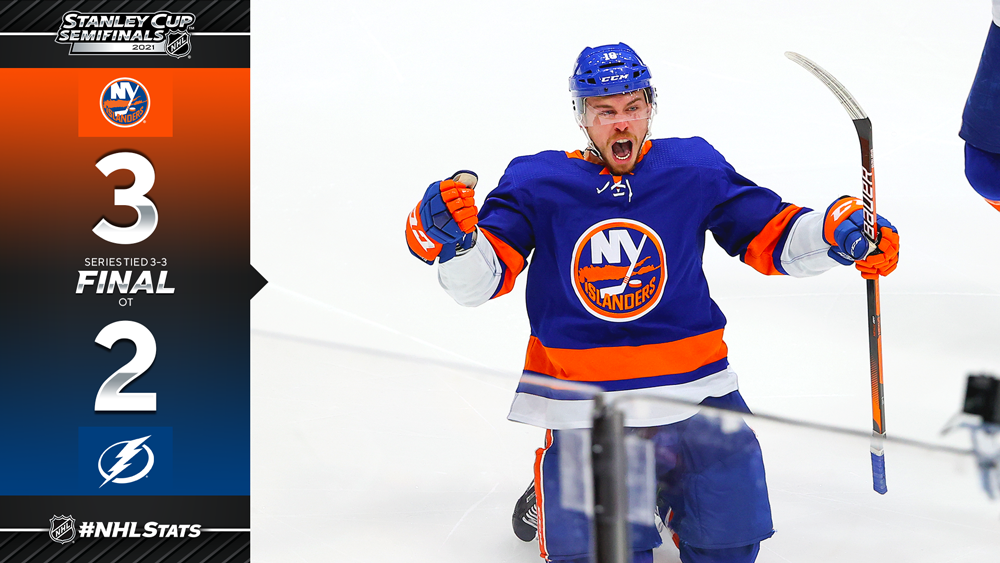 YES, YES, YES! THERE WILL BE A GAME 7 FRIDAY IN TAMPA

Trailing 2-0 in the second period, the Islanders began their comeback with a goal by Jordan Eberle and Scott Mayfield tied the game in the third period, with Mathew Barzal assisting on each tally. It took just 78 seconds of extra time to break the deadlock as Anthony Beauvillier scored his first career overtime goal to force Game 7.
* Beauvillier’s goal marked the second time this postseason that a team scored in the opening 70 seconds of overtime to stave off elimination. It also marks the second straight year that New York has won in overtime to extend a final-four series against Tampa Bay. 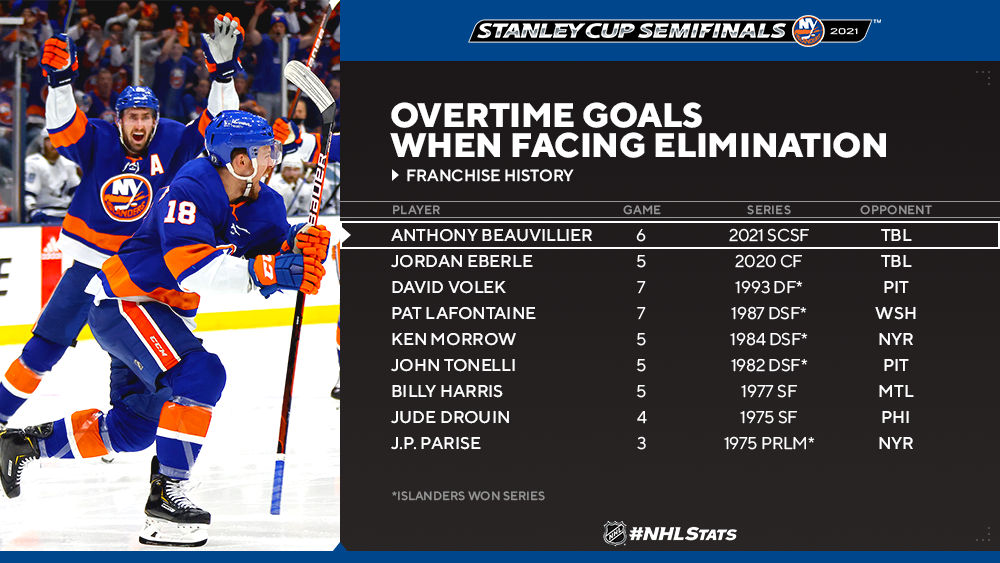 * Wednesday marked the 25th overtime game of the 2021 Stanley Cup Playoffs, the eighth postseason in NHL history to feature as many and three shy of the League record. Thirteen of 14 series so far this year have included at least one overtime game (only COL vs. STL did not).

The Lightning will host the Islanders in Game 7 on Friday, the ninth such contest for Tampa Bay (5-3) and 10th for New York (4-5). 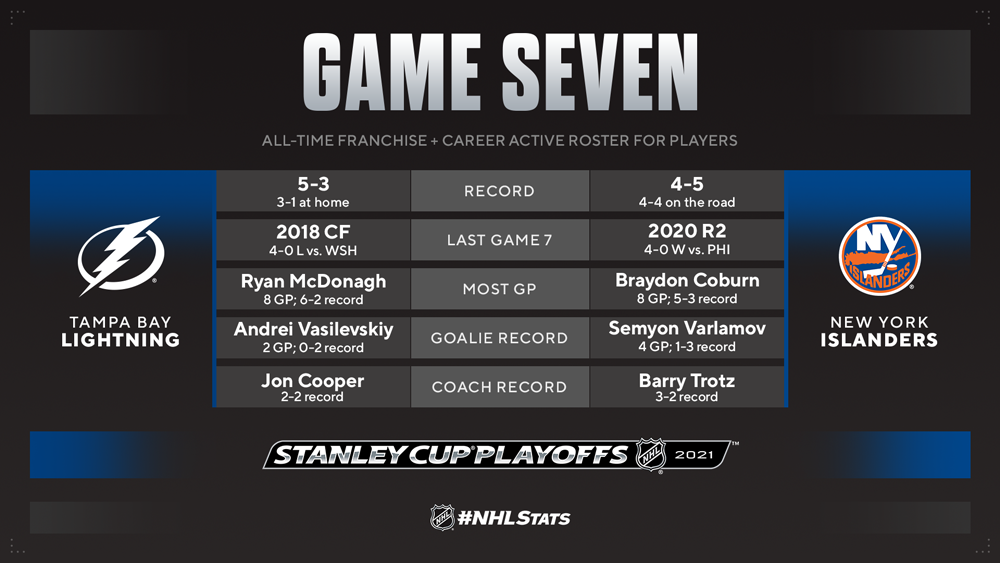 * By the end of this round, the Lightning will have contested more Game 7s in the Conference Finals/Semifinals than seven active franchises have played in their history.

* This is the second time that the Islanders will play a Game 7 with a trip to the Stanley Cup Final on the line. In the 1975 Semifinals against Philadelphia, New York claimed a 2-1 victory at Nassau Coliseum to tie the series at 3-3 before losing 4-1 in the winner-take-all showdown two nights later at the Spectrum.

* Islanders head coach Barry Trotz was also behind the bench for the NHL’s last Game 7 during the final four of the Stanley Cup Playoffs, in 2018 with the Capitals (also vs. TBL). Washington first staved off elimination with a shutout in Game 6 before blanking higher-seeded Tampa Bay again in Game 7 to set up a date with Vegas in the Stanley Cup Final – a potential this year for New York. 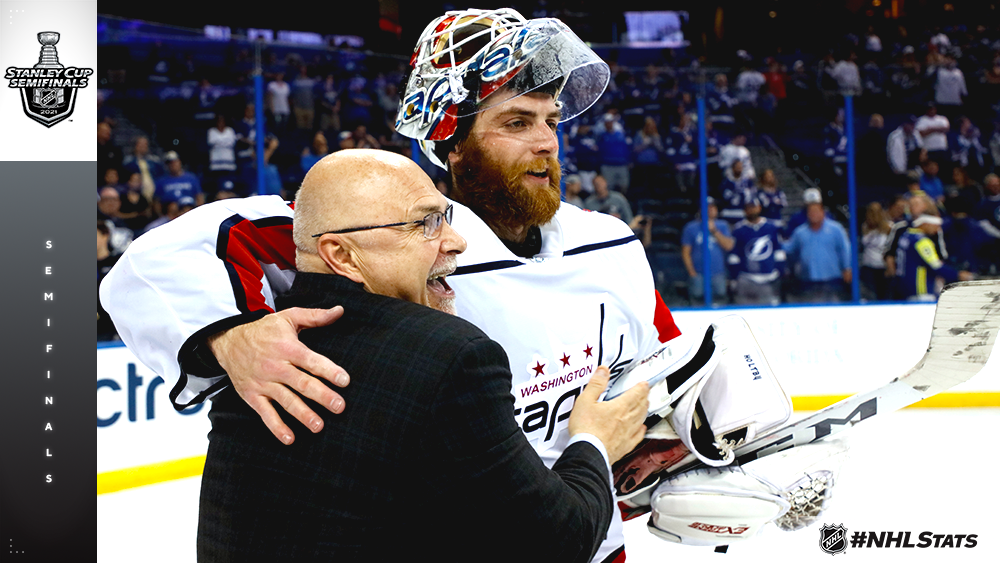 PATRICE BERGERON WINS MARK MESSIER NHL LEADERSHIP AWARD
Bruins captain Patrice Bergeron is the 2020-21 recipient of the Mark Messier NHL Leadership Award, which is presented “to the player who exemplifies great leadership qualities to his team, on and off the ice, during the regular season and who plays a leading role in his community growing the game of hockey.” Messier solicits suggestions from team and League personnel to compile a list of potential candidates for the award. However, the selection of the winner is Messier’s alone. Click here for more information. 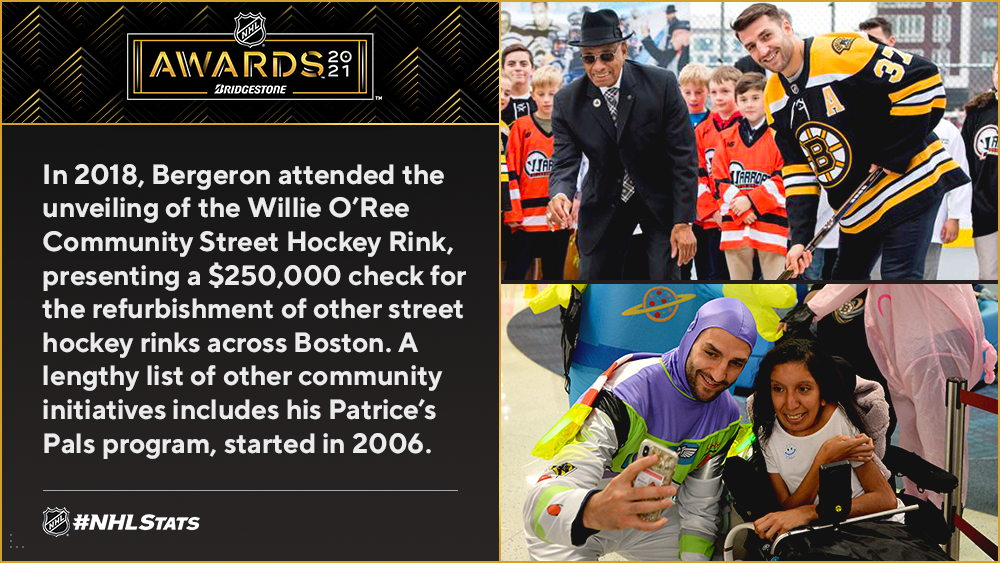 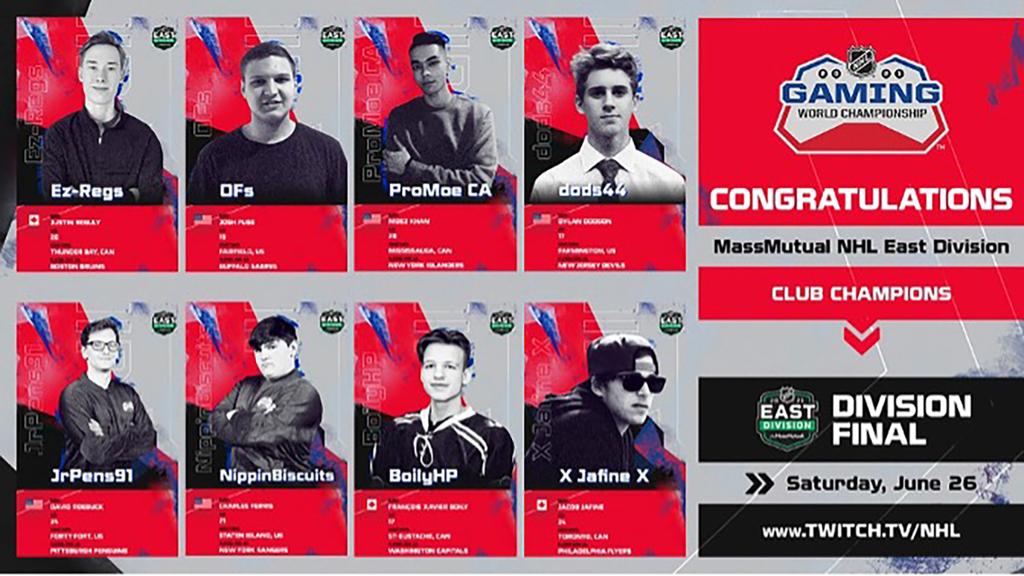 MONTREAL EYES FIRST FINAL BERTH SINCE 1993, VEGAS TRIES FOR GAME 7
Montreal and Vegas are set to face off at Bell Centre tonight, with the Canadiens looking to reach the Stanley Cup Final for the first time in 28 years and for an NHL-record 33rd time since 1917-18. The Golden Knights, meanwhile, face a 3-2 series deficit for the first time in their history and will look to win a non-Game 7 elimination contest for the first time (2-3 when facing elimination; both wins came in Game 7s). 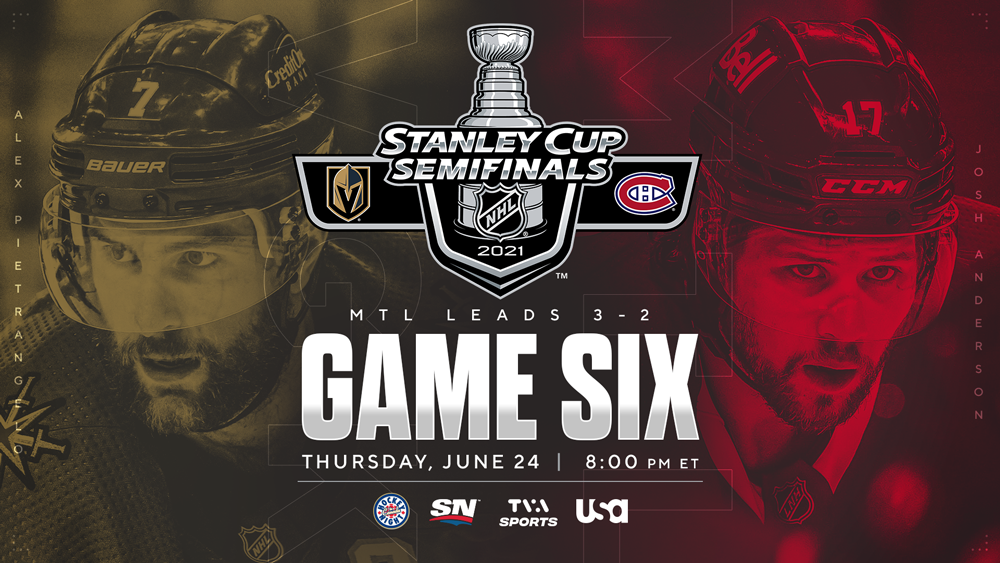 * The Canadiens can clinch a Conference Finals/Semifinals series on home ice for the seventh time in the NHL’s expansion era (since 1967-68) – their last such victory came in 1993 when they defeated the Islanders in Game 5 at the Montreal Forum.

* Cole Caufield (3-5—8 in 14 GP), who has found the score sheet in six of the last seven games dating to the Second Round, is the first Canadiens rookie with at least eight points in one playoff year since P.K. Subban (1-7—8 in 14 GP) in 2010. Caufield, who collected an assist on the series-clinching goal last round, is one of nine different Canadiens rookies to notch a point in a potential clinching game since they last won the Stanley Cup. 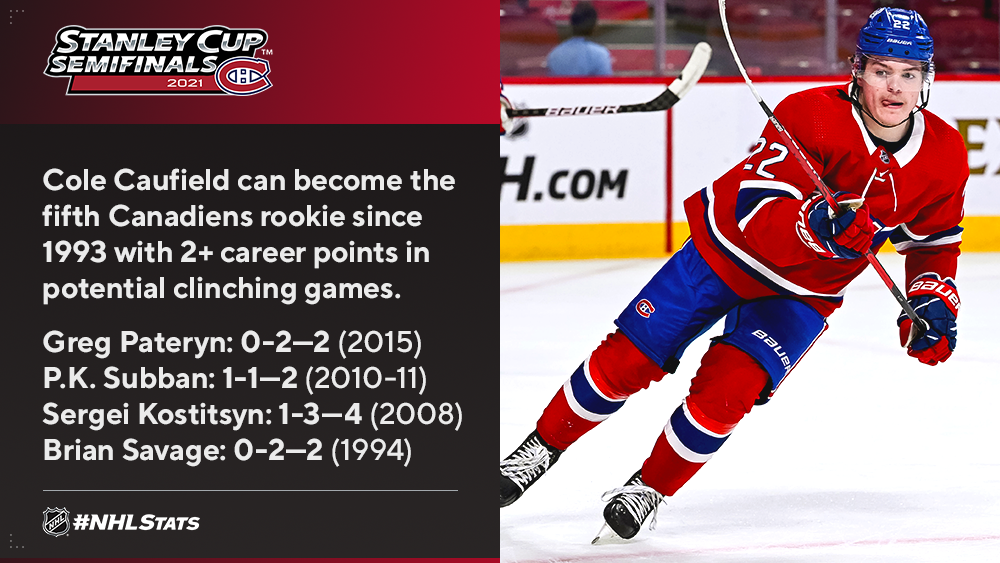 * Alex Pietrangelo (4-7—11 in 18 GP) is tied for the second-most points among all Golden Knights players this postseason, including a share of the team lead with three points this round. Pietrangelo has nine points in 14 career playoff games when facing elimination, finding the score sheet in seven of his last eight such contests including five straight dating to Game 6 of the 2019 Second Round (2-4—6 in 5 GP). 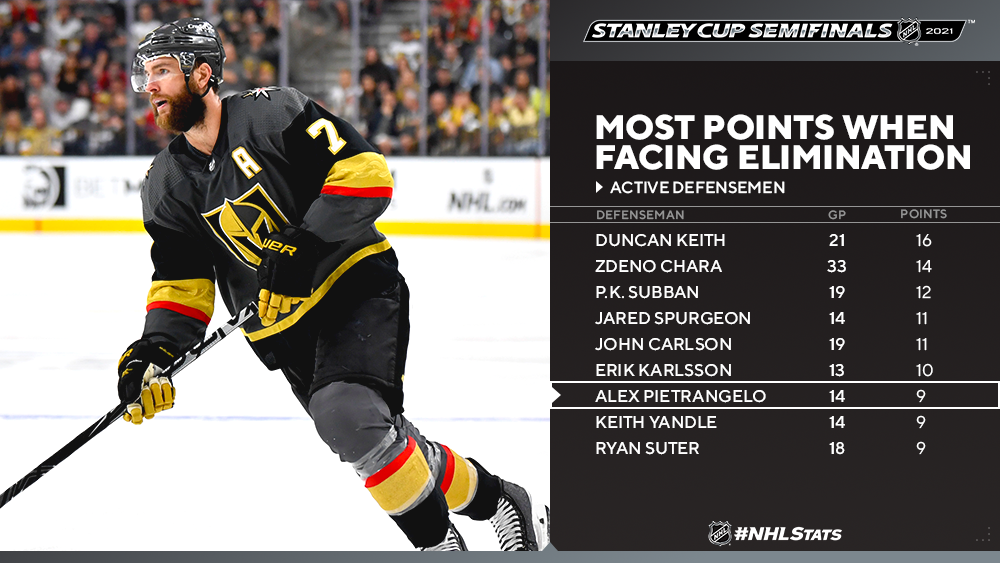