* The Lightning matched a franchise playoff record with eight goals to claim an 8-0 victory on home ice and move within one win of their second straight appearance in the Stanley Cup Final.

* Brayden Point became the second player in NHL history – and first in 45 years – to post an eight-game goal streak in one postseason, following Reggie Leach who had a 10-game run with the Flyers in 1976.

* After three straight one-goal games, including back-to-back overtime contests, the Golden Knights and Canadiens will square off for a 3-2 series lead tonight in Las Vegas. 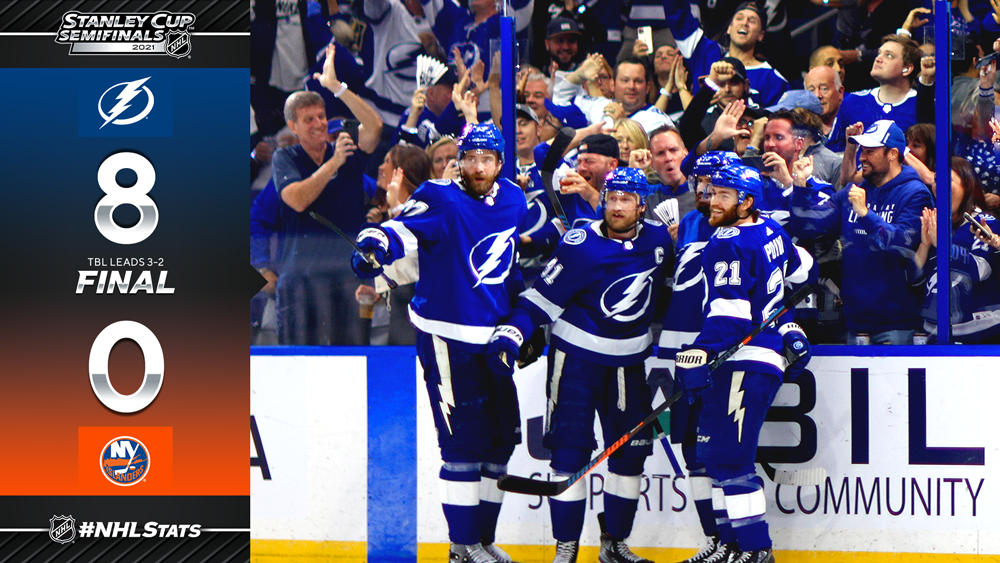 LIGHTNING SCORE EARLY AND OFTEN TO MOVE WITHIN ONE WIN OF FINAL
After missing most of his team’s Stanley Cup run in 2020, captain Steven Stamkos (2-1—3) scored two of Tampa Bay’s eight goals as the Lightning benefited from another high-scoring outing at home to push the Islanders to the brink of elimination and move within one victory of advancing to the Stanley Cup Final. 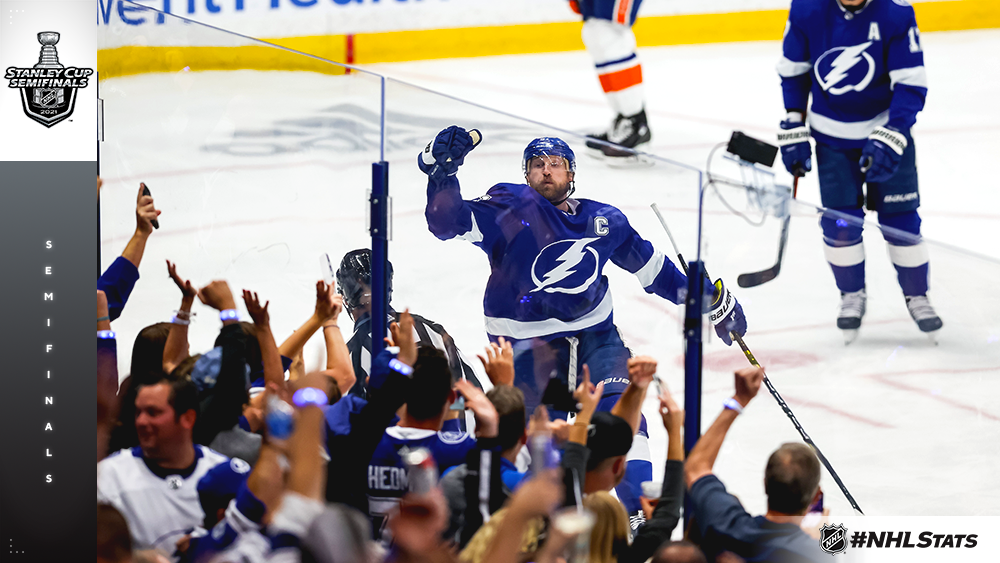 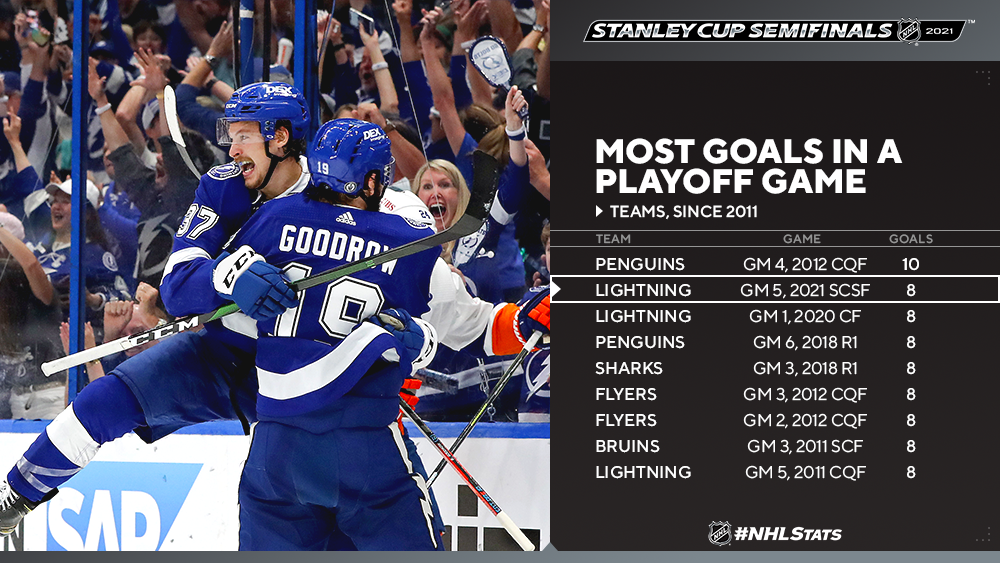 * Tampa Bay is averaging 4.50 goals per game at AMALIE Arena these playoffs, the highest single-postseason total in franchise history and highest by any team at home (min. 5 GP) since the Mario Lemieux-led Penguins in 1993 (4.57 in 7 GP). 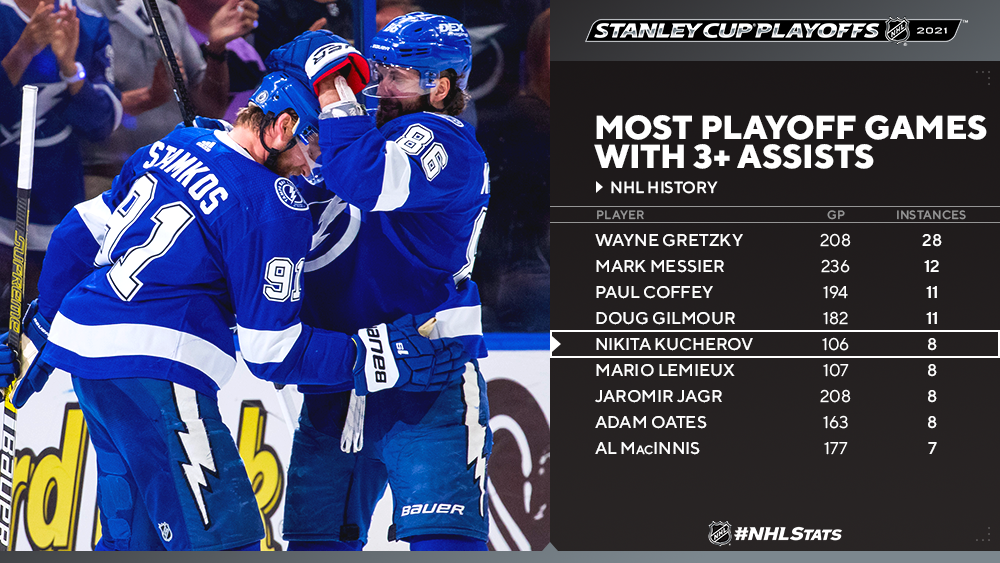 * Point (13-5—18 in 16 GP), who now sits six goals shy of the NHL record for most in a playoff year, became just the second player in League history to register a playoff goal streak of eight or more games, following Reggie Leach who had a 10-game run in 1976 with the Flyers. 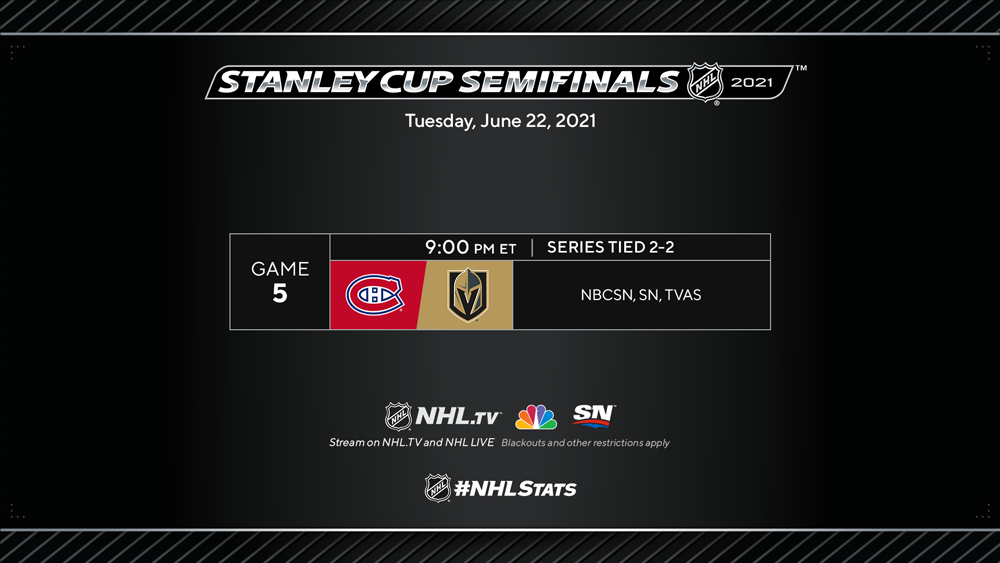 * The Canadiens last won Game 5 after being tied 2-2 in the 2002 Conference Quarterfinals when Jose Theodore backed them to a road victory at FleetCenter in Boston before returning to Bell Centre (then Centre Molson) to eliminate the Bruins, the No. 1-ranked team in the Eastern Conference, in Game 6. Both of those Montreal victories came by a 2-1 margin as Theodore stopped 77 of 79 shots faced over the final two contests.

* The Golden Knights have received a slew of offense from their blueline in the 2021 Stanley Cup Semifinals, with five of their six defensemen notching at least one goal thus far in the series (Alex Pietrangelo: 3, Nick Holden, Alec Martinez, Brayden McNabb & Shea Theodore). Only three teams in NHL history have had more blueliners score in a single playoff series: Boston (6 in 2019 SCF vs. STL), Calgary (6 in 1988 DSF vs. LAK) and Vancouver (6 in 1983 DSF vs. CGY).
* Vegas has had at least one defenseman score in each of its last five games. In the past 25 years, only two teams have had a blueliner score in more consecutive games within a postseason: Tampa Bay (6 GP in 2020) and Boston (6 GP in 2013 and 6 GP in 2014). 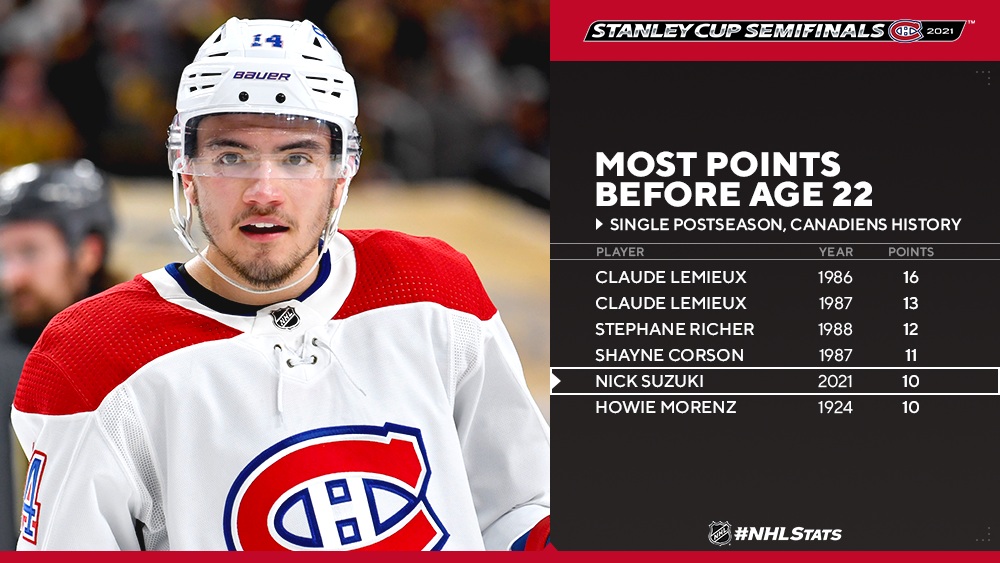