* After the Golden Knights and Avalanche combined for three game-tying tallies, Vegas scored three unanswered goals to advance to the round before the Stanley Cup Final for the third time since joining the NHL in 2017-18.
* The NHL announced the dates, starting times and television information for the 2021 Stanley Cup Semifinals, with puck drop for Game 1 between the Islanders and Lightning series set for Sunday at AMALIE Arena (3 p.m. ET on NBC, SN, TVAS, CBC).

* Nathan MacKinnon, Auston Matthews and Connor McDavid were named the three finalists for the 2020-21 Hart Memorial Trophy, awarded “to the player adjudged to be the most valuable to his team”. 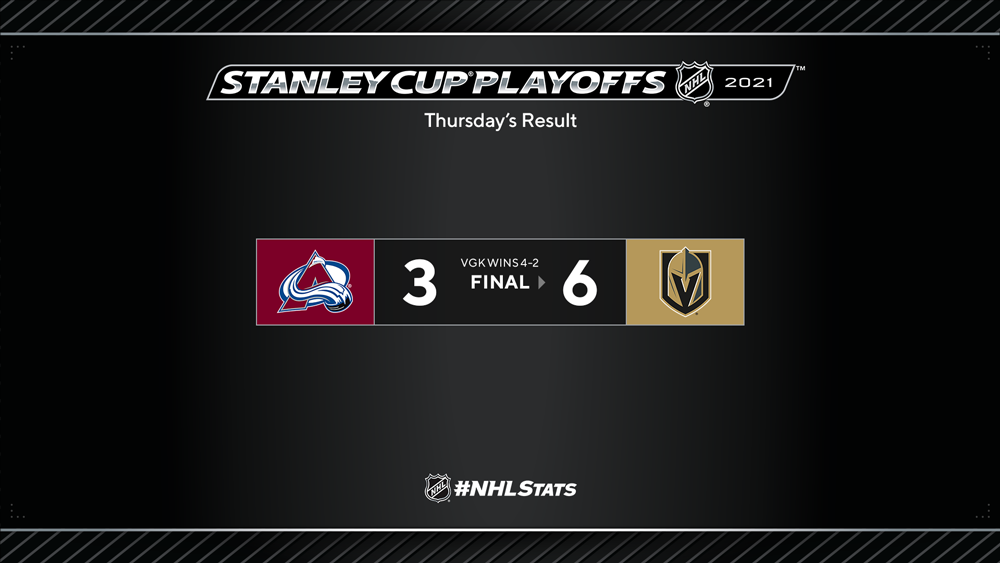 VEGAS REACHES FINAL FOUR FOR THIRD TIME SINCE INAUGURAL SEASON
The Avalanche scored just 23 seconds into the game and pulled even twice in the second period, but the Golden Knights responded with three unanswered goals to eliminate the Presidents’ Trophy winner and advance to the Stanley Cup Semifinals. This is Vegas’ third all-time trip to the final four, making them the third franchise in League history to reach the round before the Stanley Cup Final three times through its first four NHL seasons, following the Rangers and Blues. 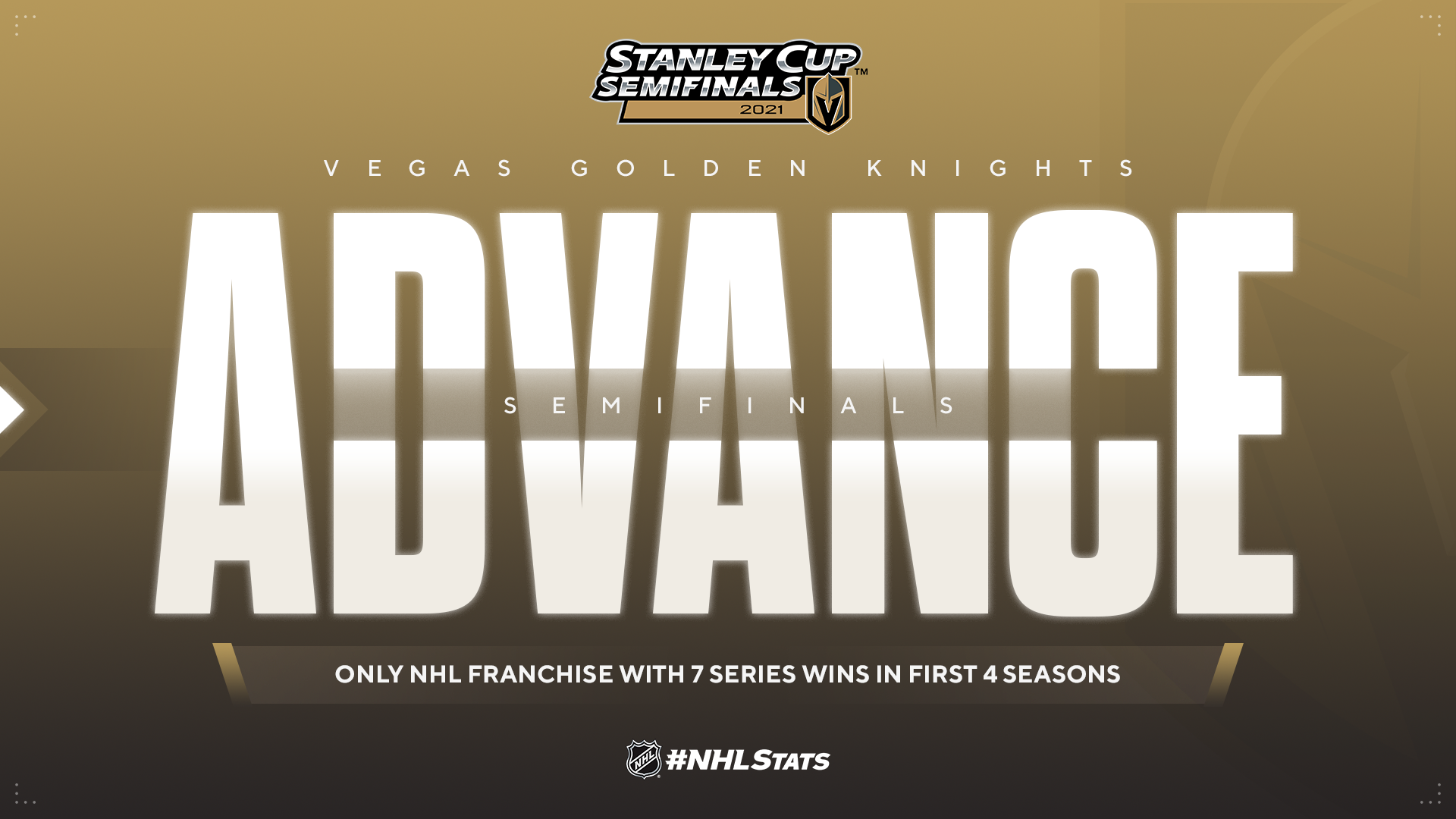 * Vegas’ victory also marked the fourth instance in NHL history in which a team overcame a 2-0 series deficit to win a best-of-seven against the No. 1 seed. Chicago achieved the feat in the 1962 and 1965 Semifinals, while Boston also did so in the 2011 Stanley Cup Final.

VEGAS TO MEET MONTREAL WITH BERTH IN STANLEY CUP FINAL ON THE LINE
The Golden Knights will face the Canadiens in the Stanley Cup Semifinals, marking the first-ever playoff meeting between the clubs. Montreal owns a 5-1-0 (10 points) edge in six all-time regular-season games versus Vegas (1-2-3, 5 points). 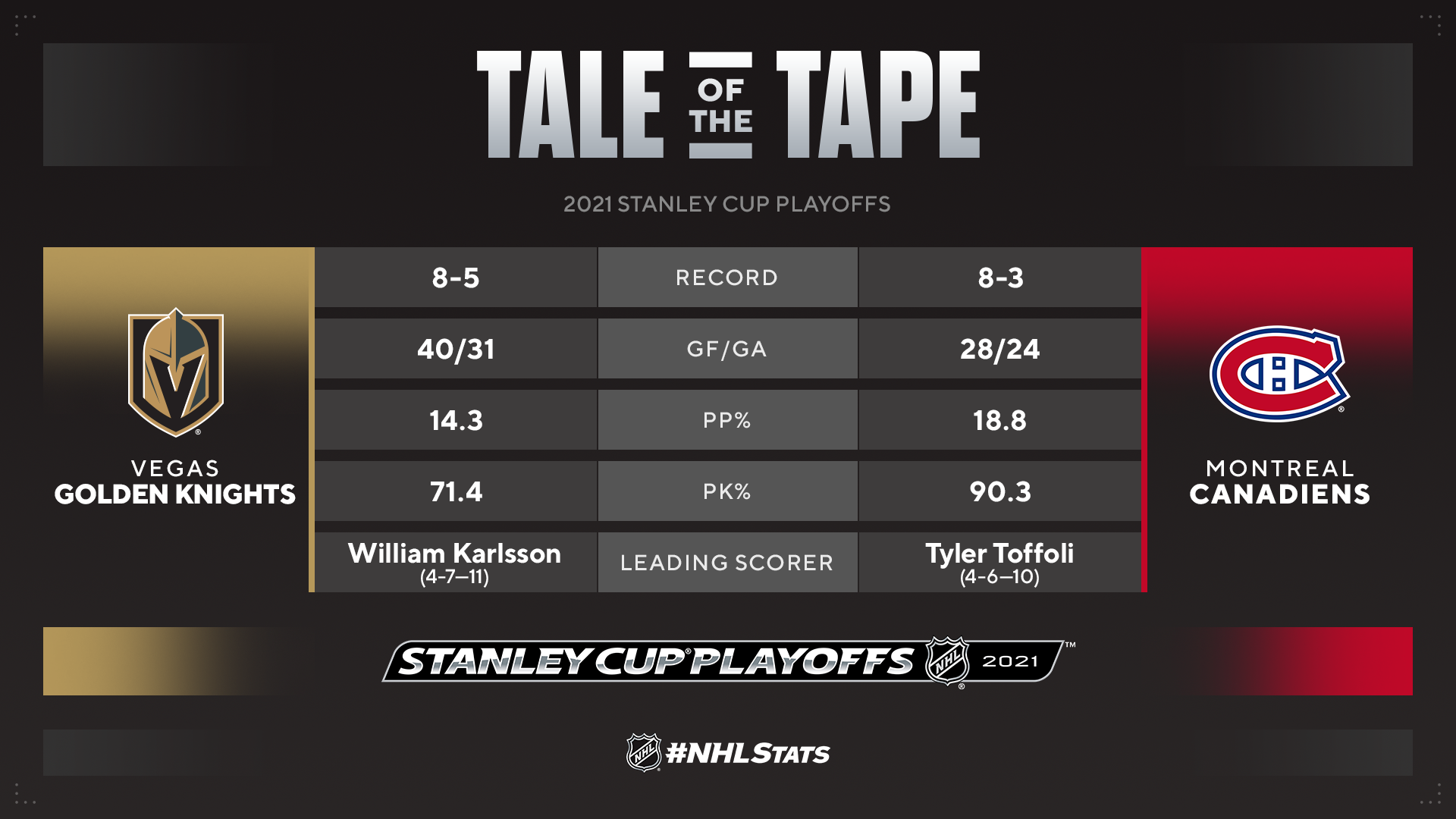 VEGAS VICTORY LOCKS IN FINAL FOUR BRACKET, SCHEDULE FOR NEXT ROUND
After being the first team to clinch a playoff berth this season, the Golden Knights were the last to emerge from their division, completing the Stanley Cup Semifinals bracket.

* Vegas’ win also locked in the dates, start times and television information for the Stanley Cup Semifinals, which begin Sunday, June 13 in Tampa when the defending champion Lightning host the Islanders in a rematch of their series from last year. 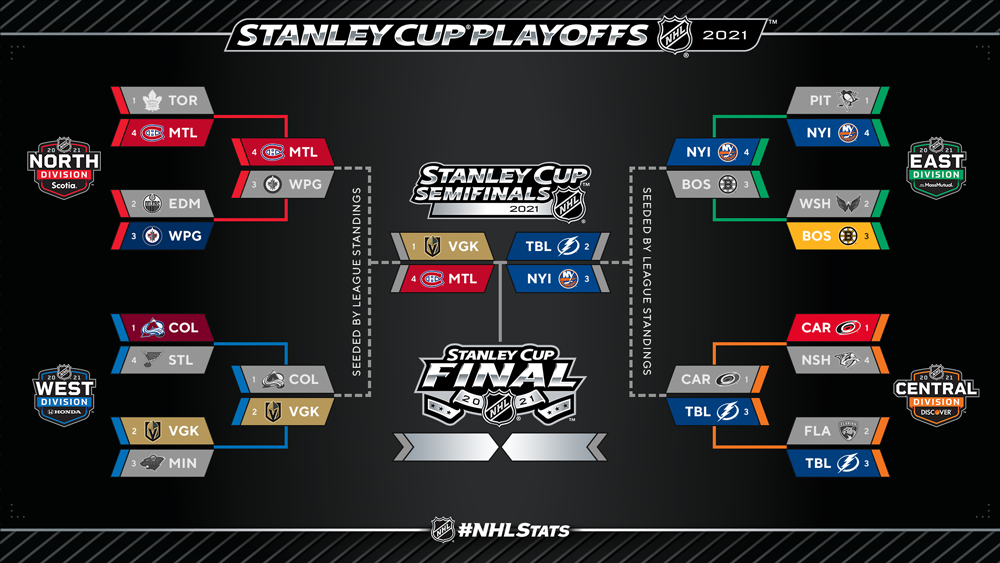 CLARENCE S. CAMPBELL BOWL, PRINCE OF WALES TROPHY TO BE PRESENTED
The NHL announced today that the winner of the Golden Knights–Canadiens series will receive the Clarence S. Campbell Bowl, while the Lightning and Islanders will compete for the Prince of Wales Trophy. 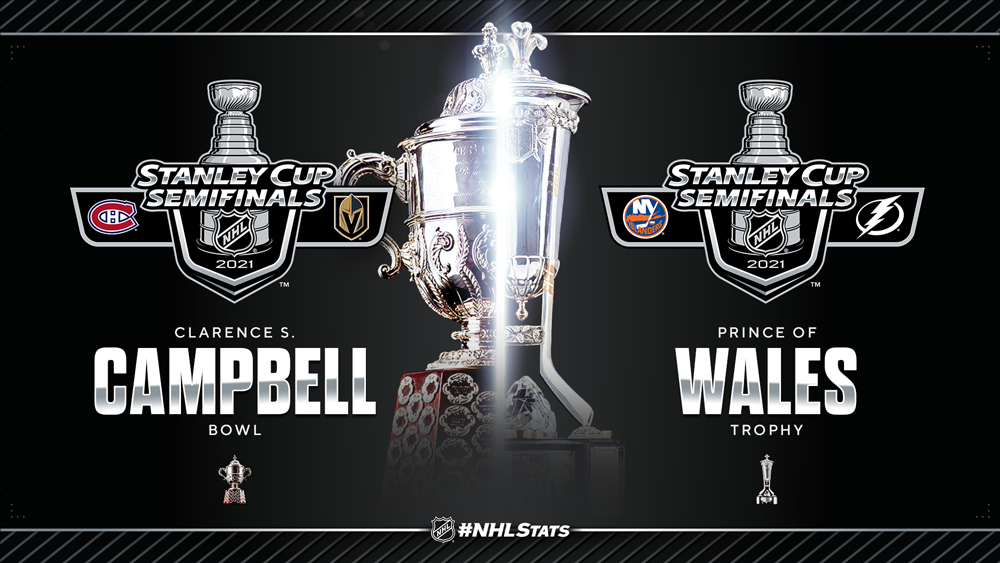 * Alex Pietrangelo (1-1—2) scored the second series-clinching goal of his NHL career – his first was in Game 7 of the 2019 Stanley Cup Final, powering St. Louis to its first-ever championship. He became the fifth active defenseman with two series clinchers, a cohort which includes teammate Alec Martinez (0-1—1) who also had a Stanley Cup-winning goal (also Victor Hedman, Duncan Keith & Kris Letang).

* Marc-Andre Fleury (30 saves), whose teams have reached the round before the Stanley Cup Final eight times, earned the 89th playoff win of his NHL career to surpass Billy Smith and Ed Belfour for sole possession of fourth place on the League’s all-time list. 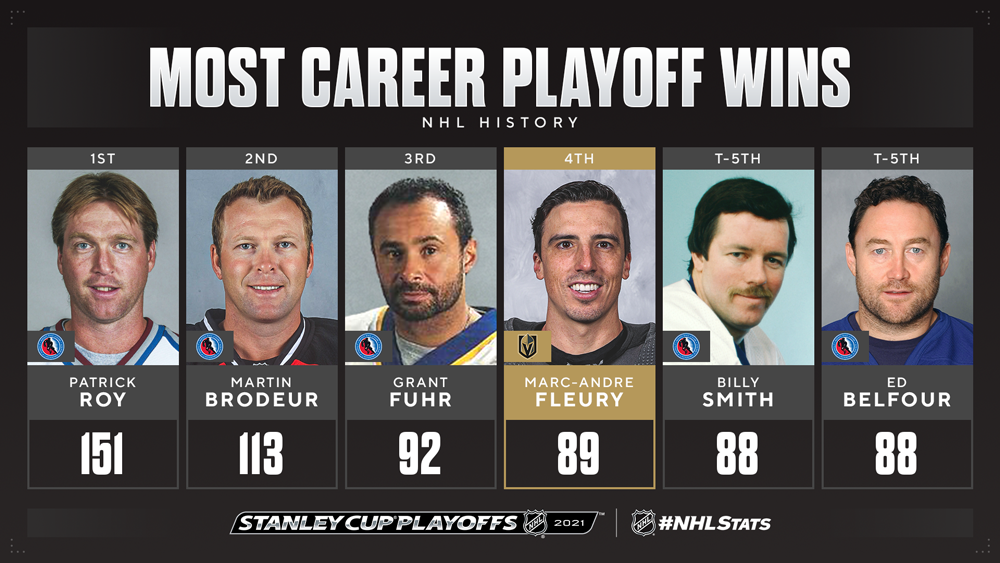 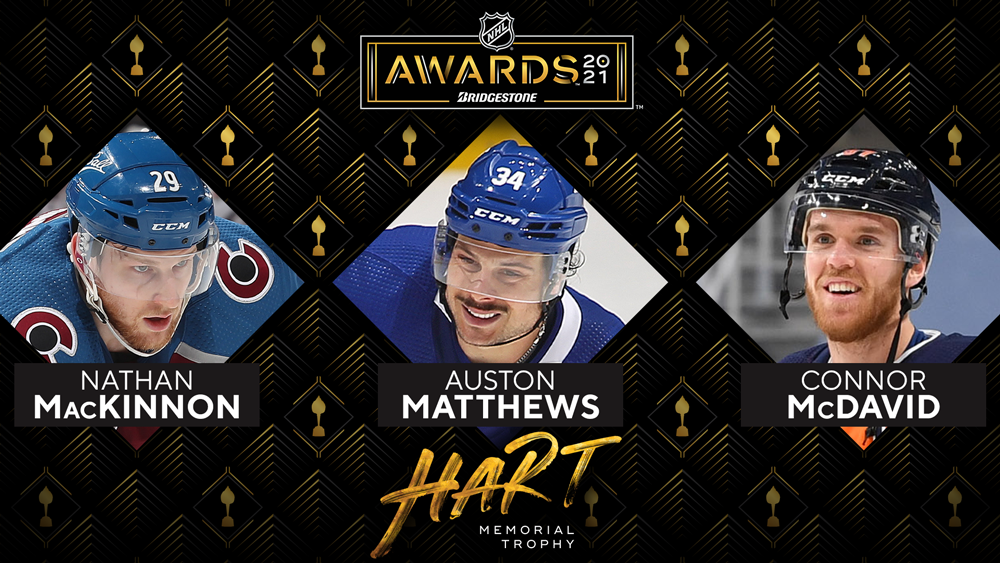 * MacKinnon, a finalist for the second straight year and third time overall after second-place finishes in both 2017-18 and 2019-20, can become the third Avalanche/Nordiques player to claim the Hart Trophy, following Joe Sakic (2000‑01) and Peter Forsberg (2002-03).

* Matthews was Toronto’s first Hart Trophy finalist since 1992-93, when Doug Gilmour finished second in voting. Matthews can become the third player in franchise history to win the award, after Babe Pratt (1943-44) and Ted Kennedy (1954-55).

* McDavid, who won the Hart Trophy in 2016-17, can become the fifth player in NHL history to capture the award multiple times before his 25th birthday (age as of final day of regular season). He would join Wayne Gretzky (6x), Bobby Orr (3x), Gordie Howe (2x) and Alex Ovechkin (2x).