* Game 1 of the 2021 Stanley Cup Final goes tonight at AMALIE Arena with both the Lightning and Canadiens looking to earn a pivotal series lead (8 p.m. ET on NBCSN, SN, TVAS, CBC).

* Canadiens rookie Cole Caufield aims to build on his storybook season during the Final, while Lightning captain Steven Stamkos will continue writing a different script from last postseason as a key contributor to Tampa Bay’s success in the 2021 Stanley Cup Playoffs.

LIGHTNING, CANADIENS FACE OFF IN GAME 1 TONIGHT
After 868 regular-season games and 79 playoff contests, two teams remain. The first instalment of the grand finale begins tonight at 8 p.m. ET with Game 1 of the 2021 Stanley Cup Final between the Lightning and Canadiens. 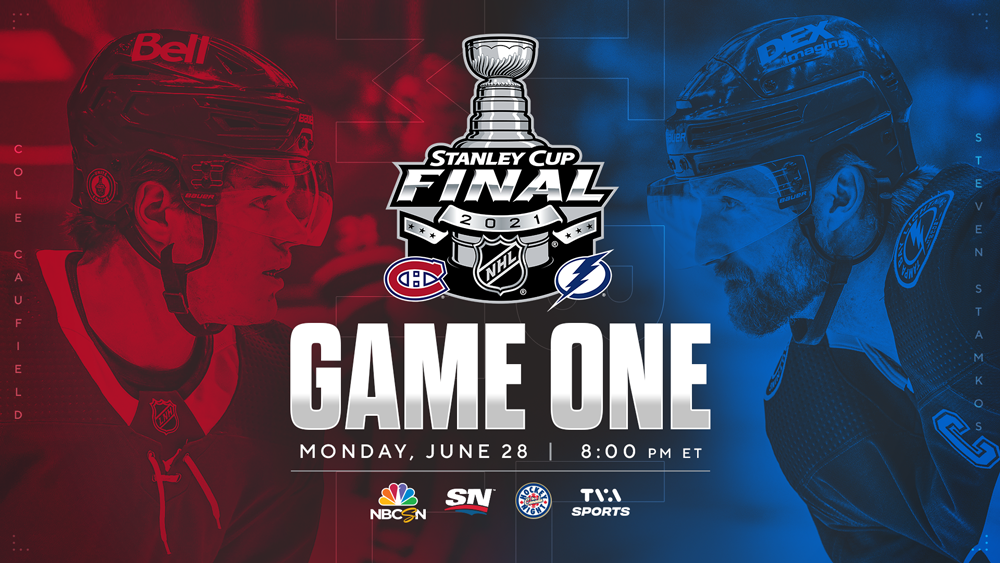 * In three previous Stanley Cup Final appearances, the Lightning lost Game 1 of the series each time but went on to win the series twice (2004 & 2020). The Canadiens own an all-time record of 15-2 (.882) when winning the first game of a best-of-seven Stanley Cup Final.

Cole Caufield (4-5—9 in 15 GP) will look to continue his storybook season which started at the University of Wisconsin and included a gold medal at the 2021 World Junior Championship, as well as a Hobey Baker Memorial Award as the top NCAA men’s ice hockey player.

* The 20-year-old has scored four goals in the 2021 Stanley Cup Playoffs, all in the last round against Vegas. The only other player with four or more goals since the start of the 2021 Stanley Cup Semifinals is playoff goals leader Brayden Point (6).
* Caufield has shown he can score at all levels – he has combined for 41 goals in 2020-21, amassing 30 as a member of the Wisconsin Badgers in the NCAA’s Big Ten, three with the AHL’s Laval Rocket, four regular-season tallies with the Canadiens on top of his four in the playoffs. 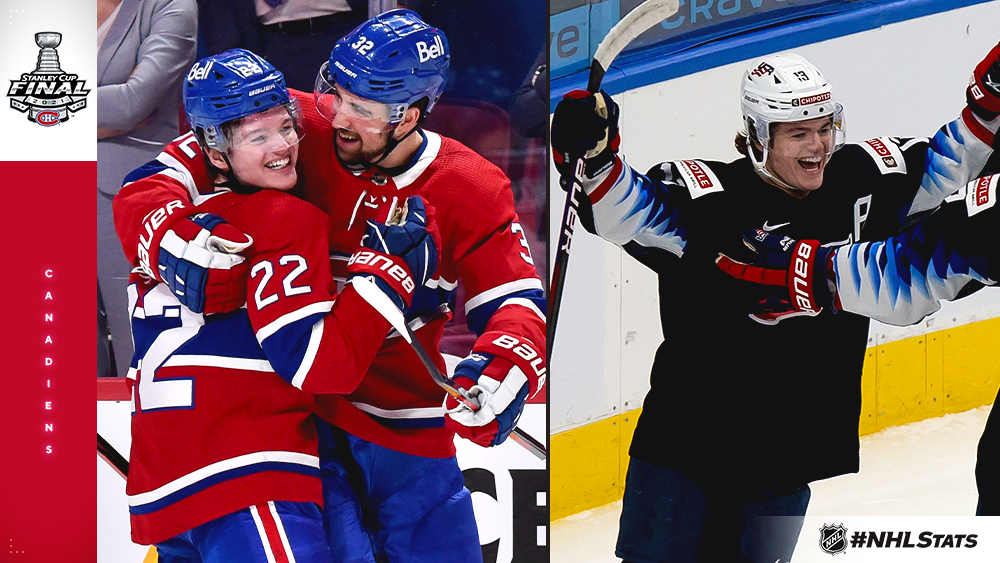 Following a championship run where Steven Stamkos played only 2:47 of the 2020 Stanley Cup Playoffs due to injury – including a storybook moment that featured a dramatic goal off his first shot in Game 3 of the Final – the Lightning captain has written a different script as a healthy, integral component to Tampa Bay’s success this postseason.

A pair of Vezina Trophy winners will look to backstop their team to a Stanley Cup when Tampa Bay’s Andrei Vasilevskiy (.936 SV%, 1.99 GAA, 4 SO) and Montreal’s Carey Price (.934 SV%, 2.02 GAA, 1 SO) meet in a much anticipated battle of star goaltenders. They each rank among the top three in both save percentage and goals-against average this postseason.

* Vasilevskiy and Price have met in a playoff game just once, during the 2015 Second Round when then-rookie Vasilevskiy relieved Ben Bishop in Game 4, a contest Montreal won 6-2. The two goaltenders have seen more of each other in the regular season, with Vasilevskiy yet to lose in regulation against Price. 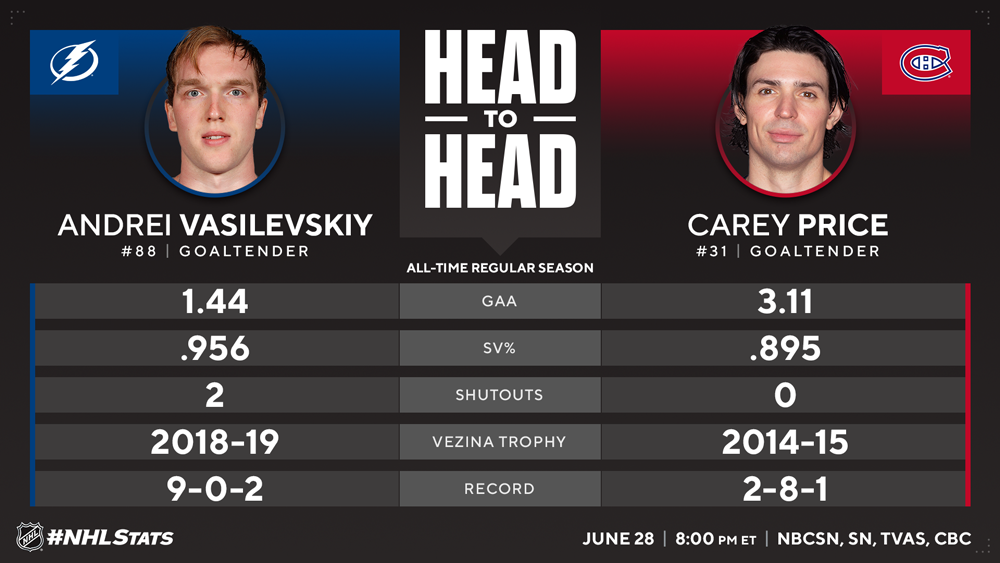 * Vasilevskiy and Price, recipients of the Vezina Trophy in 2018-19 and 2014-15, respectively, are set to become the first pair of Vezina Trophy winners to appear against each other in a Stanley Cup Final game since 1999 (Ed Belfour w/ DAL vs. Dominik Hasek w/ BUF). 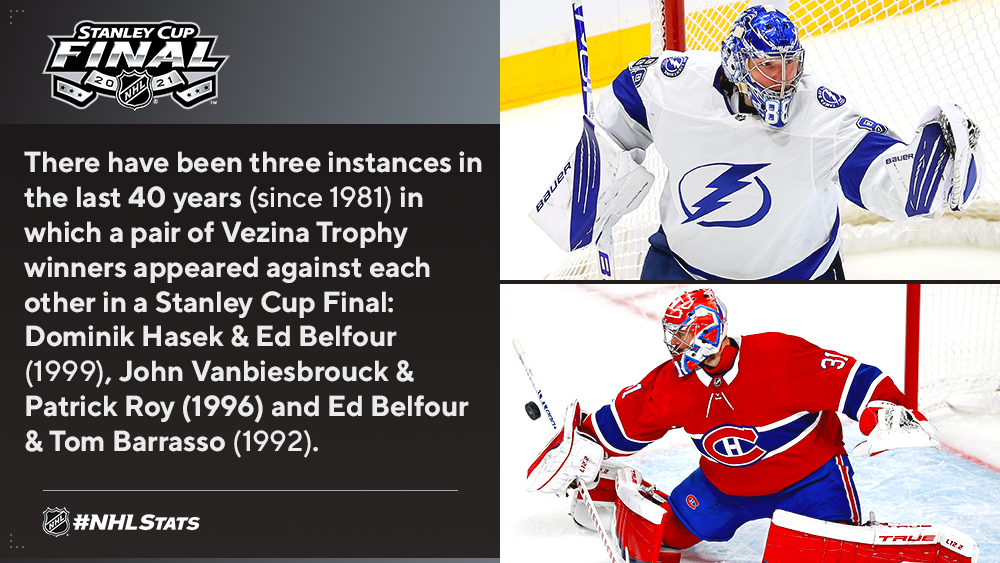