* The Lightning return to AMALIE Arena with another chance to win their third Stanley Cup in franchise history – a place where they have averaged 4.09 goals per game played in the 2021 postseason.
* Tampa Bay has not lost consecutive games in the Stanley Cup Playoffs since being swept by the Blue Jackets in the 2019 First Round – a streak spanning 47 contests.

* Nick Suzuki helped the OHL’s Guelph Storm overcome a 3-0 series deficit during the 2019 playoffs and looks to aid Montreal in doing the same when he takes to the ice in Game 5.

LIGHTNING RETURN TO AMALIE ARENA WITH CHANCE TO CLINCH AT HOME

The Lightning return home to AMALIE Arena with another opportunity to capture their second straight Stanley Cup after dropping Game 4 in overtime. Tampa Bay, without consecutive losses in the playoffs since the 2019 First Round, has recorded an NHL-leading eight home wins this postseason. 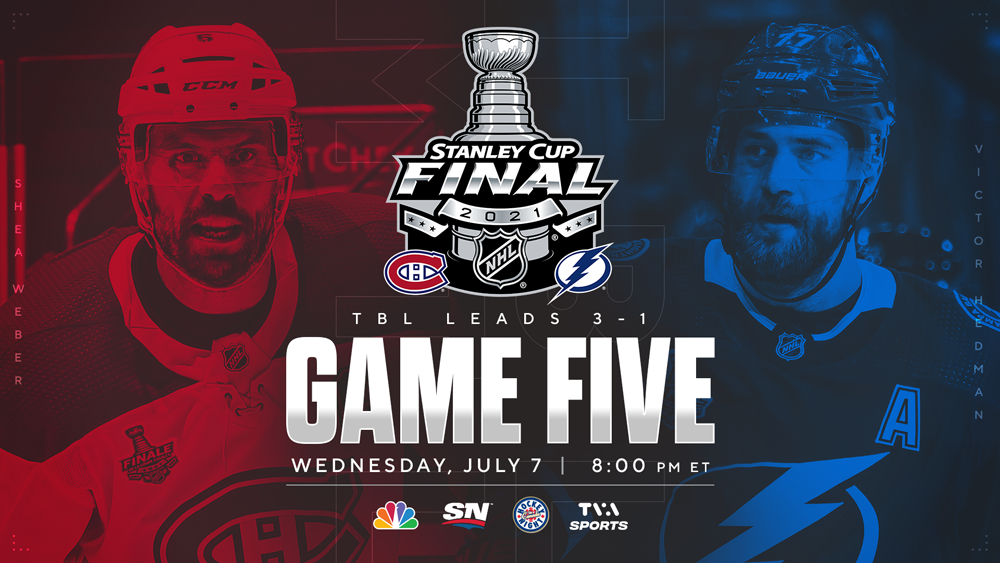 * A Stanley Cup-clinching win in Game 5 would mark the Lightning’s ninth victory at AMALIE Arena in the 2021 Stanley Cup Playoffs, tying the franchise mark for most in a single postseason first set in 2004 – a run that concluded with a 2-1 victory at St. Pete Times Forum over Calgary in Game 7 of the Final.

* The Lightning’s success at AMALIE Arena during this playoff run has also featured the club produce 4.09 goals per game played at home – the highest single-postseason total in franchise history. Since Tampa Bay skated in its inaugural season in 1992-93, only one Stanley Cup champion has generated a higher-such average on home ice in the playoffs: Colorado (4.36 GF/GP in 1996) 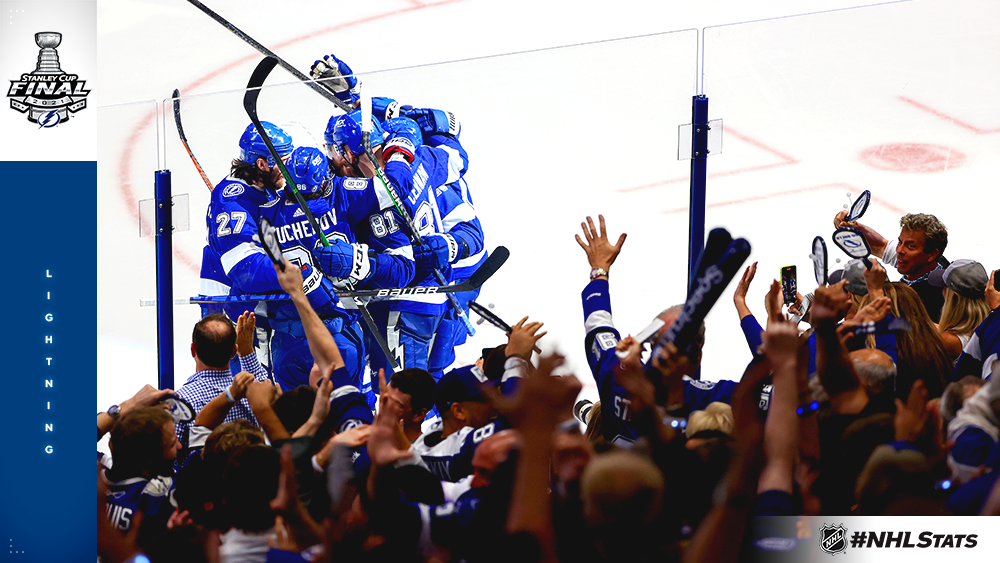 DEFENDING CHAMPS HAVE MADE A HABIT OF BOUNCING BACK

The hopes of hoisting the third Stanley Cup in franchise history tonight will once again rely on Tampa Bay’s resiliency following a loss in the postseason. The Lightning have not lost consecutive games in the Stanley Cup Playoffs since being swept by the Blue Jackets in the 2019 First Round – a streak spanning 47 contests.

* Andrei Vasilevskiy, the lone Lightning goaltender to mind the crease through all 47 of those contests, has benefited from that stretch and stands as the NHL’s only netminder with more than 20 playoff wins since 2020 (33-14). In fact, Vasilevskiy owns a career record of 17-7 following a postseason loss (2.06 GAA, .926 SV%, 4 SO).

* Overall, Vasilevskiy is 6-0 immediately following a loss in the 2021 postseason, including three shutouts. He can register seven such wins in a single postseason for the second time in as many years (also 7-0 in 2020). 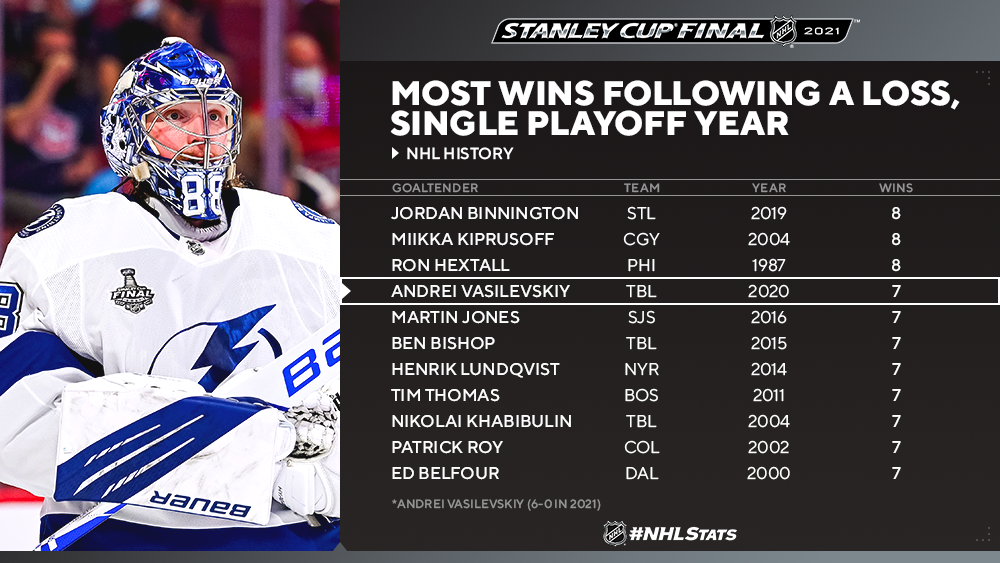 The Canadiens will look to keep their season alive with another win to avoid elimination, after taking their first lead of the series in Game 4 and securing their sixth overtime victory of the 2021 Stanley Cup Playoffs – tied for fifth most by a team in a single postseason in NHL history. While Tampa Bay has been dominant at home, Montreal has successfully played spoiler as the visitor throughout its playoff run.
* Montreal has seven road wins in the 2021 Stanley Cup Playoffs, tied with Tampa Bay for the most among all teams. The Canadiens have the opportunity to establish a franchise record for most wins as visitors in a single postseason with a win tonight in Game 5 at AMALIE Arena, which would surpass their mark in 1989 (7).

* Overall, Montreal has won four straight games when facing elimination in the 2021 Stanley Cup Playoffs, after battling back from a 3-1 deficit in the opening round against Toronto (Game 5, Game 6 & Game 7 of R1 and Game 4 of SCF). 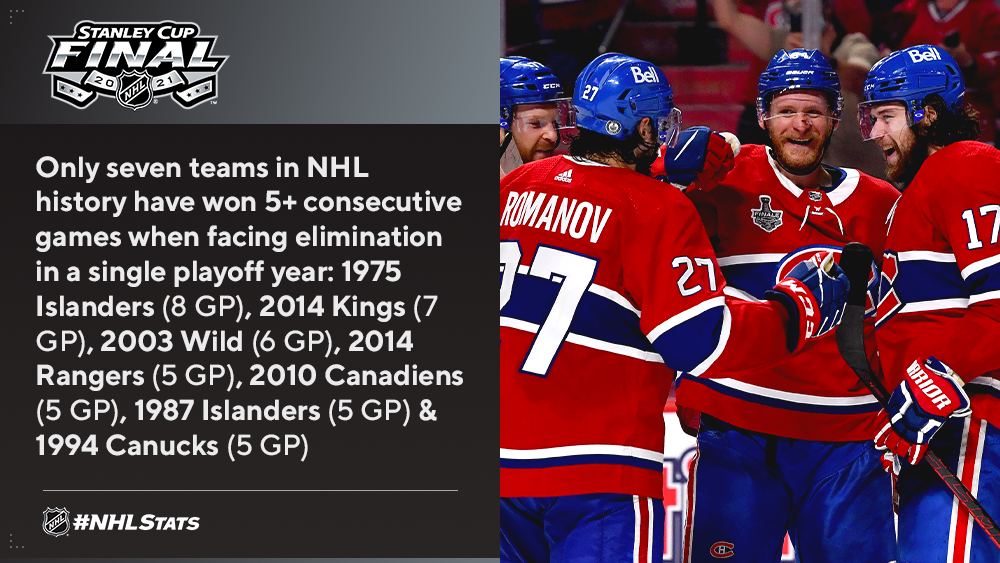 WILL THE STANLEY CUP FINAL GO TO GAME 6?

* The 2021 Stanley Cup Final is the third time in which Tampa Bay has taken a 3-0 series lead against Montreal, with the Canadiens avoiding a sweep for the second time (also 2015 R2). During the 2015 Second Round, Carey Price (24 saves) helped Montreal win Game 5 before Nikita Kucherov’s second career three-point outing helped Tampa Bay advance to the Conference Finals in Game 6. 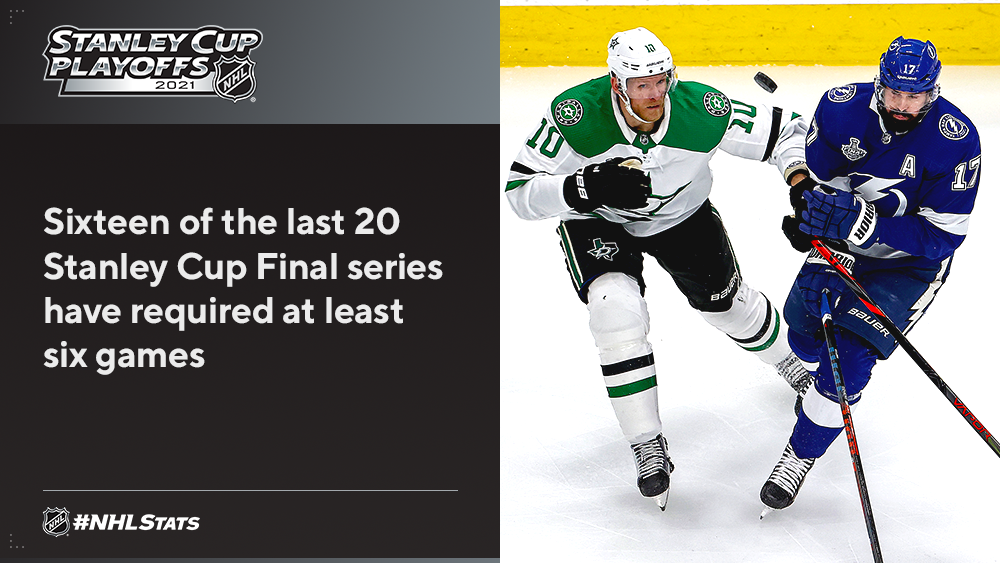 * Goodrow (1-3—4 in 4 GP) and Coleman (2-2—4 in 4 GP) have both found the score sheet in each game of the 2021 Stanley Cup Final, marking the longest playoff point streaks of their careers. Only two Lightning players have recorded longer such runs in the Stanley Cup Final: Nikita Kucherov (1-7—8) and Brayden Point (5-3—8) each posted five-game stretches in 2020. 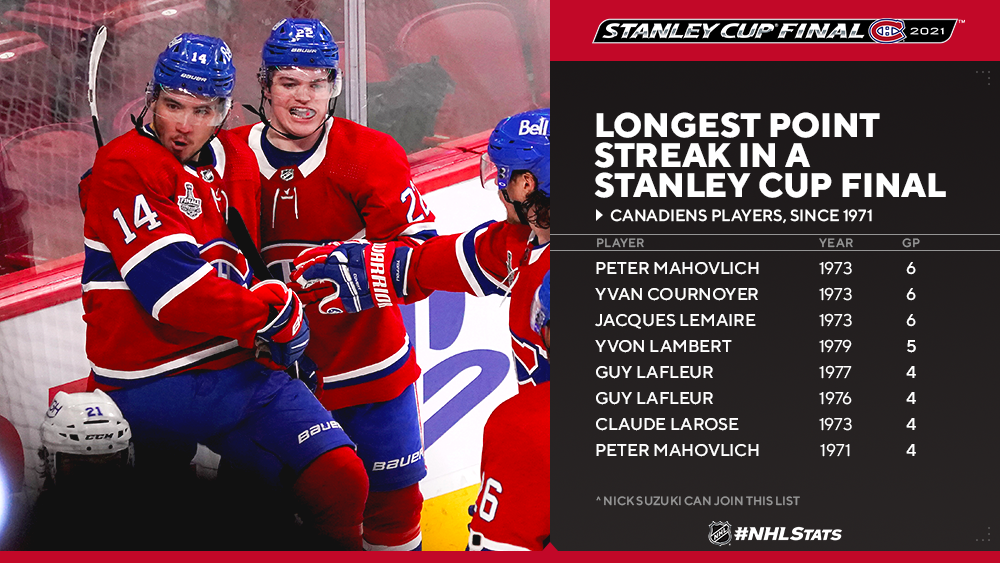 * Suzuki is also no stranger to overcoming a 3-0 series deficit. The forward was an instrumental part of the Guelph Storm besting the top-seeded London Knights in the Second Round of the 2019 OHL Playoffs after falling behind 3-0. After that comeback, he also helped the club erase 3-1 and 2-0 series deficits in the Western Conference Championship series and OHL Championship series, respectively. Suzuki concluded that playoff run with a single-season franchise record 42 points (16-26—42 in 24 GP) before hoisting the J. Ross Robertson Cup as OHL champion and earning the Wayne Gretzky 99 Award as playoff MVP.