* Cole Caufield collected an assist on the winning goal to record his third overtime point this postseason.

* The Canadiens and Lightning contested the 27th overtime game of the 2021 Stanley Cup Playoffs, with Montreal improving to 6-1 past regulation this postseason. 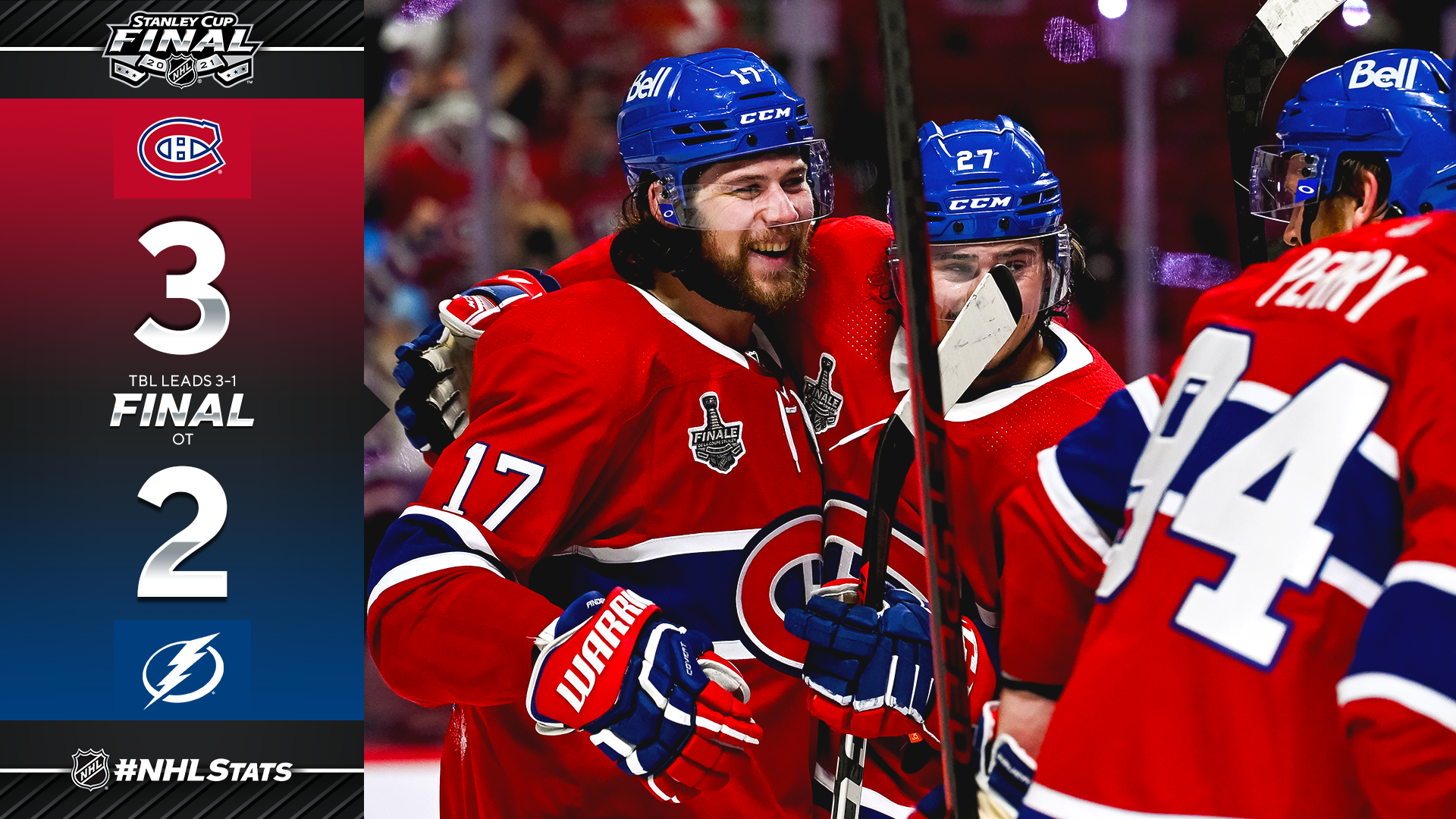 MONTREAL EDGES TAMPA BAY IN OVERTIME TO FORCE GAME 5 AT AMALIE ARENA
Josh Anderson (2-0—2) scored the winner at 3:57 of overtime – after the Canadiens thwarted a four-minute Lightning power play that spanned into the extra frame – as Montreal kept its season alive and forced Game 5 in the 2021 Stanley Cup Final, tomorrow in Tampa (8 p.m. ET on NBC, SN, TVAS, CBC).

* The Canadiens won in overtime when facing elimination in the Stanley Cup Final for the third time, following Game 5 victories in both 1954 (Ken Mosdell vs. Detroit Red Wings) and 1919 (Jack McDonald vs. Seattle Metropolitans). Overall, it was the 14th such victory by any club in NHL history and second in as many years against the Lightning – current Canadiens forward Corey Perry, then with the Stars, beat Andrei Vasilevskiy at 9:23 of the second overtime in Game 5 of the 2020 Final.

* Anderson, who also opened the scoring on Monday, capped a multi-goal outing with the overtime winner for the second time this postseason (also Game 3 of SCSF). He became the eighth player in franchise history to score multiple overtime goals in one playoff year and first since 1993, when Guy Carbonneau, John LeClair and Kirk Muller had two apiece.

* Anderson became the sixth player in NHL history to have at least two multi-goal games in one playoff year that each included an overtime goal and first since his current assistant coach Alexandre Burrows did so in 2011 (w/ VAN). The four other players to achieve the feat were Steve Payne in 1981 (w/ MNS), Esa Tikkanen in 1991 (w/ EDM), Joe Sakic in 1996 (w/ COL) and Joe Nieuwendyk in 1999 (w/ DAL). 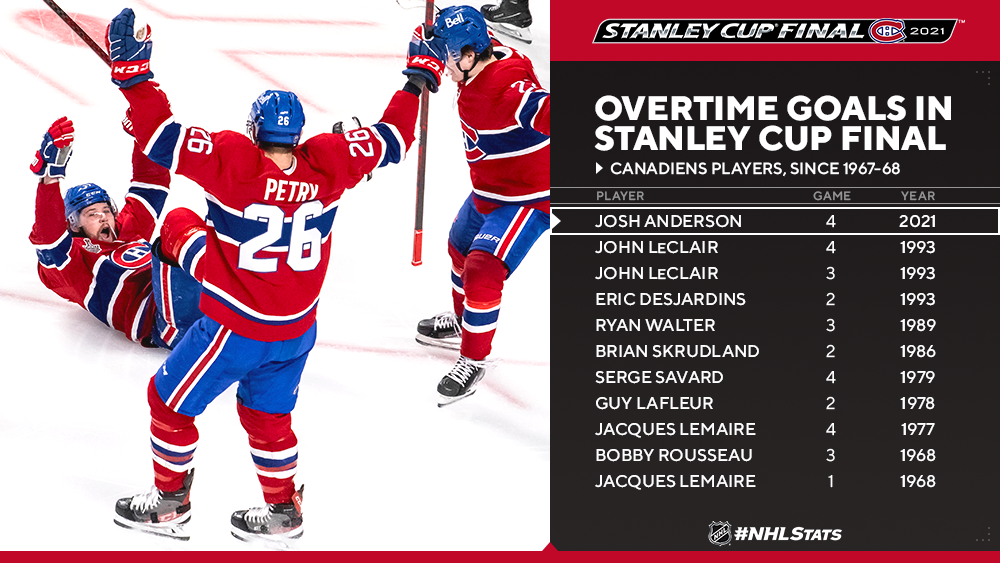 CAUFIELD COMES UP CLUTCH ONCE AGAIN IN OVERTIME

After notching an assist on the game’s opening goal, Cole Caufield (0-2—2) collected the lone assist in overtime to become the youngest player in franchise history to record multiple points when facing elimination in the Stanley Cup Final. 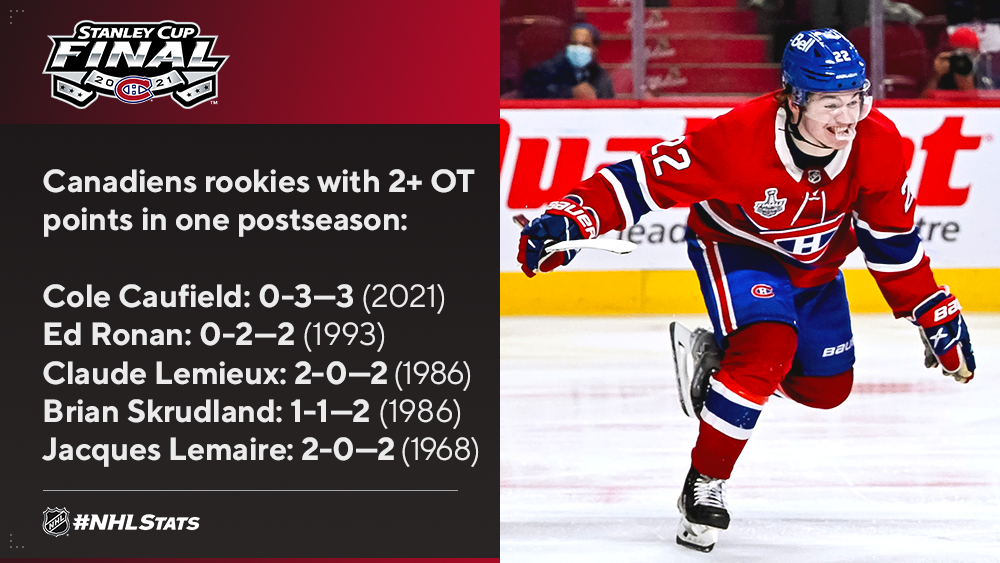 * Caufield (20 years, 184 days) became the second-youngest player in NHL history to record multiple points in a game to help his team avoid elimination in the Stanley Cup Final. The only player younger than Caufield to record multiple points in a victory while facing elimination from the championship series was Bob Goldham (19 years, 337 days), who notched 1-1—2 for the Maple Leafs in Game 5 of the 1942 Final – the second of four straight victories for Toronto as it became the first team in NHL history to overcome a 3-0 series deficit to win in the Final.

* The Canadiens improved to 6-1 past regulation this postseason, marking the ninth time in NHL history that a team has claimed as many overtime victories in one playoff year. 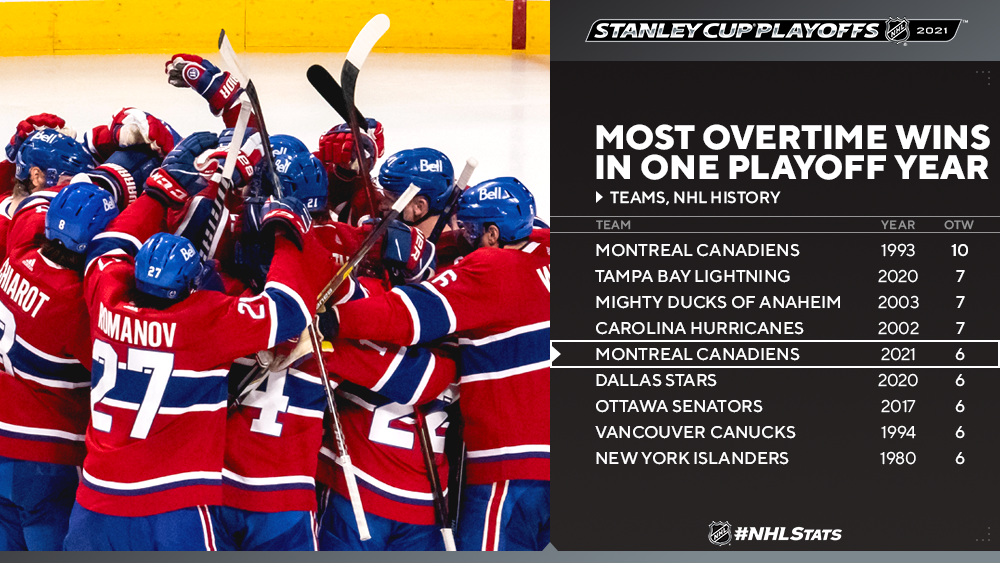 * The Lightning, meanwhile, remain one victory from capturing a second straight Stanley Cup despite falling to 0-4 in overtime in 2021 – a far cry from their run last year in which they went 7-2 after regulation and played an NHL-record 221:14 of overtime. The last time a team won the Cup without any overtime victories was 1983 when the Islanders won without ever requiring extra time.

* The Canadiens won a potential elimination game in the Stanley Cup Final for the first time since 1971, when they edged the Black Hawks in back-to-back contests to overcome a 3-2 series deficit and claim their 16th Stanley Cup (since 1917-18). Montreal owns an all-time record of 12-8 when facing elimination in the Final, including an 8-1 mark at home.

* The Canadiens’ victory marked the eighth instance in NHL history in which a team won Game 4 in a Stanley Cup Final after dropping each of the first three contests. Three of those clubs extended the series to at least six games.

* Alexander Romanov, who made his first appearance since Game 1 of the Stanley Cup Semifinals, scored the first playoff goal of his NHL career. He became the fourth Canadiens player age 21 or younger with at least one goal this postseason, following Suzuki (7), Jesperi Kotkaniemi (5) and Cole Caufield (4).

* Montreal’s victory extends the Stanley Cup Final to at least five games, marking the 22nd consecutive postseason that the NHL’s championship series will not be a sweep. 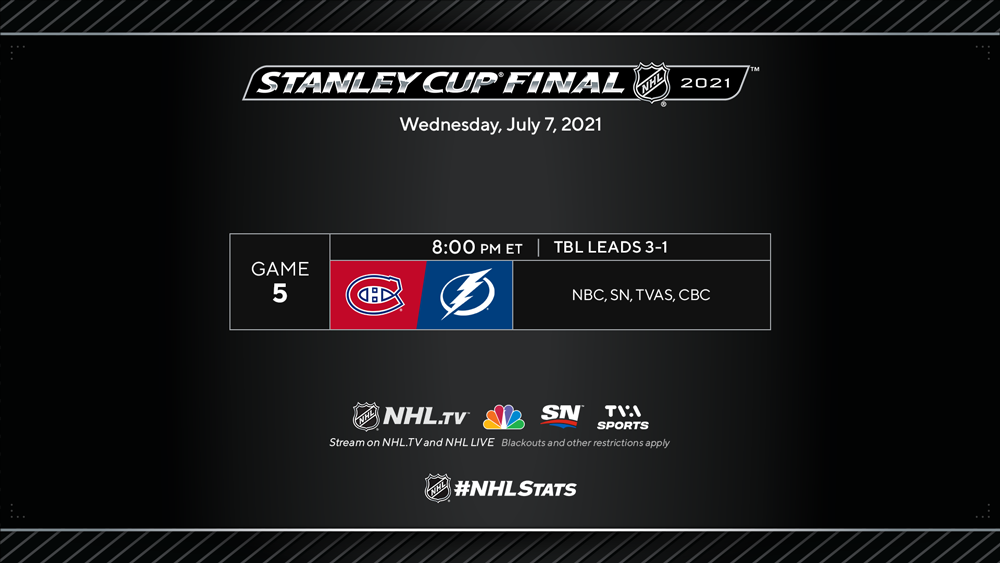