* The 2021 Stanley Cup Final shifts north for Game 3, where Tampa Bay and Montreal will meet in the NHL’s first-ever playoff or regular-season contest scheduled during the month of July.

* The Canadiens will host a Stanley Cup Final game in a venue other than the Montreal Forum for the first time in nearly a century as they try to claim their first win of the series.

* Andrei Vasilevskiy has limited the Canadiens to only two goals on 62 shots in the Final and enters Game 3 with only two goals against in his past three outings. 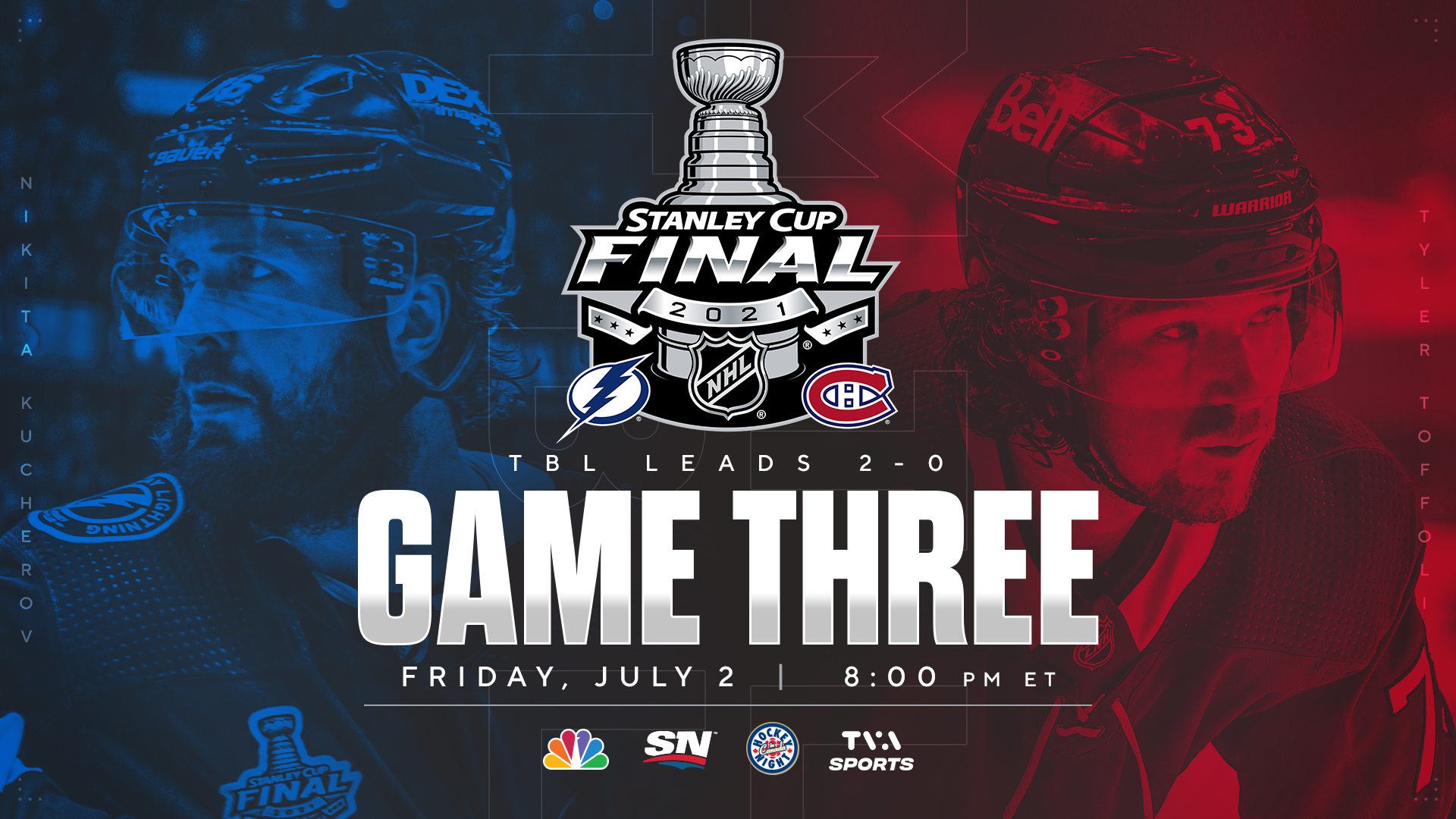 FINAL SHIFTS TO MONTREAL FOR NHL’S FIRST-EVER PLAYOFF GAME IN JULY
After closing July 2020 with 12 exhibition games in bubbles in Toronto and Edmonton, the NHL will open July 2021 in Montreal where the Canadiens will host the Lightning in the first-ever playoff or regular-season game scheduled in the month of July.

* Friday will also mark the first Stanley Cup Final contest in Montreal since June 9, 1993, when Paul Di Pietro pocketed two goals to power the Canadiens to a championship-clinching win over the Kings at the Montreal Forum in Game 5. The last time any Canadian-based club contested a Final game on home ice was June 15, 2011, when current Canadiens assistant coach Alexandre Burrows and the Canucks fell to the Bruins at Rogers Arena in Game 7.

* The Canadiens will be the home team for a Stanley Cup Final game at a venue other than the Montreal Forum for the first time in nearly a century. The only Final in NHL history in which Montreal played home games at an arena other than the storied Forum was in 1924 when it swept a best-of-three series against the Calgary Tigers of the WCHL with wins at Mount Royal Arena and Ottawa Auditorium – both as the home team. 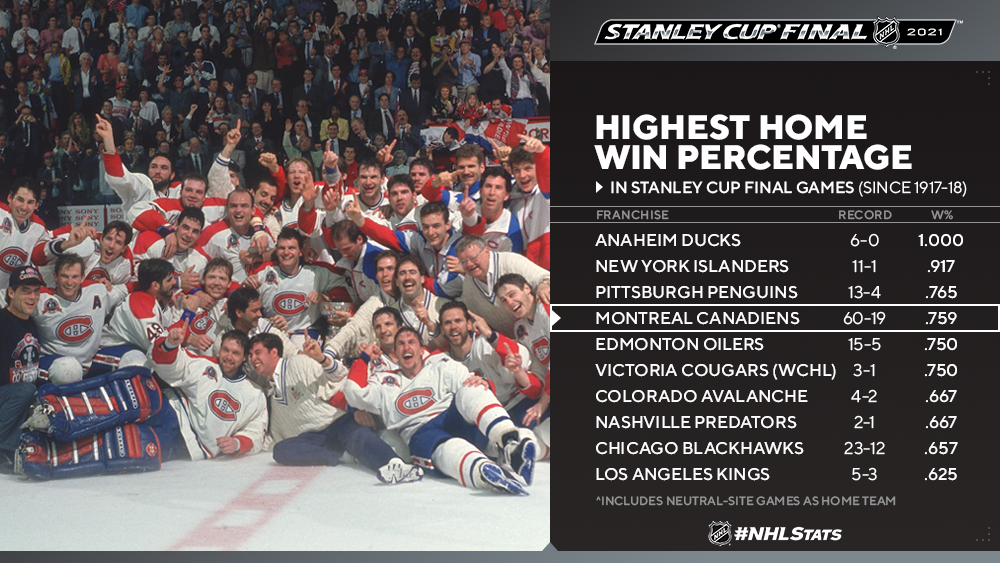 HOW WILL HISTORY DISPLAY ITSELF IN 2021 STANLEY CUP FINAL?

With the Lightning two wins from hoisting their third Stanley Cup and the Canadiens facing a 2-0 series deficit in the Final for the fifth time in their history, a look back at how previous matchups have unfolded under similar circumstances:

* The Lightning hold a 2-0 series lead for the third time this postseason and ninth time in franchise history, claiming victory in each previous occurrence (including twice vs. MTL). Tampa Bay went on to win Game 3 in three of the previous eight matchups: both times against Montreal (2004 CSF and 2015 R2) and once against Washington (2011 CSF). 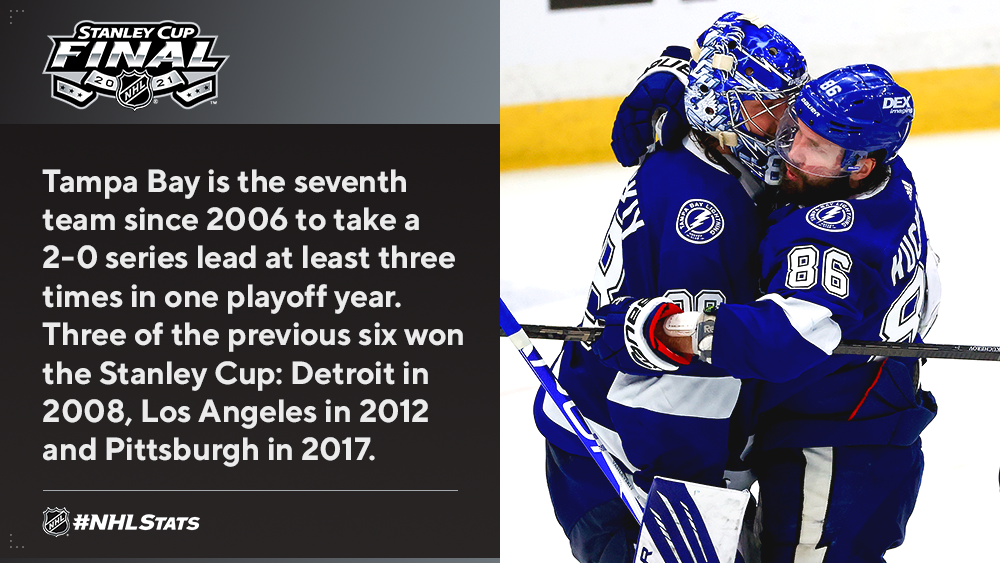 * The Canadiens find themselves down 2-0 in the Stanley Cup Final for just the second time in the expansion era (since 1967-68) and fifth time overall. Montreal claimed a Game 3 victory in each of the past three occurrences – 1971 against Chicago as well as 1966 and 1955, both against Detroit – and eventually won two of those series (1971 and 1966). In the 1952 Final, the Canadiens lost Game 3 to fall behind 3-0 and were eventually swept by the Red Wings, who allowed only two goals against over four games thanks to back-to-back shutouts by Terry Sawchuk (2 GA in 4 GP, 2 SO) to close the series.

* In addition to the two instances by Montreal noted above, three other clubs have won the Stanley Cup despite facing a 2-0 deficit in a best-of-seven Final, including two in the last 12 years. After losing each of the first two games on the road, the 2011 Bruins and 2009 Penguins returned home to claim back-to-back wins before again falling behind 3-2 in eventual seven-game series. Like Montreal, both Boston and Pittsburgh were held to two goals or fewer in each of their first two defeats. The other such comeback came in 1942 when the Maple Leafs trailed 3-0 before rallying past the Red Wings to clinch the Cup in Game 7.

After allowing four or more goals against four times in a span of 13 days from May 8-20 (5 GP), Andrei Vasilevskiy has done so only once in the 42 days since (17 GP) to pull the Lightning within two wins of a repeat.

* Vasilevskiy has allowed one goal or posted a shutout in half of his 20 appearances this postseason, including each of his last three outings and in five of nine road games. He is the 10th different goaltender in Stanley Cup Playoffs history to allow fewer than two goals in 10 or more starts in one year – Martin Brodeur (3x) is the only one to achieve the feat multiple times. 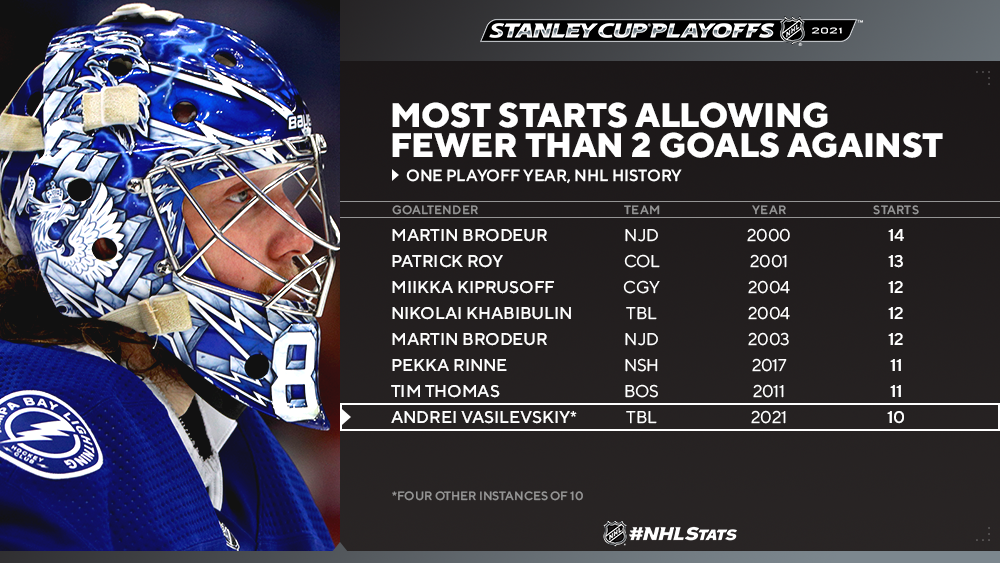 * The 2018-19 Vezina Trophy winner is the eighth different goaltender in the expansion era (since 1967-68) – and first since Jonathan Quick in 2012 – to hold the opposition to fewer than two goals in each of the first two games of the Stanley Cup Final. Quick (3 GP in 2012 w/ LAK) and Rogie Vachon (4 GP in 1969 w/ MTL) are the only goaltenders in that time frame to extend their run to at least three games.

* Vasilevskiy, the only goaltender to tend the Lightning crease in the playoffs since May 13, 2018 (55 GP), has posted 32 postseason wins since the start of the 2020 Stanley Cup Qualifiers – a number only eight other active goaltenders have attained in their entire careers.

Nick Suzuki, who scored Montreal’s lone goal in Game 2, leads the team with 2-5—7 in eight home games this postseason and has recorded at least one point in six of those contests. One of those points came overtime (Game 4 of R2) as the Canadiens have played past regulation in five of their last six home games – all since fans returned to Bell Centre in Game 6 of the First Round.

* The Canadiens are one of four teams in NHL history to require overtime in four or more consecutive home games within a playoff year, following the Coyotes in 2012, Sabres in 1993 and Blues in 1968. None of the three previous streaks extended to five games. 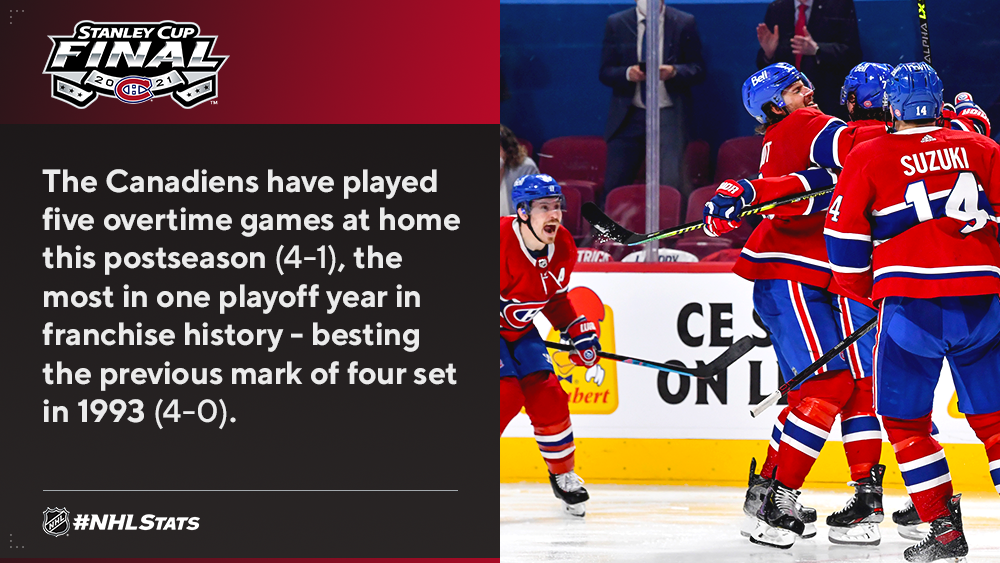