* The Panthers and Hurricanes remain unbeaten in 2021-22, while Alex Ovechkin and the Capitals also extended season-opening streaks.

* Ryan Getzlaf tied Teemu Selanne atop the Ducks’ all-time points lists as Anaheim overcame a three-goal deficit to pull even for the second time in as many days.

* Connor McDavid can record his seventh straight multi-point game as the Oilers visit the Canucks Saturday.

* Andrei Svechnikov (7-4—11 in 7 GP) and Sebastian Aho (5-5—10 in 7 GP) each found the score sheet and became the second set of Hurricanes/Whalers teammates to simultaneously open a campaign with at least one point in each of the club’s first seven games. Carolina has outscored opponents by a 31-11 margin this season, with its +20 goal differential leading the NHL. 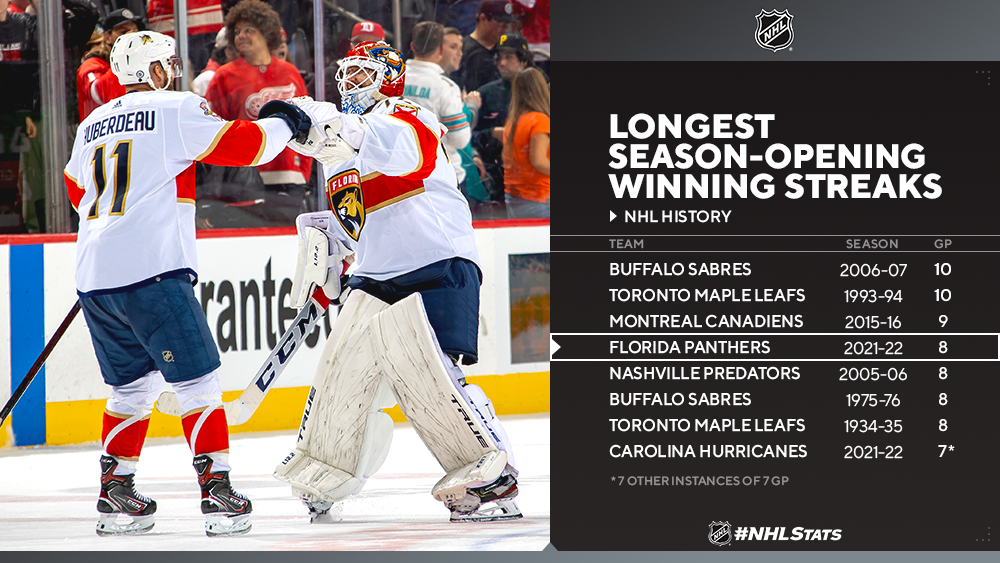 CAPITALS, OVECHKIN ALSO EXTEND SEASON-OPENING STREAKS
Alex Ovechkin (1-1—2) factored on both Washington goals as the Capitals blanked the Coyotes and improved to 5-0-3 (13 points) on the season. Ovechkin extended his season-opening point streak to eight games (9-6—15) and moved into a tie with Oilers captain Connor McDavid (7-8—15 in 6 GP) for the League scoring lead.

* Ovechkin scored the 739th regular-season goal of his NHL career to move within two of matching Brett Hull (741) for fourth place on the League’s all-time list. Ovechkin also recorded his 378th career multi-point game in the regular season to move past Luc Robitaille (377) and tie Denis Savard for 24th place in NHL history – Hull and Teemu Selanne are next on the list with 382 apiece. 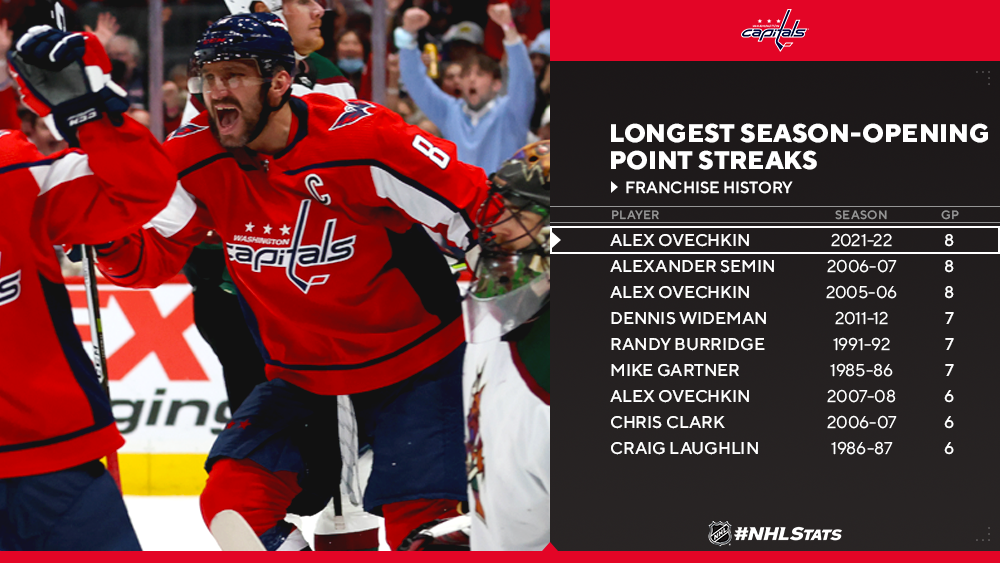 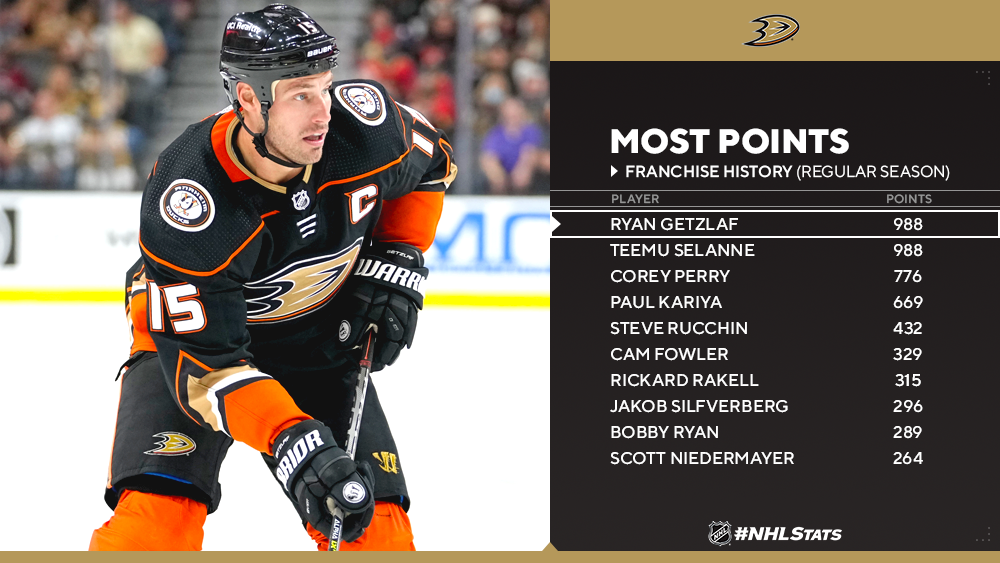 Connor McDavid and the Oilers will close out a 10-game Saturday, which features nearly 12 hours of hockey scheduled over the course of the day. 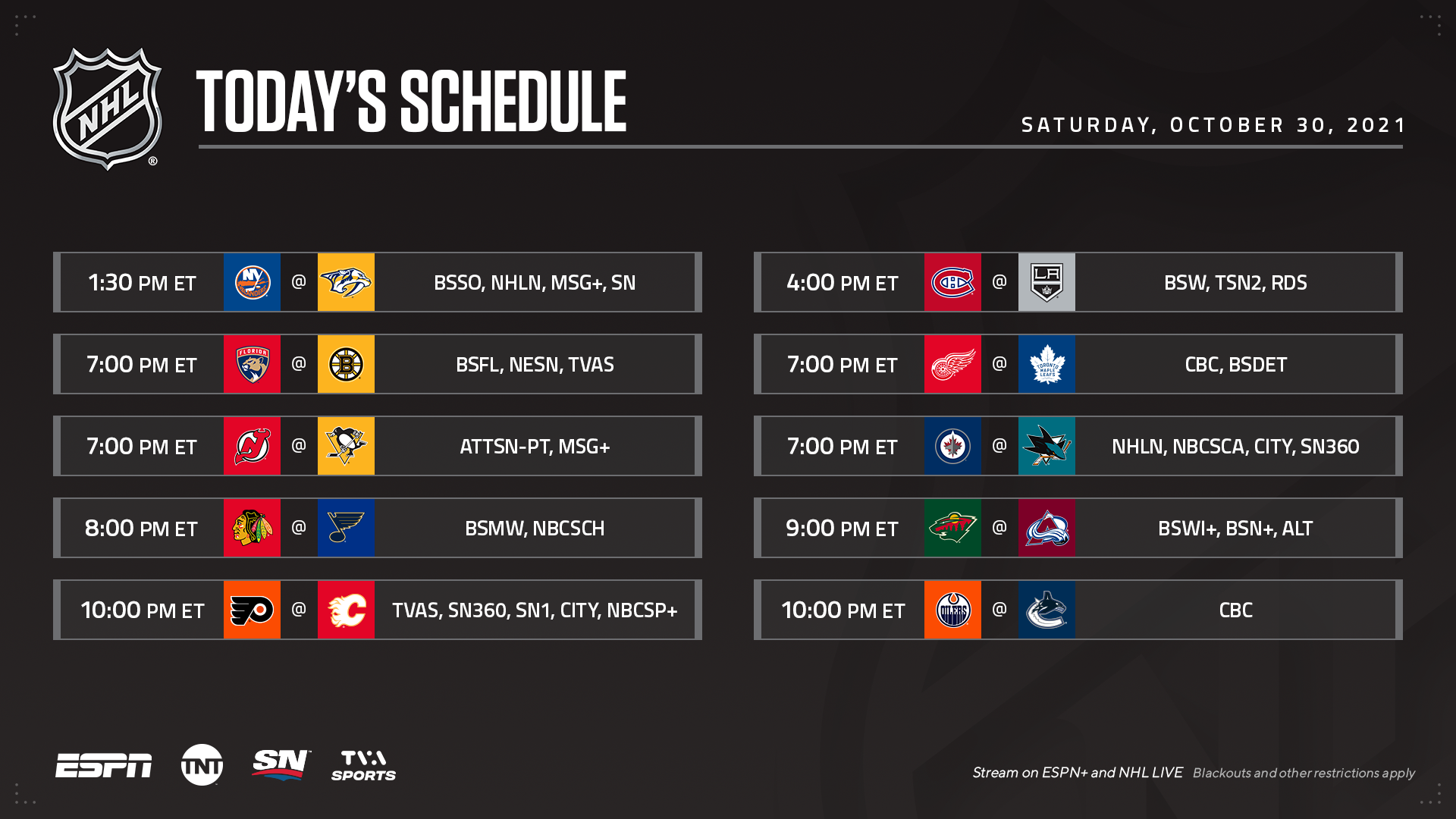 * McDavid can record his seventh straight multi-point outing to start the 2021-22 campaign when he faces off against the Canucks, the team he holds his highest career point total against (16-35—51 in 32 GP). The Oilers captain has an active 10-game point streak versus Vancouver dating to Jan. 14 and has averaged 2.40 points per game over that run (8-16—24).

* McDavid can become the sixth player in NHL history to start a season with a streak of seven or more consecutive multi-point games and first since Auston Matthews in 2018-19 (10-6—16 in 7 GP). 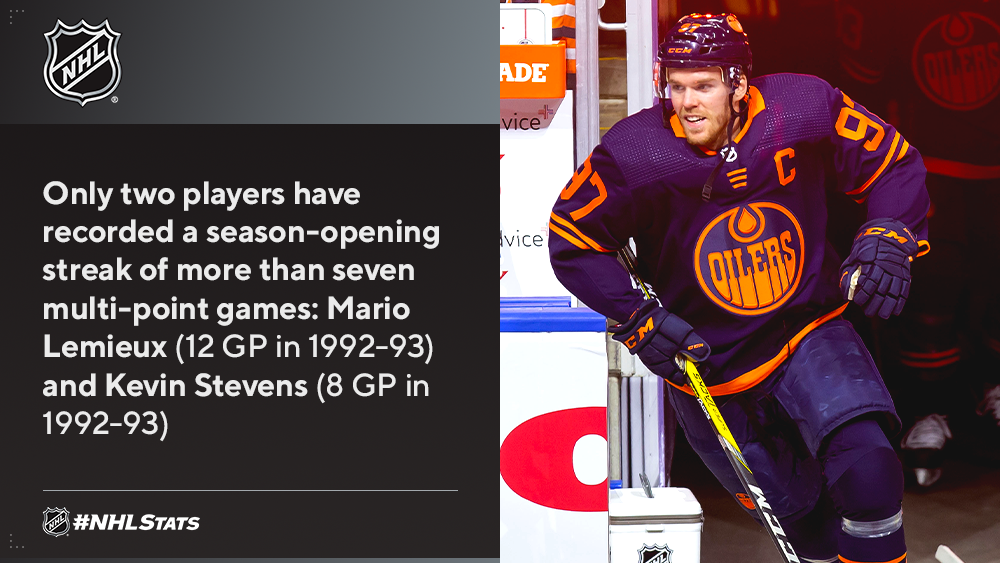