* Cale Makar recorded 1-1—2 to reach the 100-point milestone while skating in his 108th NHL game – tied for the sixth-fewest contests in League history to reach the mark among defensemen.

* The Hurricanes extended their season-opening win streak, while the Flames swept their five-game road trip in rare fashion.

* Alex Ovechkin can extend his season-opening point streak Friday as he approaches Brett Hull on the NHL’s all-time goals list.

MAKAR REACHES 100-POINT MILESTONE AS AVALANCHE SNAP BLUES’ STREAK
Cale Makar (1-1—2) factored on two of the Avalanche’s four goals to record his 100th career point (22-78—100 in 108 GP) and help snap the Blues’ season-opening win streak at five games. Makar required the sixth-fewest games in NHL history to reach the 100-point milestone among defensemen – it’s been 28 years since a blueliner hit the mark in as few contests. 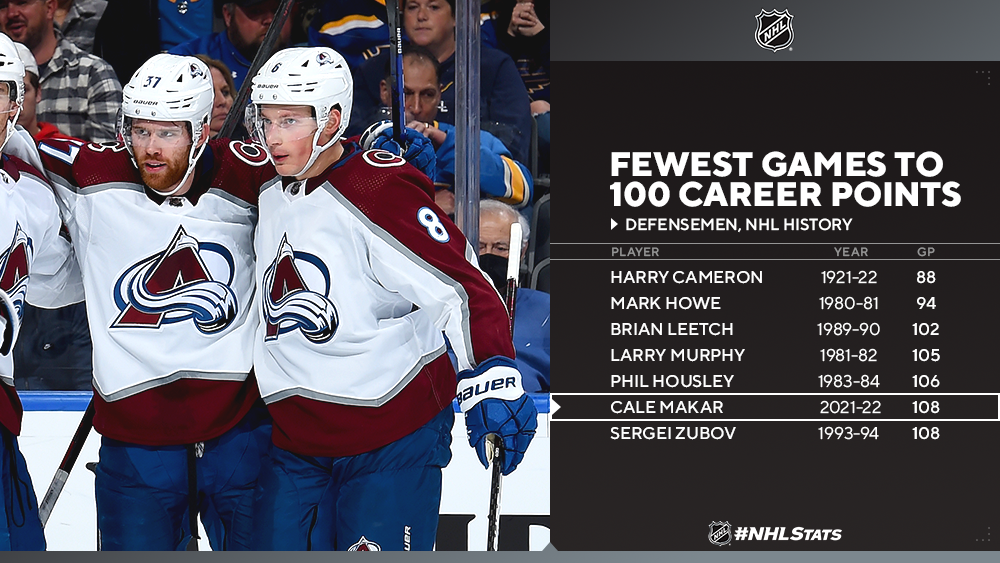 Frederik Andersen and Jacob Markstrom each posted perfect performances Thursday and backstopped their team to a sixth and fifth straight win, respectively:

* Andersen recorded his first shutout since March 5, 2020 to beat the Bruins and improve to 6-0-0 through six appearances with the Hurricanes, marking his second six-game win streak to begin his tenure with a franchise (also 6-0-0 in 2013-14 w/ ANA). Carolina established a franchise record for longest season-opening winning streak, surpassing its 5-0-0 start in 2019-20.

* Markstrom turned aside all 45 shots faced as the Flames blanked the Penguins to sweep their five-game road trip. Calgary, which never trailed at any point during its voyage, swept a road trip of five-plus games for the second time in franchise history (also 6-0-0 from Dec. 9-18, 2007). 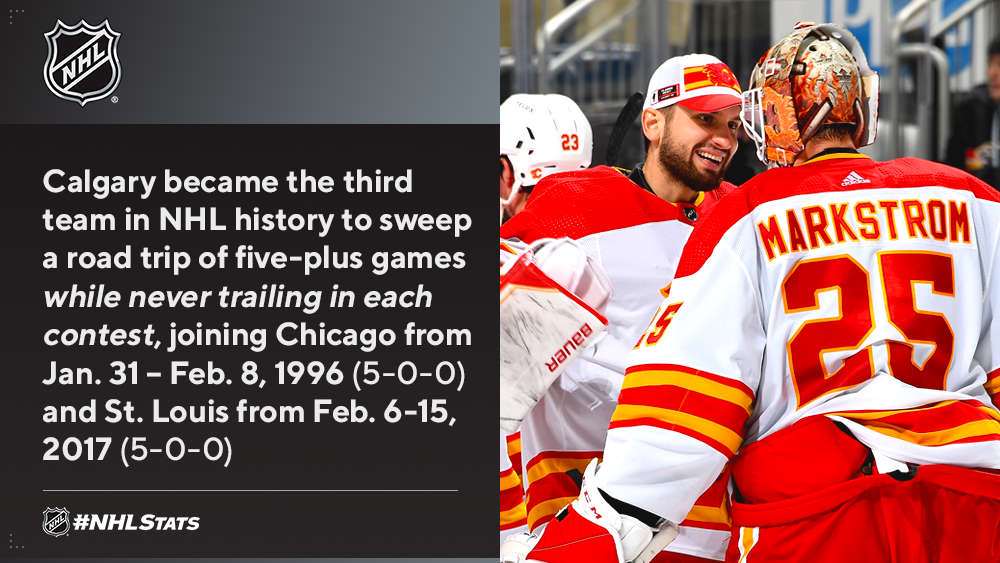 GOALS FOR FLEURY, FLURRY OF GOALS IN ANAHEIM FEATURED IN LIVE UPDATES
Haydn Fleury scored twice, while his former club nearly completed a three-goal comeback and Jake Allen posted a 45-save shutout – these notes and many more were featured in Thursday’s #NHLStats: Live Updates, which can be read in full here. 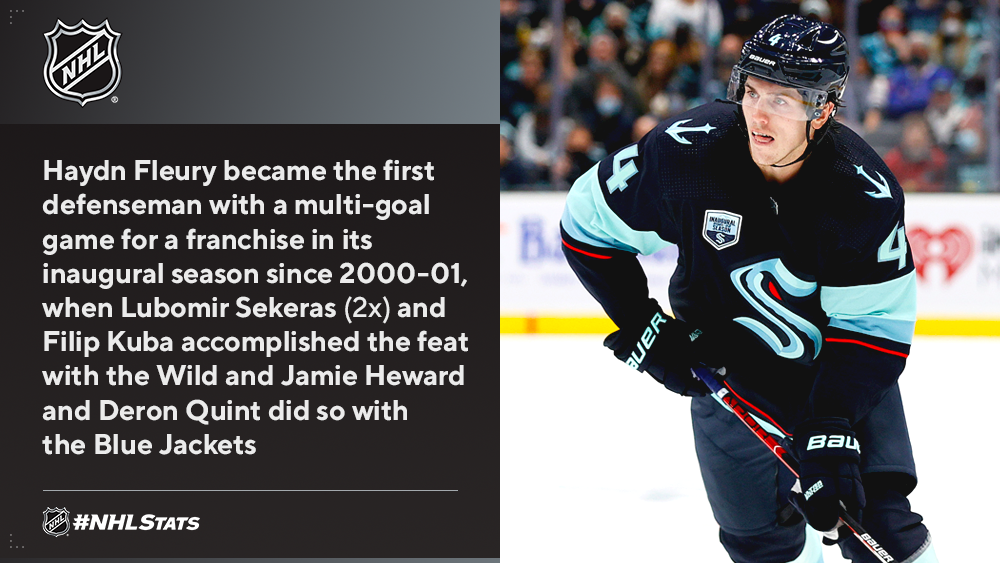 OVECHKIN, CAPITALS LOOK TO EXTEND SEASON-OPENING STREAKS FRIDAY
Alex Ovechkin (8-5—13 in 7 GP) and the Capitals (4-0-3, 11 points) will put their season-opening point streaks on the line during Friday’s six-game slate. 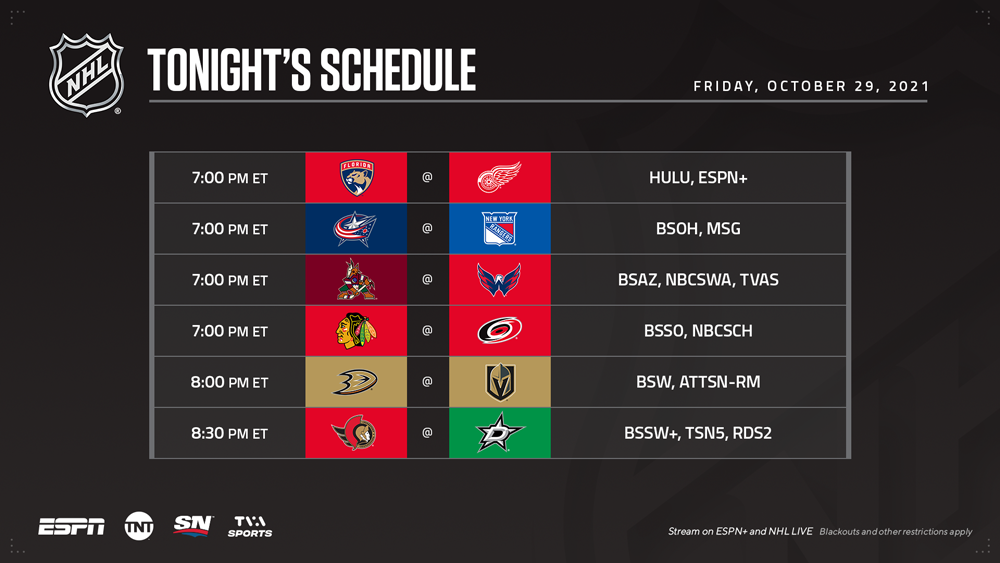 * With a multi-goal outing, Ovechkin can also match the fewest games of his career to reach the 10-goal mark in a season – he required eight contests in 2017-18 (10-1—11). No player in NHL history has ever scored 10 goals prior to their 10th game of a campaign at age 36 or older. 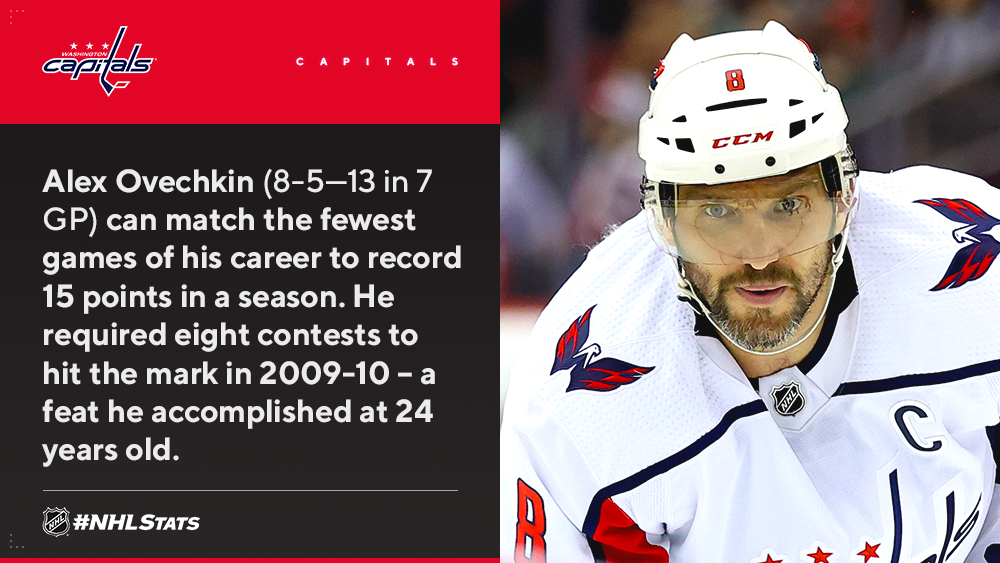