* Cam Atkinson scored his fifth and sixth goals in a Flyers uniform to help Philadelphia become the first team to defeat Edmonton in 2021-22.* The Red Wings and Maple Leafs became the sixth and seventh teams to erase a multi-goal deficit and win this season.

* The 5-0-0 Blues and Hurricanes eye another victory when they square off with the Avalanche and Bruins, respectively.

* McDavid became just the seventh different player in NHL history to record two or more points in each of his team’s first six games of a season. 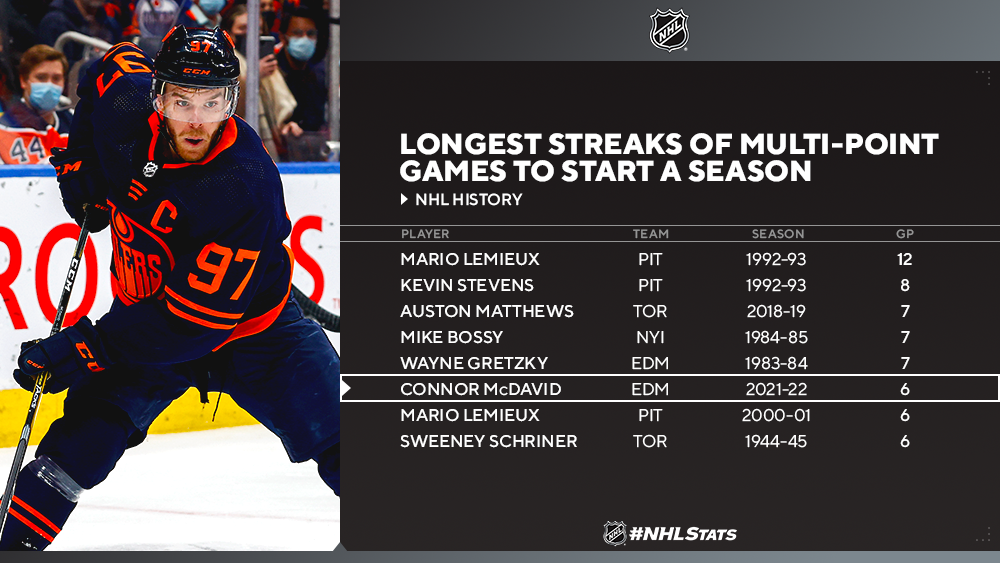 * Vegas has recorded 75 comeback wins since entering the NHL in 2017-18, behind only Tampa Bay (85) and Pittsburgh (76) for the most among all teams over that span.

* Detroit and Toronto became the sixth and seventh teams to overcome a multi-goal deficit to win in 2021-22. 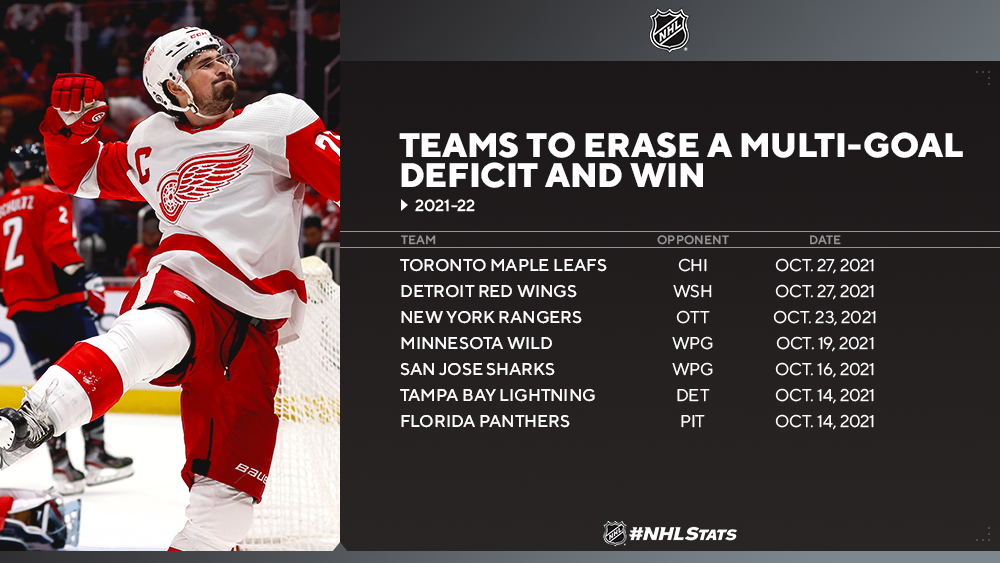 BLUES, HURRICANES EYE 6-0-0 STARTS; FLAMES LOOK TO SWEEP ROAD TRIP
After the Panthers extended a franchise record by improving to 7-0-0, the pursuit of perfection continues Thursday for the Blues (5-0-0, 10 points) and Hurricanes (5-0-0, 10 points). Calgary (4-1-1, 9 points), meanwhile, will aim to sweep its five-game road trip. 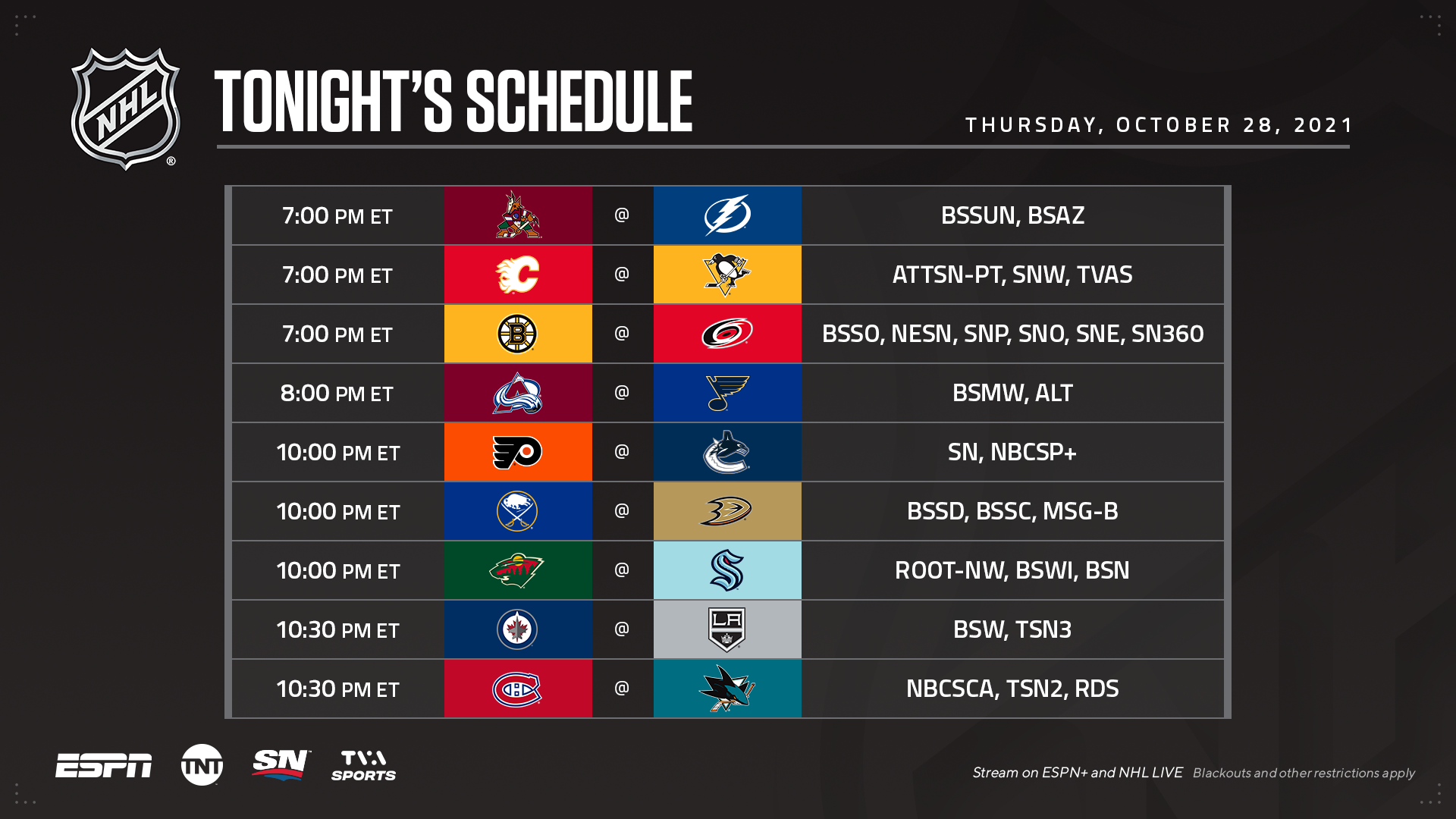 * The Hurricanes look to establish a franchise record for longest season-opening winning streak, surpassing the previous mark of five games from 2019-20. Andrei Svechnikov (5-4—9 in 5 GP) and Sebastian Aho (4-3—7 in 5 GP) can become the second set of Hurricanes/Whalers teammates to simultaneously open a campaign with at least one point in each of the club’s first six games, joining Ron Francis (6-8—14 in 11 GP) and Risto Siltanen (2-8—10 in 7 GP) in 1984-85 (w/ HFD).

* The Flames, who have not trailed through the first four games of their voyage, swept a road trip of five-plus contests once in franchise history (6-0-0 from Dec. 9-18, 2007). Elias Lindholm (7-1—8 in 6 GP) and Andrew Mangiapane (7-0—7 in 6 GP) share the team lead with seven goals apiece this season – the latter has found the back of the net in each of Calgary’s first five road games, which is tied for the longest such run in franchise history. 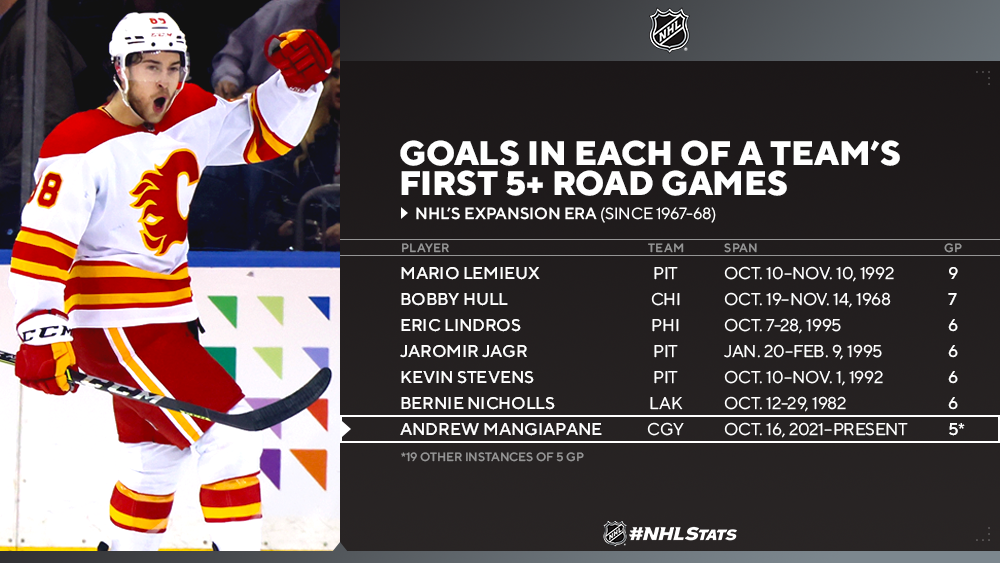