* T.J. Oshie and Drake Batherson each scored three goals in the same game to mark the season’s first duelling hat tricks, as the Capitals and Senators combined for 12 goals. * The NHL has four teams at 5-0-0 or better for the first time after the Panthers, Hurricanes and Blues all won Monday to keep pace with the idle Oilers as the only undefeated teams left in the League.

* The Canadiens make their return to Seattle – where they played in the 1919 Stanley Cup Final – as the Kraken look to win their first game at Climate Pledge Arena.

* Alex Ovechkin recorded the 151st multi-goal game of his NHL career – and second this season – to move within four goals of tying Brett Hull (741) for fourth place in NHL history. 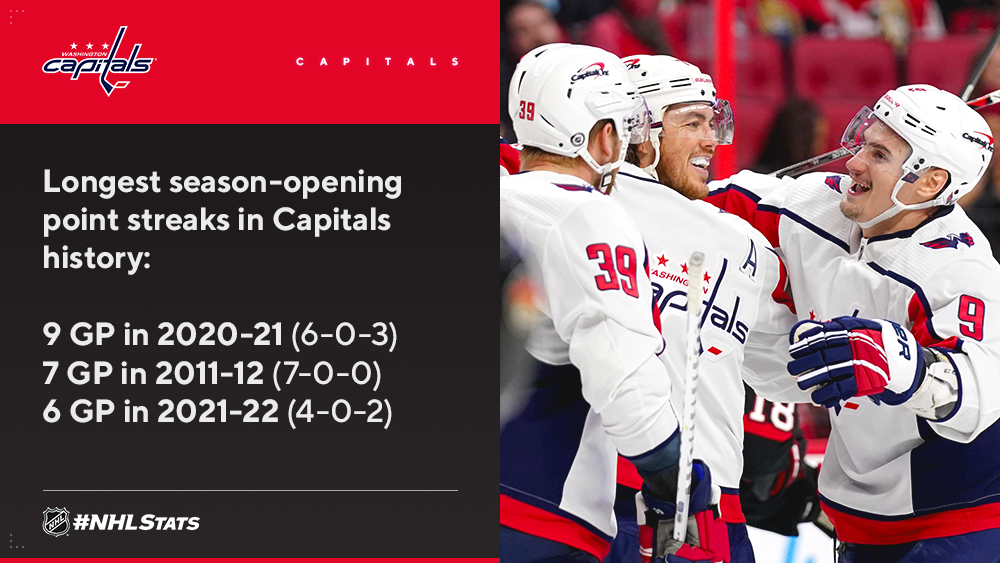 * Facing his former team for the first time, Frederik Andersen became the first goaltender in Hurricanes/Whalers history to win each of his first five games with the club and also the first Carolina netminder to begin a season with a five-game winning streak.

* Florida’s Spencer Knight secured his sixth win in his sixth career regular-season appearance dating to 2020-21, trailing only three netminders on the list of longest winning streaks to start an NHL career. 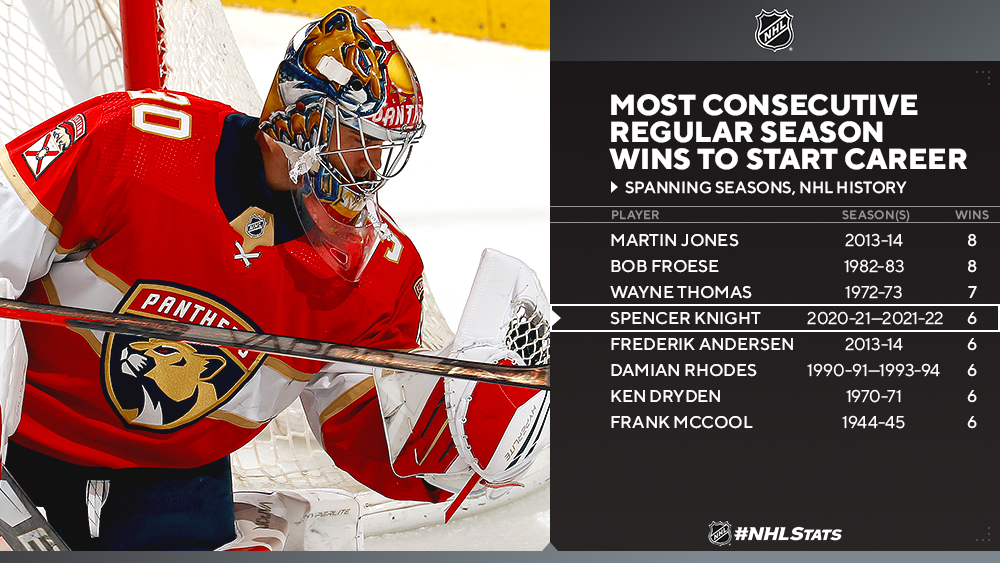 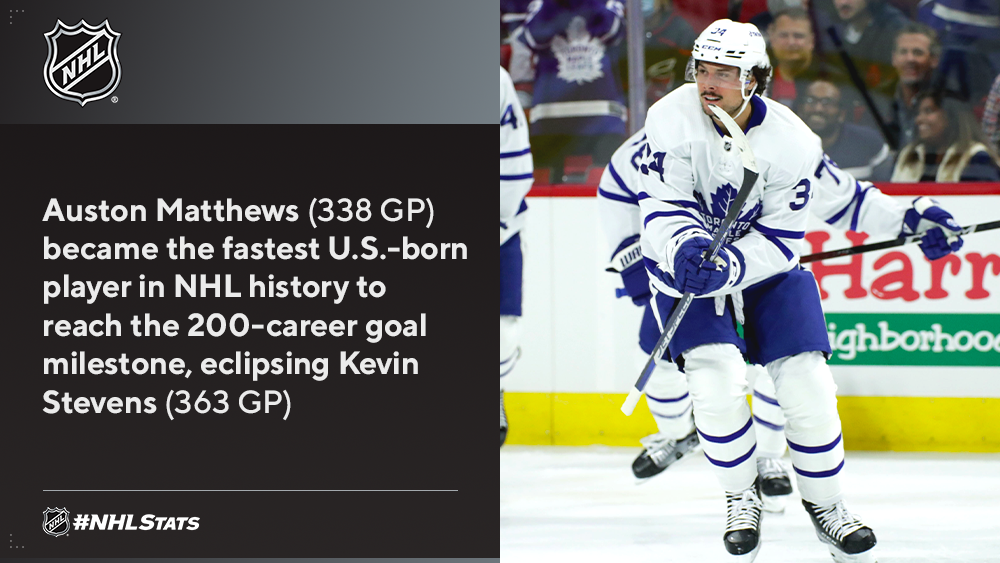 THE BEST OF A BUSY MONDAY FROM #NHLSTATS: LIVE UPDATES

Johnny Gaudreau collected his seventh assist of 2021-22, the most by a Flames player through the first five games of a season since 1994-95 – all part of a jam-packed, seven-game Monday in the NHL. In case you missed it, here is a roundup of more #NHLStats from across the League:

* Florida’s Joe Thornton (42 years, 115 days) became the second-oldest player in Panthers history to score a regular-season goal, behind only Jaromir Jagr who tallied the last of his 49 goals with the club at age 45 years, 45 days on April 1, 2014. 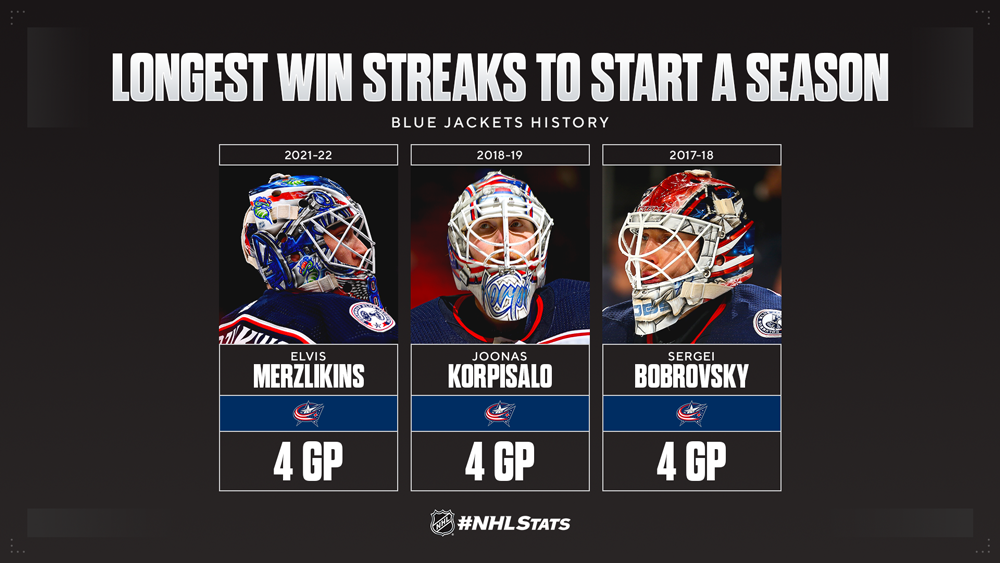 SHOWDOWN IN SEATTLE: NEWEST FRANCHISE VS. MOST DECORATED FRANCHISE

The Kraken and Canadiens will go head-to-head Tuesday as the NHL’s 32nd franchise looks to capture its first-ever home win in a contest against one of the League’s founding clubs. 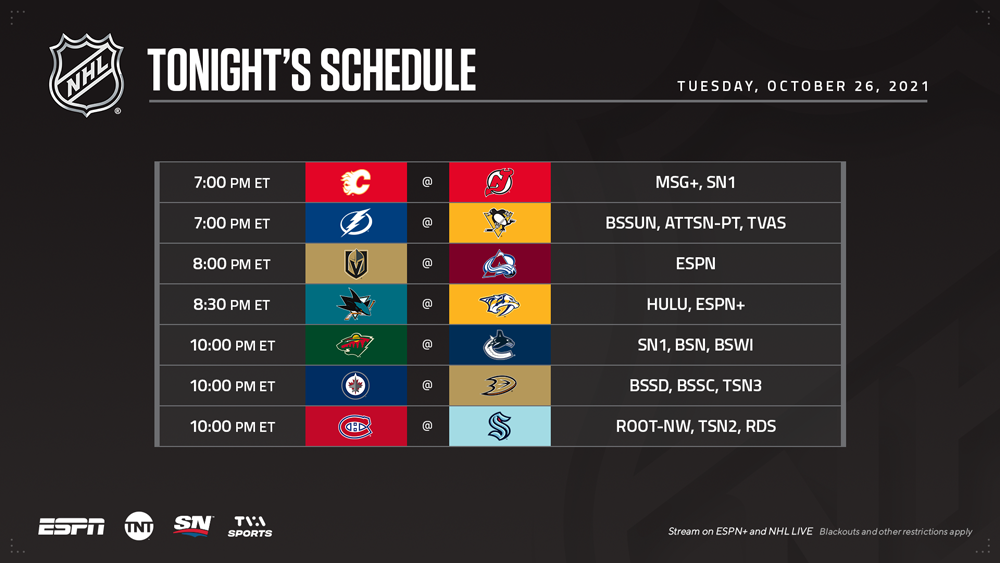 * Facing a Seattle-based team for the first time since Game 5 of the 1919 Stanley Cup Final against the Seattle Metropolitans, Montreal will become the NHL’s first club to play against 38 franchises (including active and defunct). Toronto will also achieve the feat on Dec. 19.

* After contesting three one-goal decisions in their first five games, the Kraken can become the ninth expansion team to defeat an Original Six franchise for its first-ever home victory (since 1967-68). Two of the last three instances have come against the Canadiens. 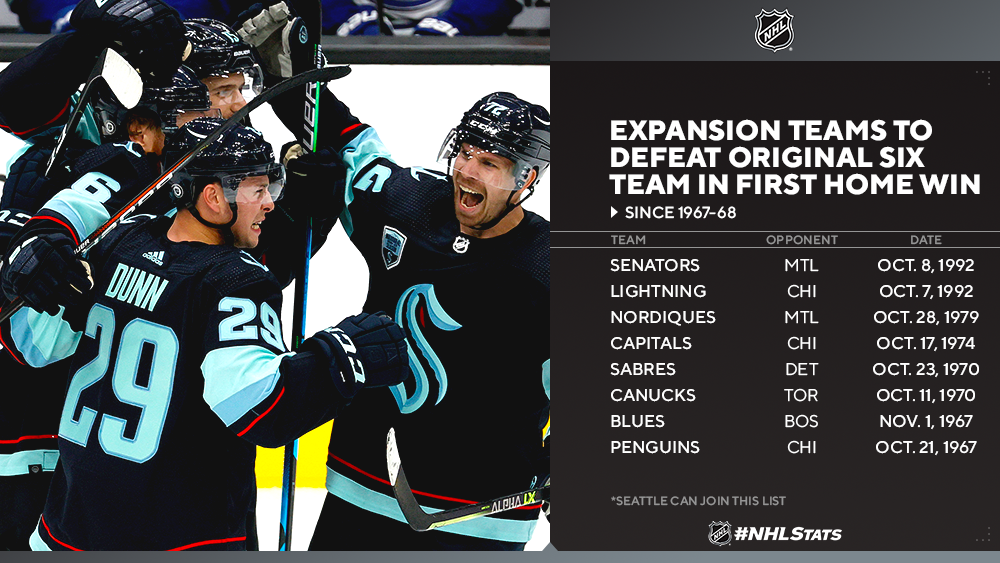 RECENT STRINGS OF SUCCESS ALSO TAKE TO THE ICE TUESDAY
Multiple stretches of success to start the season will look to continue once the puck drops for the seven-game slate Tuesday night:

* Sharks teammates Logan Couture and Timo Meier have each collected 3-5—8 through San Jose’s first five games to start the season and have found the score sheet in every contest. While 10 games stands as the longest season-opening point streak in franchise history, only two Sharks campaigns have started with multiple players registering simultaneous stretches of at least six contests.

* Fresh off earning NHL’s “First Star” for the week ending Oct. 24, Jets forward Kyle Connor takes to the ice against the Ducks with multiple points in each of his last three contests (5-3—8 in 3 GP). The longest stretch of multi-point games in Jets team history is five, seen on four occasions. 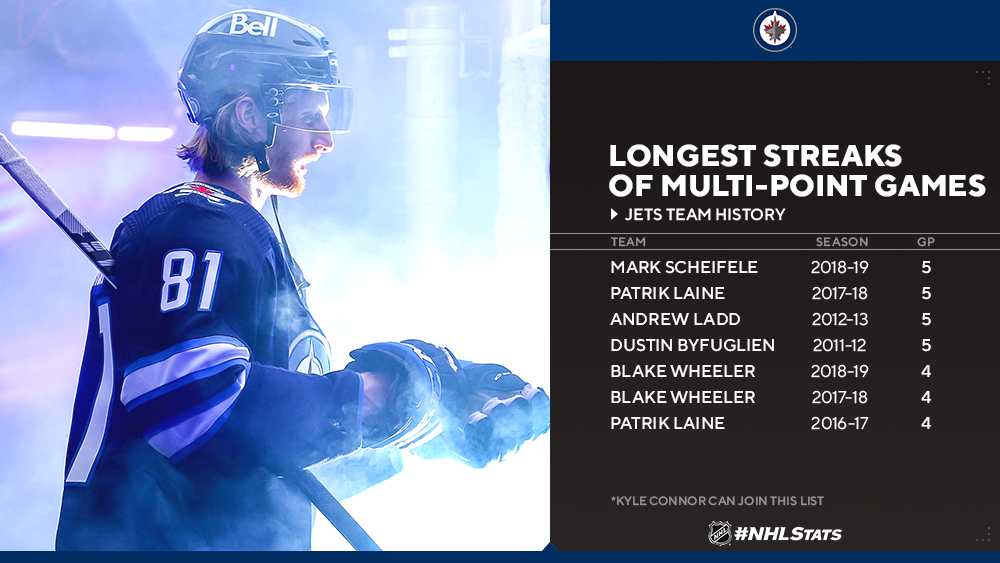