* ESPN opened its first NHL broadcast in 17 years with a tribute to the iconic ESPN NHL theme song.* Opening night saw the Penguins knock off the Lightning after Tampa Bay raised its third Stanley Cup banner, while the Golden Knights topped the Kraken in a battle between the NHL’s two newest franchises.

* The second day of the 2021-22 season opens with the return of the oldest rivalry in League history as well as a doubleheader on TNT – their first-ever NHL regular-season broadcast.

GOLDEN KNIGHTS OUTLAST KRAKEN IN ROLLERCOASTER OPENER
After Max Pacioretty (2-1—3) helped Vegas storm out to a 3-0 lead, Morgan Geekie scored the last of three straight Seattle goals to help the Kraken draw even in the third period – only to have the Golden Knights reclaim the lead once and for all 35 seconds later. 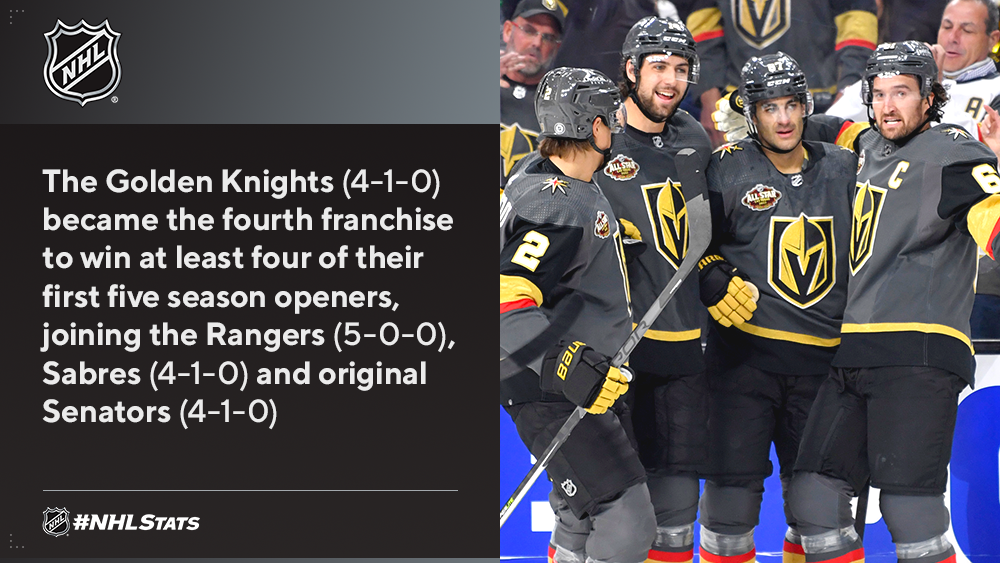 * Pacioretty recorded his eighth game with three-plus points dating to the start of the 2020-21 season, trailing only reigning Hart Trophy winner Connor McDavid (18) for the most among all players over that span.

* From the very first faceoff to Ryan Donato’s goal, the Kraken made a splash in their NHL debut. Below is a timeline of some franchise firsts from Seattle’s inaugural contest: 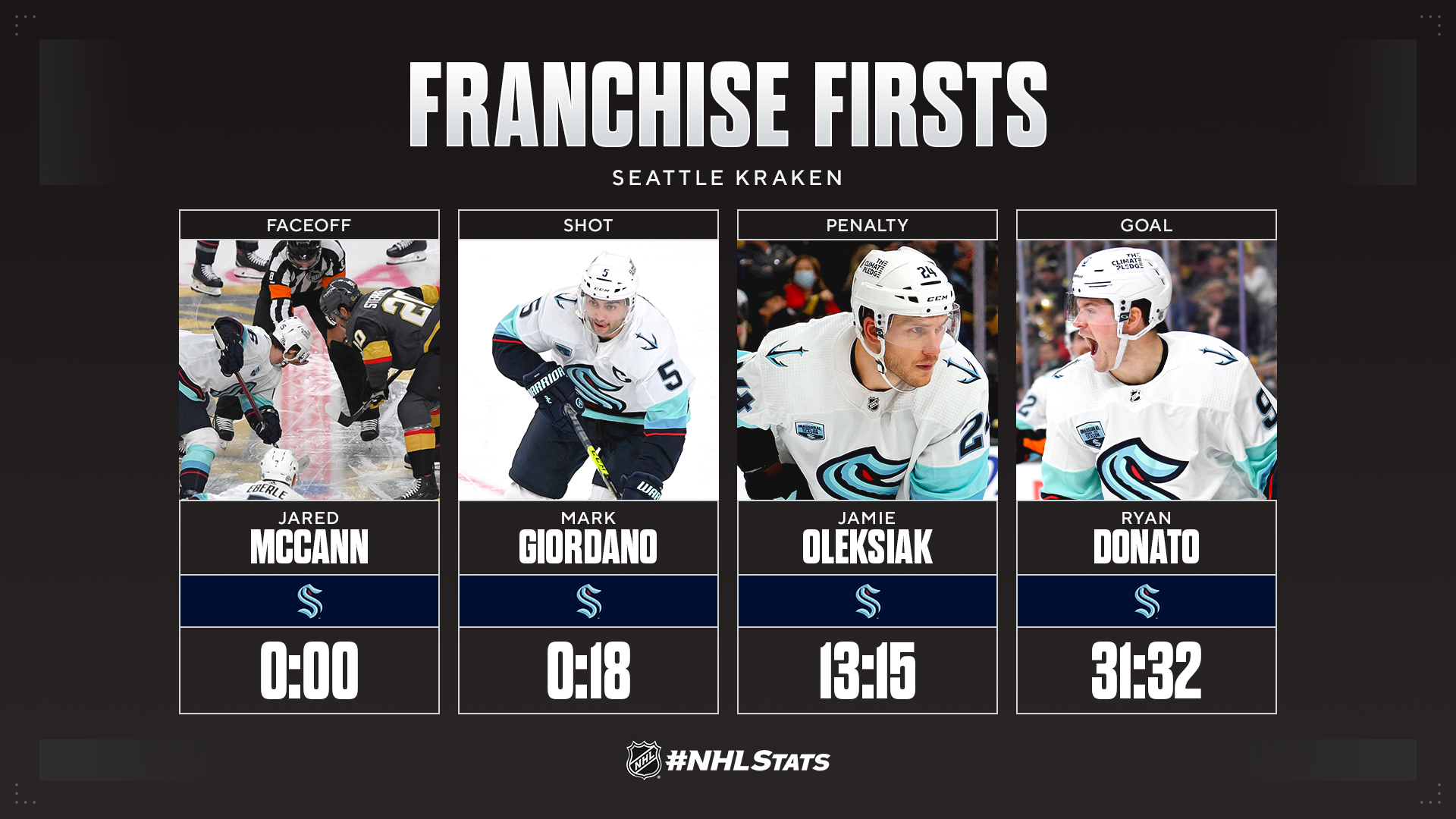 * Brian Boyle, who remained unsigned through the entirety of the 2020-21 season and last skated in an NHL game during Game 4 of the 2020 Stanley Cup Qualifiers (w/ FLA), scored in his Penguins debut just hours after inking a one-year contract. 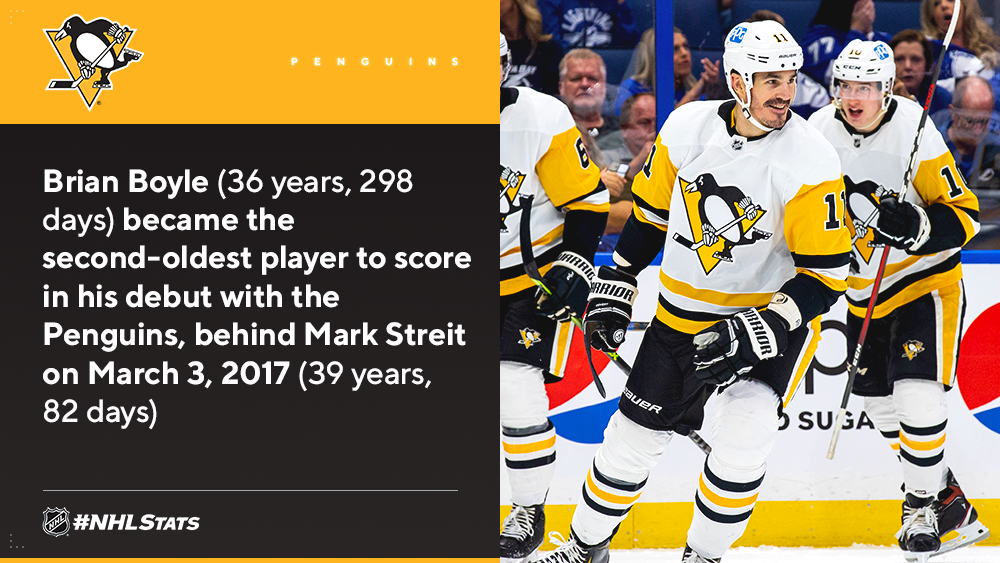 MORE FROM OPENING NIGHT AT #NHLSTATS: LIVE UPDATES
Live Updates has returned, but this time throughout the entirety of the 2021-22 regular season with up-to-the-minute information readily available during games every day of the season. Find the link to the blog prior to each day’s games at @PR_NHL (Twitter and Instagram Story). 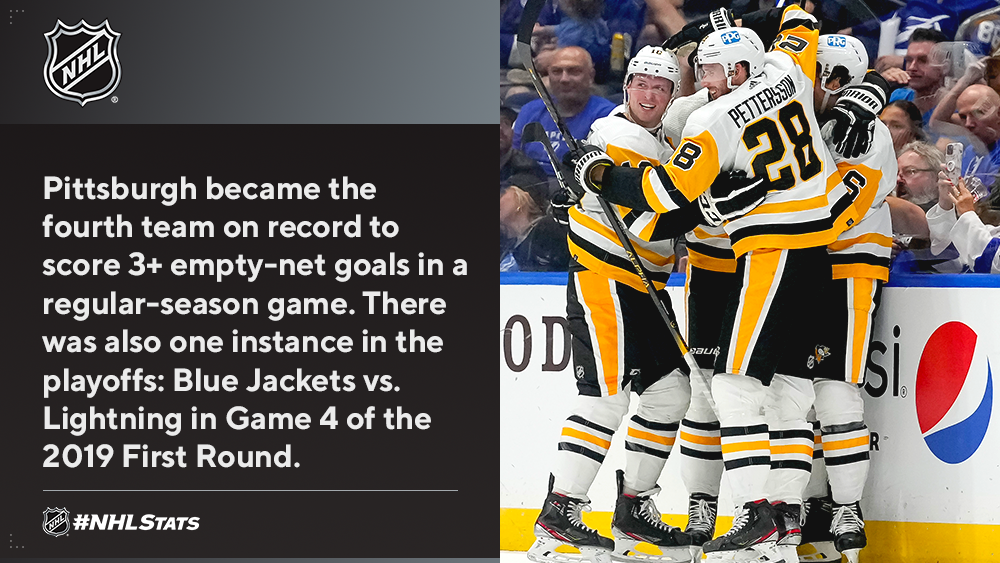 TNT, SPORTSNET DOUBLEHEADERS HIGHLIGHT SECOND DAY OF SEASON
The second day of the 2021-22 NHL season features a doubleheader on TNT and Sportsnet, while the Ducks host the Jets on Sportsnet 360. 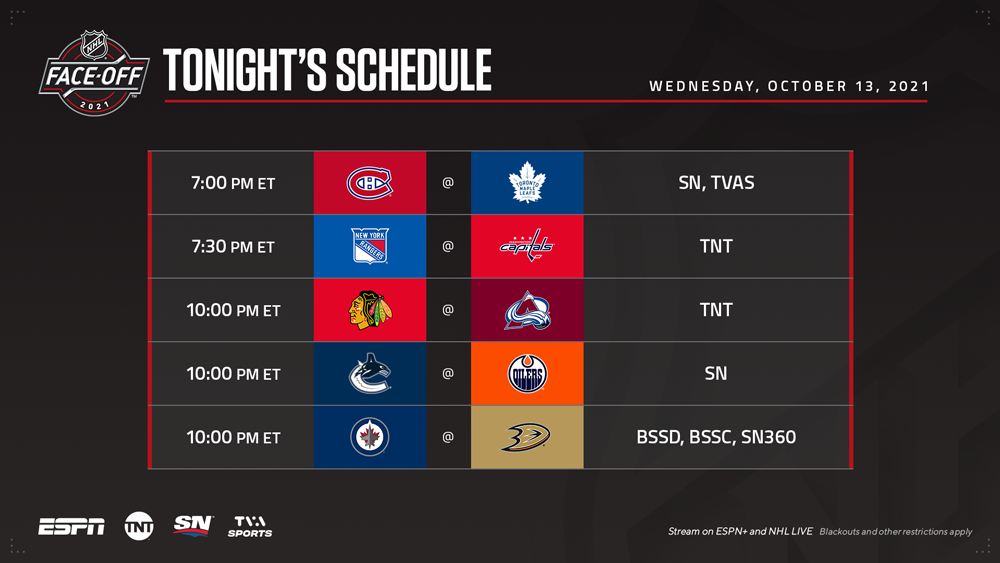 * There will be plenty of stars on display as TNT makes its debut regular-season broadcast, including reigning Norris Trophy winner Adam Fox and the Rangers visiting another decorated defenseman, John Carlson of the Capitals. Fox led all defensemen in assists and ranked second in points last season (5-42—47 in 55 GP), while Carlson has more points than any other blueliner over the past four seasons.

* The TNT broadcast will then shift to Colorado, where the Avalanche are backstopped by new goaltender Darcy Kuemper and will hope to build off a successful 2020-21 season that saw them capture the franchise’s third Presidents’ Trophy. Colorado will face Chicago, which welcome notable offseason additions Seth Jones and Marc-Andre Fleury – who sits eight wins shy of 500 – and will also be buoyed by the return of captain Jonathan Toews.

* Sportsnet opens with a rematch of the 2021 First Round, which featured the Canadiens overcoming a 3-1 series deficit to rally past the top-seeded Maple Leafs in seven games. Toronto and Montreal are going head-to-head in a mutual season-opening game for the 19th time in the history of their rivalry – the most among two opponents in NHL history.

* Later at Rogers Place, Leon Draisaitl and the Oilers will clash with Elias Pettersson and the Canucks in a mutual season-opening game for the third time in as many years (VAN: 1-1-0; EDM: 1-1-0). Draisaitl has recorded a point in each of his team’s last five season-opening games dating to 2016-17 (2-7—9 in 5 GP). 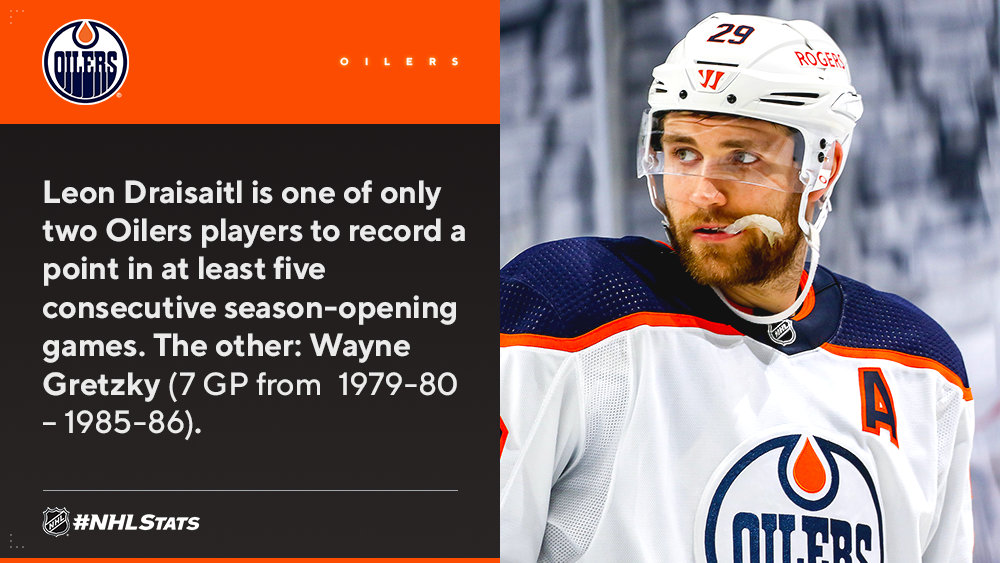