* On the night Connor McDavid scored a highlight-reel goal to help Edmonton draw even, he joined elite company by posting his sixth point streak of 10-plus games prior to his 25th birthday. * Leon Draisaitl scored the winner in overtime and recorded his sixth outing with three-plus points in 2021-22. Only two players in NHL history have registered more through their first 10 games of a season.

* The Hurricanes and Panthers are set to contest the first meeting in NHL history between clubs with active season-opening point streaks of nine or more games.

McDAVID, DRAISAITL SHINE IN HIGH-SCORING BOUT WITH RANGERS
After Connor McDavid (1-2—3) skated through four Rangers players en route to tying the game, Leon Draisaitl (1-2—3) netted the winner in overtime to help the Oilers become the second team to erase a three-goal deficit to win this season, joining the Lightning (Oct. 14 at DET). 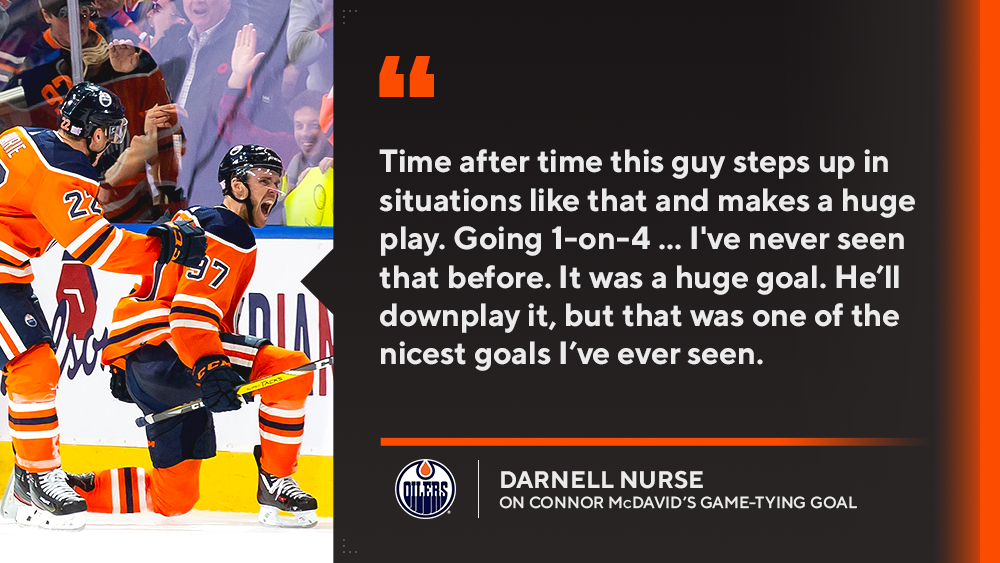 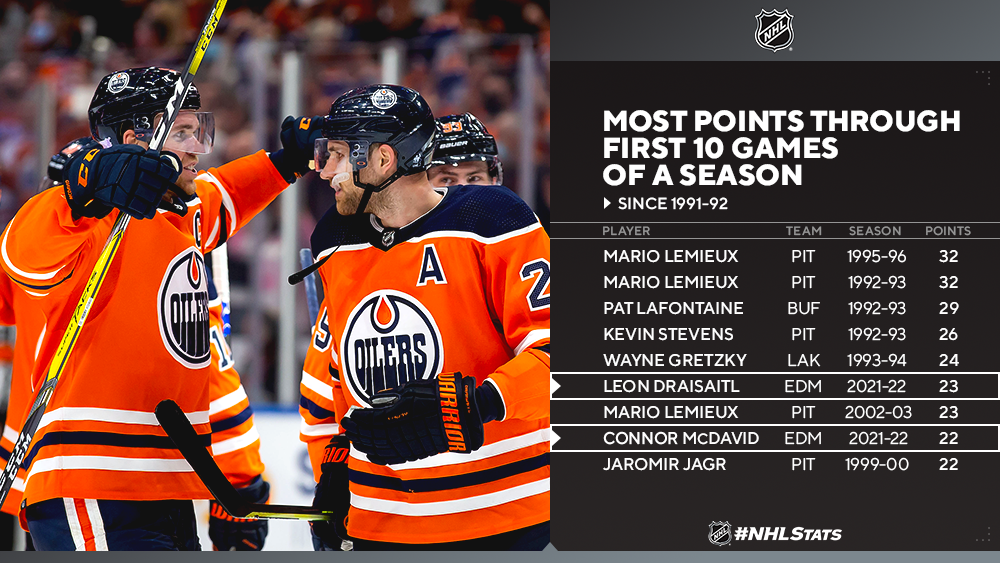 PREDATORS EDGE CANUCKS AS ROGERS ARENA CELEBRATES DIWALI
Matt Duchene (1-0—1) scored for the third straight game as the Predators defeated the Canucks on the night Vancouver donned special jerseys in warmup as part of its Diwali celebration – which caught the eye of actor Seth Rogen. 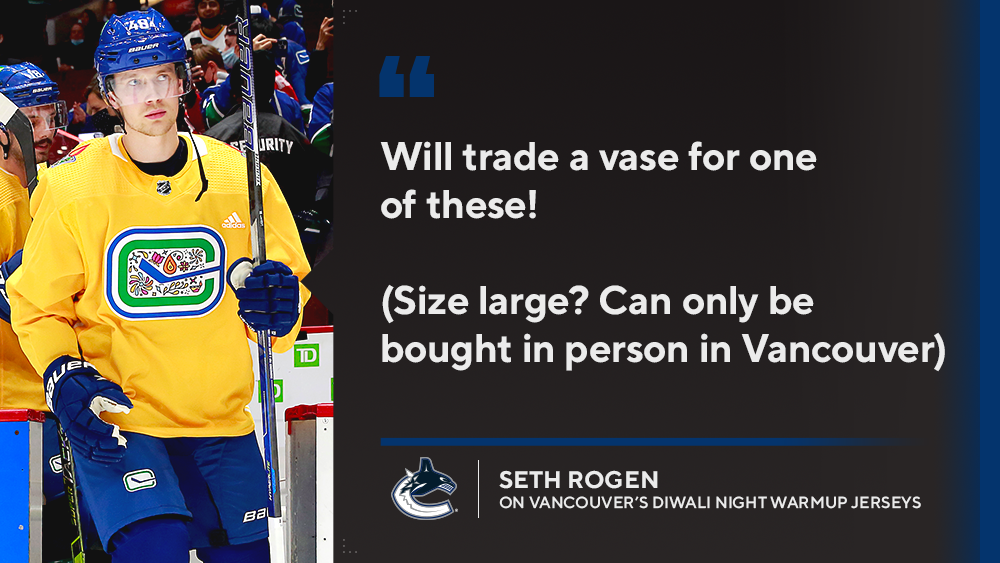 CONNOR PILOTS JETS TO ANOTHER VICTORY IN #NHLSTATS: LIVE UPDATES
The Friday edition of #NHLStats: Live Updates featured Kyle Connor boosting his 2021-22 totals to 8-8—16 (10 GP) – the second-highest point total in franchise history through 10 games of a season. The Jets improved to 6-0-2 dating to Oct. 19 and sit one game shy of the longest point streak in franchise history.

* This will be the first meeting in NHL history between clubs with active season-opening point streaks of nine or more games. The closest such instance previously was in 1972-73 when Montreal (6-0-3) and Buffalo (5-0-3) met in a contest that saw them each extend their streak (3-3 tie). 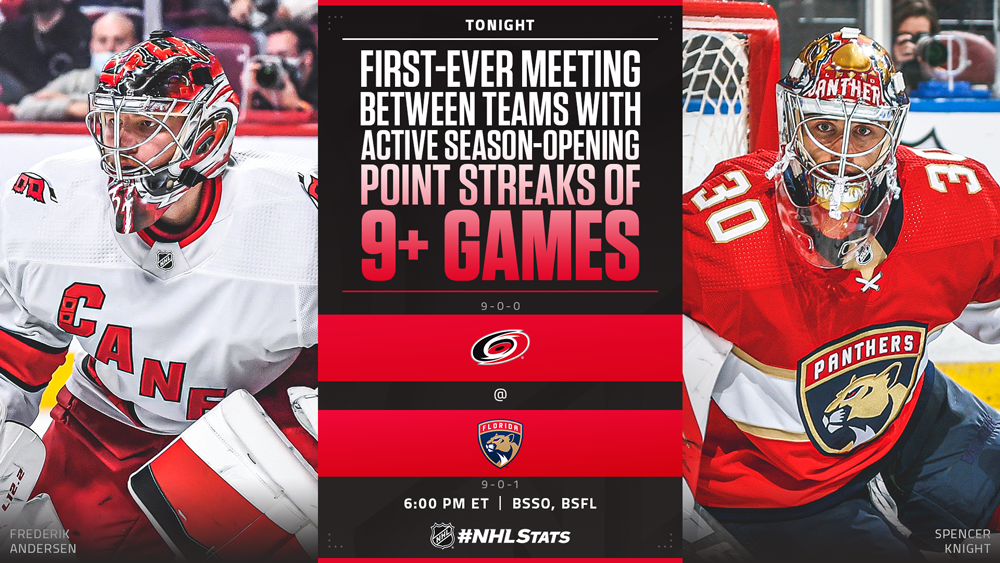 BRUINS, MAPLE LEAFS RIVALRY SET TO REIGNITE ON HOCKEY NIGHT IN CANADA
The Bruins and Maple Leafs will reunite for the first time in 722 days when the Original Six rivals face off on Hockey Night in Canada. The Maple Leafs enter on a four-game win streak led by Mitchell Marner, who has 2-5—7 over that span after starting the season with one point through the club’s first seven contests (0-1—1).

* Patrice Bergeron, who is coming off his second career four-goal outing Thursday, leads all Bruins with 24-40—64 (69 GP) against the Maple Leafs – which stands as his highest point total against any opponent. 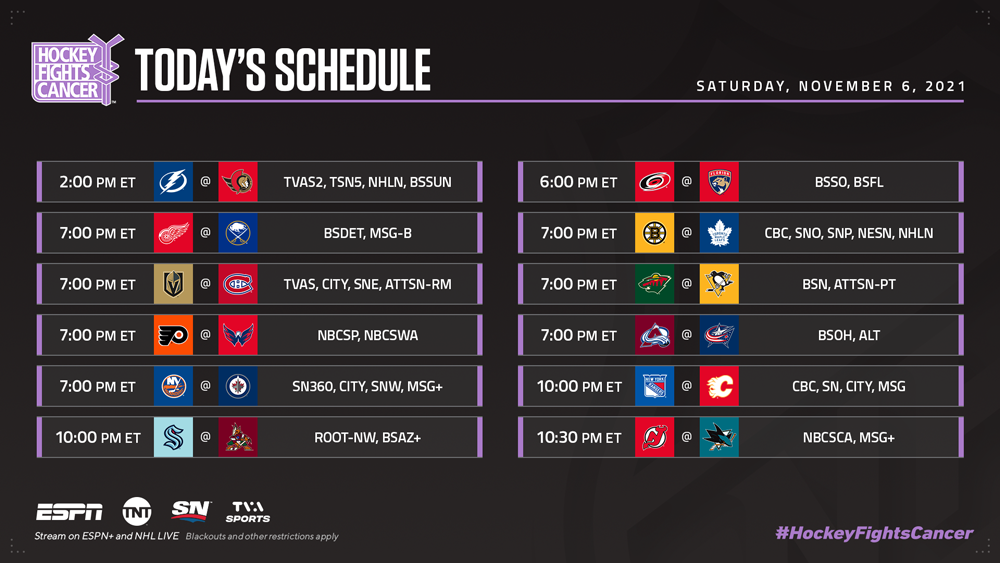