* Mitchell Marner and Jason Robertson each found the back of the net to extend their point streaks, both securing the second-longest run in their respective franchise’s history in the process.

* The Islanders and Kraken will both aim to extend win streaks Tuesday, with Seattle looking to establish a franchise benchmark with its sixth consecutive victory.

GOALTENDERS BACK DEVILS, GOLDEN KNIGHTS TO NHL-LEADING 10TH ROAD WIN
Vitek Vanecek (35 saves) and Logan Thompson (26 saves) each stood their ground and backstopped the Devils (19-4-0, 38 points) and Golden Knights (17-6-1, 35 points) to their 10th road win of the season, with New Jersey capturing two points in each of their past 10 contests as the visitor. 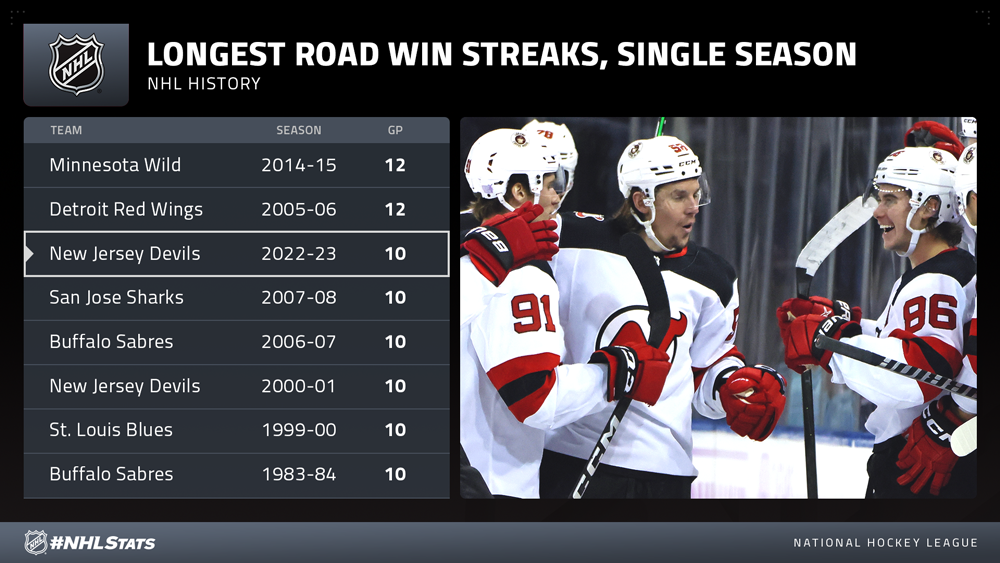 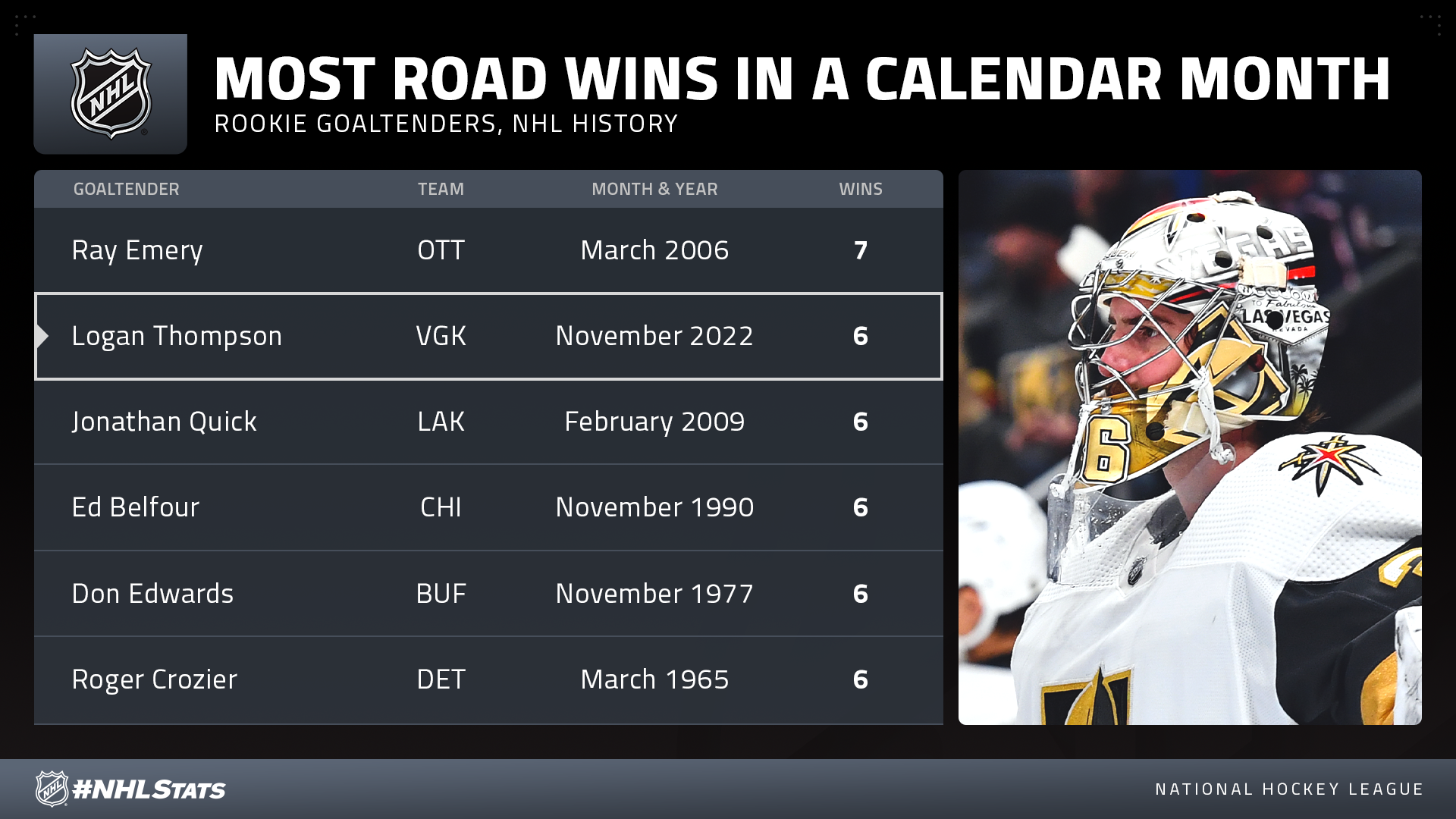 DID YOU KNOW?
While USA soccer fans get set to cheer on their team during its 2022 World Cup game Tuesday, the Hughes family has a connection of their own to international soccer events – Jack’s mom, Ellen, was a sideline reporter for ESPN at the 1999 Women’s World Cup of soccer during a time when she was on air with the Big Ten network soccer package. Ellen was also a successful tri-sport athlete at the University of New Hampshire, playing hockey, soccer and lacrosse, and was a member of the U.S. Women’s National Hockey Team while also representing her country at the 1992 World Hockey Championships.

* Marner (1-0—1) scored the winning goal to move within one game of the longest point streak in Maple Leafs history, behind Darryl Sittler (18 GP in 1977-78) and Eddie Olczyk (18 GP in 1989-90). Marner is also the 12th different skater with a game-winning tally for Toronto this season, tied with Boston and New Jersey for the most among all teams. 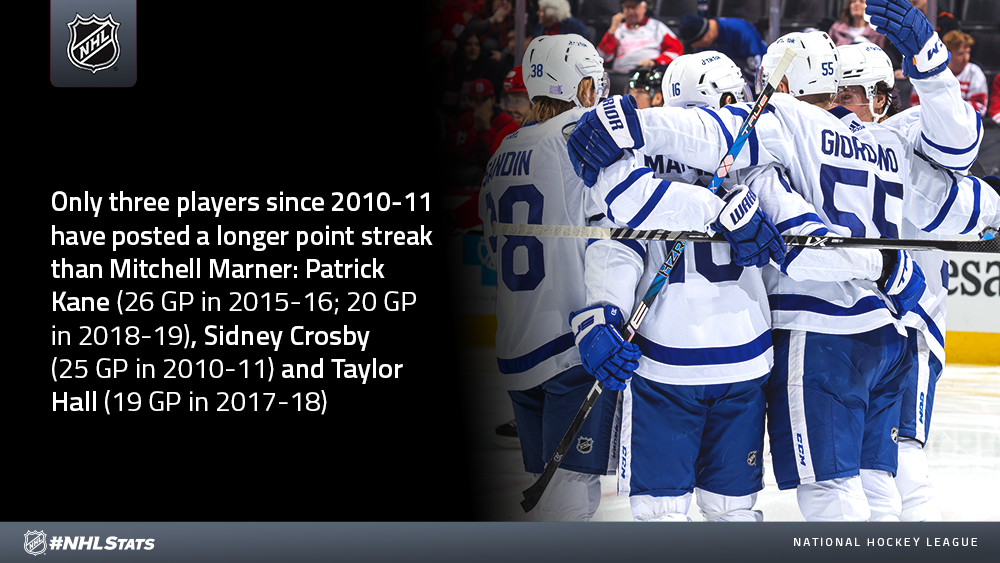 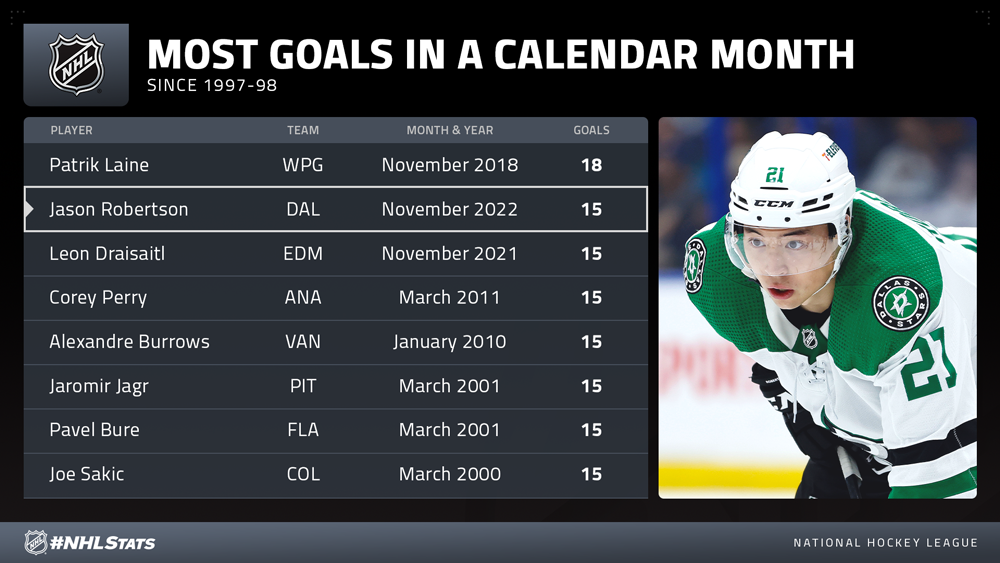 STAMKOS CLOSES IN ON 1,000-POINT MILESTONE WITH OVERTIME WINNER
After both the Sabres and Lightning rallied from two-goal deficits to force overtime, it was Steven Stamkos (2-1—3) who netted the game winner to help Tampa Bay (13-7-1, 27 points) earn its first multi-goal comeback victory of 2022-23. 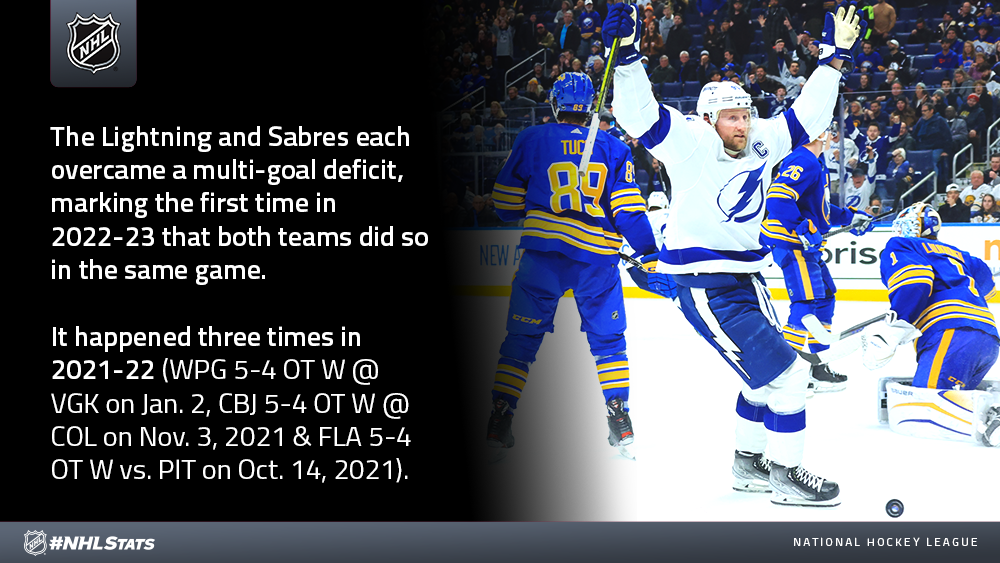 * Nikita Kucherov (0-3—3) recorded his NHL-leading third three-assist game of the season, with each of those performances coming within his past four contests. Kucherov is the franchise leader in three-assist outings (28 GP) and has recorded the second-most instances among all players since his NHL debut in 2013-14, trailing only Connor McDavid (33 GP).

BOUCHARD’S LATE GOAL FEATURED IN #NHLSTATS: LIVE UPDATES
The Monday edition of #NHLStats: Live Updates featured a back-and-forth contest between the Oilers and Panthers that saw Evan Bouchard score the game-tying goal in the final five seconds of regulation before Connor McDavid (1-2—3) capped off his three-point performance with an assist on Leon Draisaitl’s overtime winner. 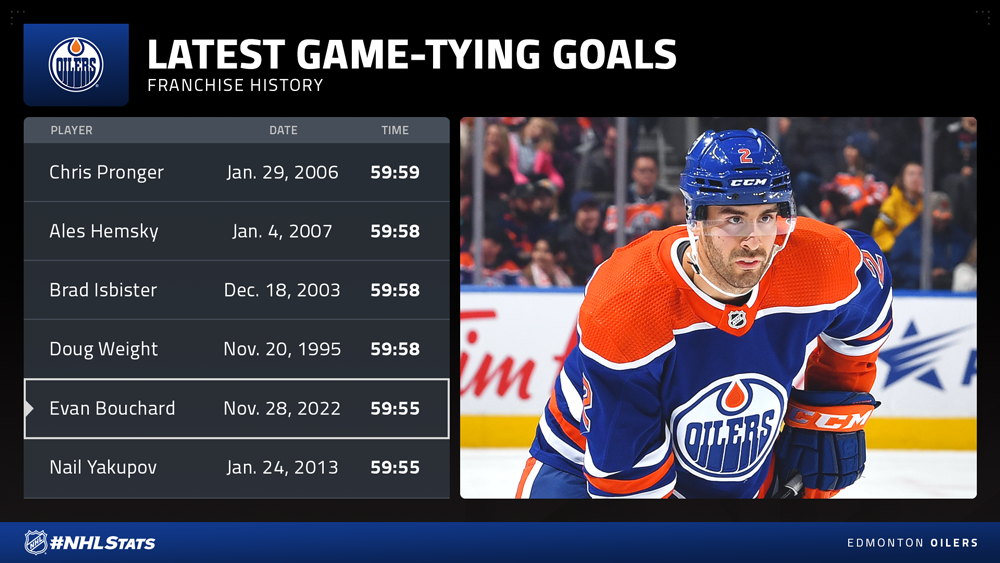 WINNING STREAKS AND HOMECOMINGS HIGHLIGHTED IN A NINE-GAME SLATE TUESDAY
The Islanders (10-4-0) and Kraken (9-1-1), two of the top five winningest teams in the month of November, will both look to extend their four- and five-game win streaks, respectively, while Matthew Tkachuk makes his return to Calgary – the city he spent his first six seasons with – for the first time since being traded to Florida in the offseason. 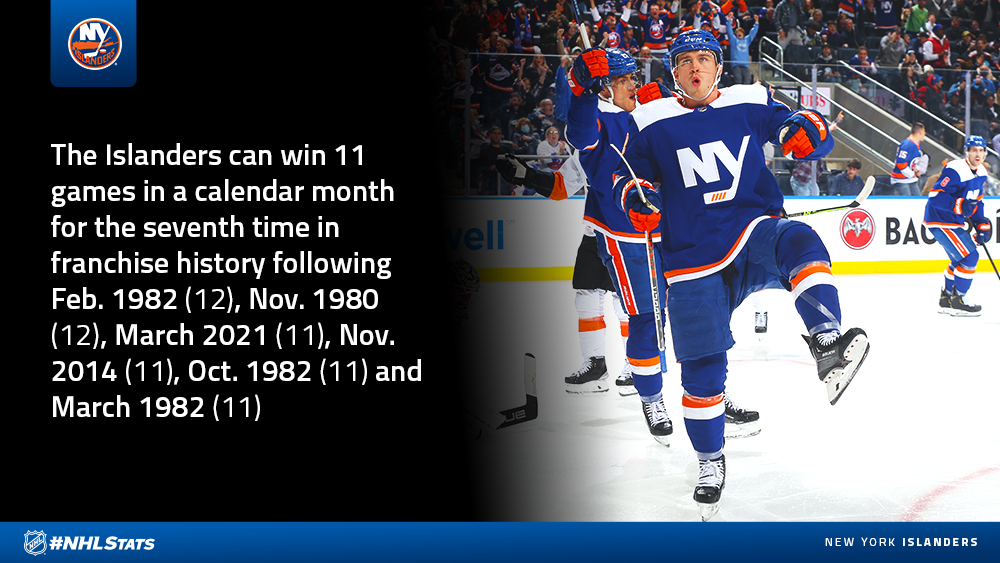 * Tkachuk, who was selected by the Flames in the first round of the 2016 NHL Draft (No. 6 overall), will make his return to Calgary for the first time since the Panthers acquired him in the offseason in a blockbuster trade with Jonathan Huberdeau, who already made his emotional return to South Florida. Tkachuk ranked second in goals (152), assists (230) and points (382) over his tenure with the Flames from 2016-17 to 2021-22 and departed after a career-best season which saw him post 42-62—104. Tkachuk will aim to post multi-point outings in each of his first two games against his former club, after recording 1-1— 2 on Nov. 19.