* Cale Makar became the first defenseman in franchise history to record multiple goals in consecutive games as the Avalanche prevailed in a contest which featured a total of 12 tallies.

* The top two teams in the Pacific Division and Western Conference will jockey for positioning as the Flames (11-3-5, 27 points)  and Oilers (13-4-0, 26 points) both are in action Tuesday.

MAKAR SCORES TWICE IN 12-GOAL GAME BETWEEN AVALANCHE, SENATORS
Cale Makar (2-0—2) recorded multiple goals in his second straight outing and Nazem Kadri (1-3—4) extended his point streak to nine games as Colorado prevailed in a contest which featured a combined 12 tallies. The Avalanche (9-5-1, 19 points) have won each of their past five games, outscoring their opponents 31-13 in the process. It marked the first time since December 1995 the franchise has eclipsed the 30-goal mark over a five-game span.

* Makar became the first defenseman in franchise history to record multiple goals in consecutive games and has multiple points in three straight contests, which trails only Jeff Brown (4 GP in 1988-89) for the longest such run by a defenseman in Avalanche/Nordiques history. 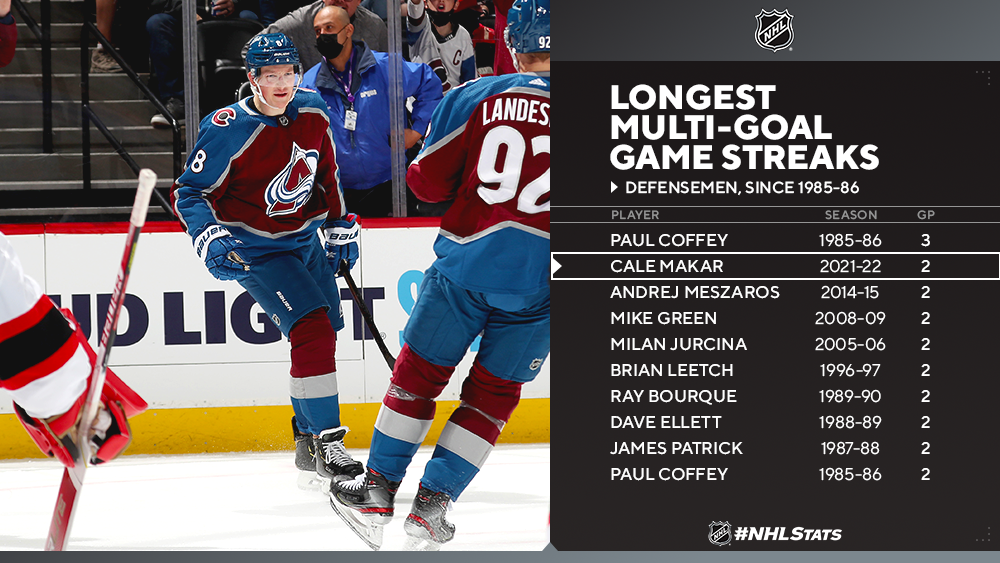 * Dominic Elliott, a seven-year-old Blues fan who is currently undergoing chemotherapy treatments for leukemia, announced the starting lineups prior to the game after being surprised by his favorite hockey player, O’Reilly, via a Zoom call last week. 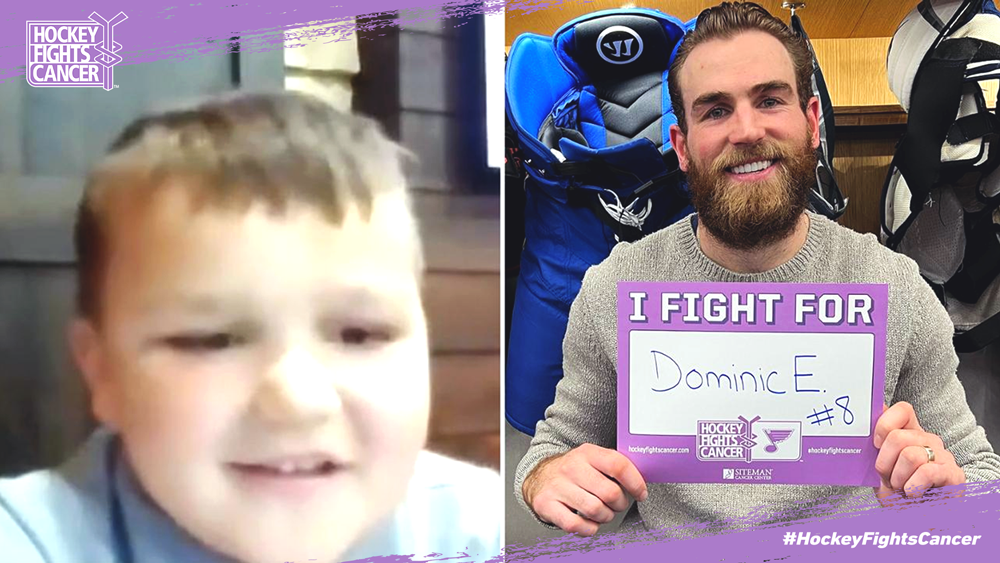 BJORKSTRAND, DOMI COMBINE FOR TWO QUICK GOALS ON #NHLSTATS: LIVE UPDATES
Oliver Bjorkstrand (1-0—1) and Max Domi (1-2—3) helped Columbus establish a franchise record after they each scored in the opening 55 seconds of the second period Monday – one of a number of #NHLStats on the most-recent edition of Live Updates. 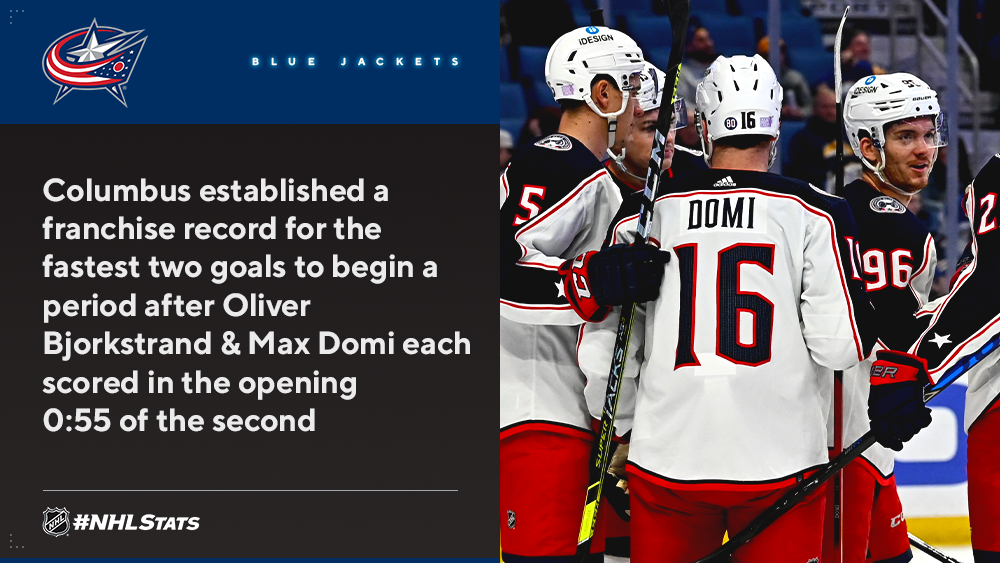 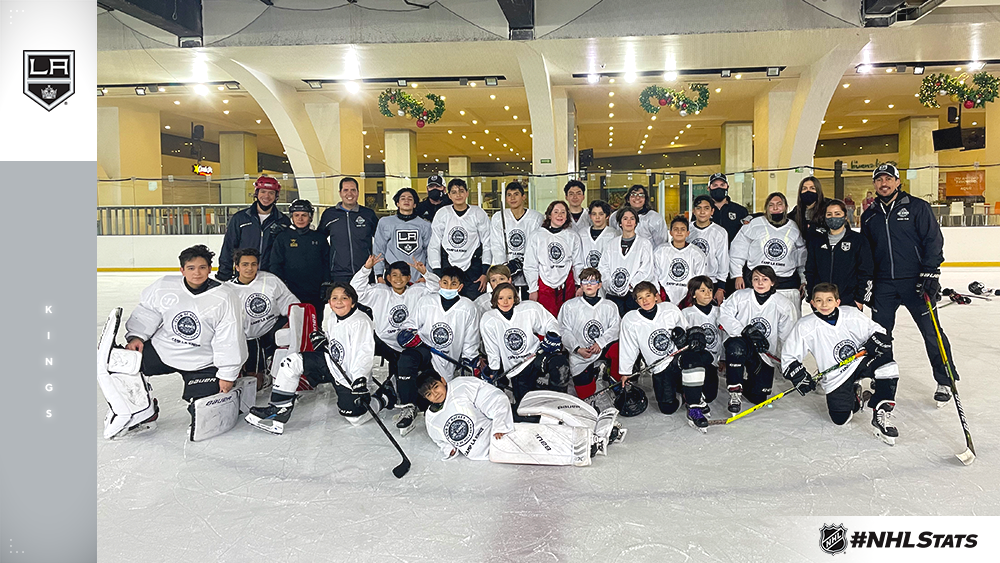 The top two teams in the Pacific Division and Western Conference will jockey for positioning Tuesday when the Flames (11-3-5, 27 points) and Oilers (13-4-0, 26 points) hit the ice. The 2021-22 campaign marks the first since 1989-90 that the Alberta rivals hold the top two spots (regardless of order) in their conference after each playing at least 17 games. 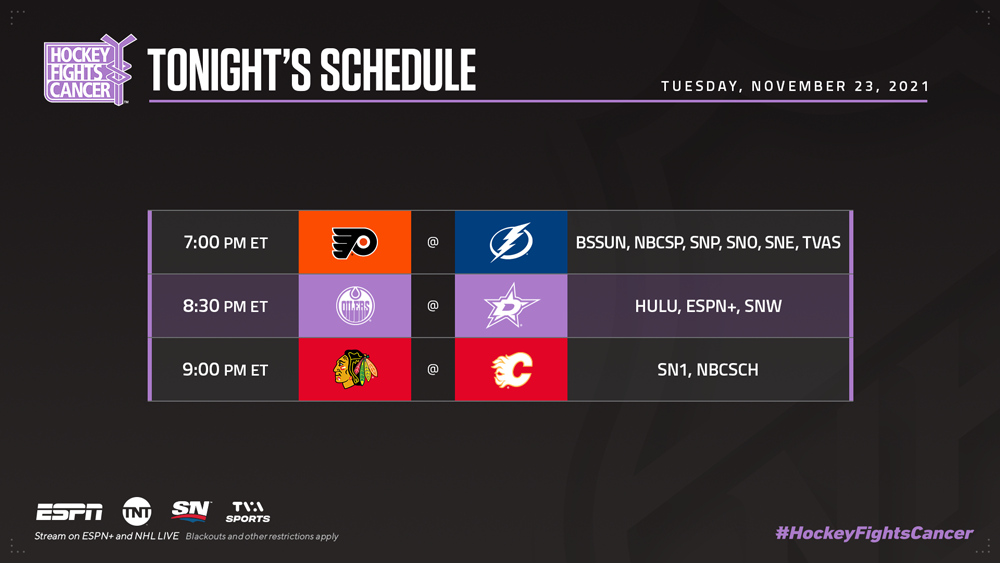 * The Oilers embark on a three-game road trip with Connor McDavid looking to become the sixth different player in NHL history – and second in his lifetime – to record a point in each of his team’s first 18 outings of a season. Additionally, an assist Tuesday would make McDavid (207-399—606 in 424 GP) the fourth-fastest player in League history to 400 assists.