* Connor McDavid found the score sheet to extend his season-opening point streak to 16 games, doing so again in highlight-reel fashion.* Andrew Mangiapane is producing at a goal-per-game pace on the road for the Flames this season and helped propel Calgary to victory in a high-scoring affair Thursday.

McDAVID LIFTS OILERS TO VICTORY WITH ANOTHER HIGHLIGHT-REEL GOAL. . .
Thirteen days after he went 1-on-4 to beat Alexandar Georgiev and the Rangers, Connor McDavid took on three Jets defenders Thursday to once again thrill the fans at Rogers Place and extend his season-opening point streak to 16 games.

* Andrew Mangiapane scored two of Calgary’s five goals while Jacob Markstrom turned aside all 27 shots he faced to record his NHL-leading fifth shutout of the season. Calgary has scored at least five goals in three of its 11 road games this season, which trails only Edmonton (4) for the most such outings in 2021-22. 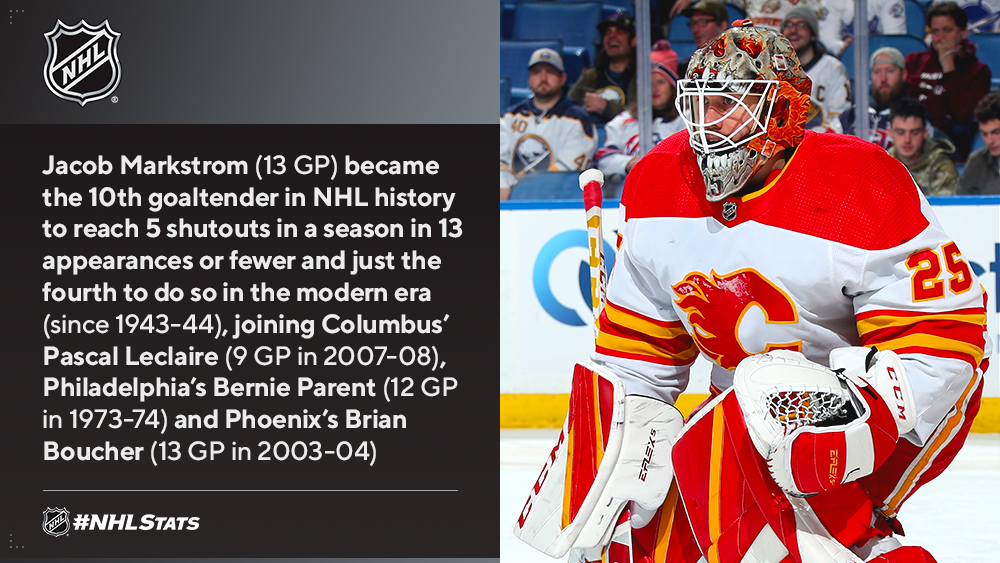 * Sidney Crosby scored the winning goal and Tristan Jarry made 24 saves as the Penguins blanked the Canadiens in their first head-to-head game since the 2020 Stanley Cup Qualifiers. 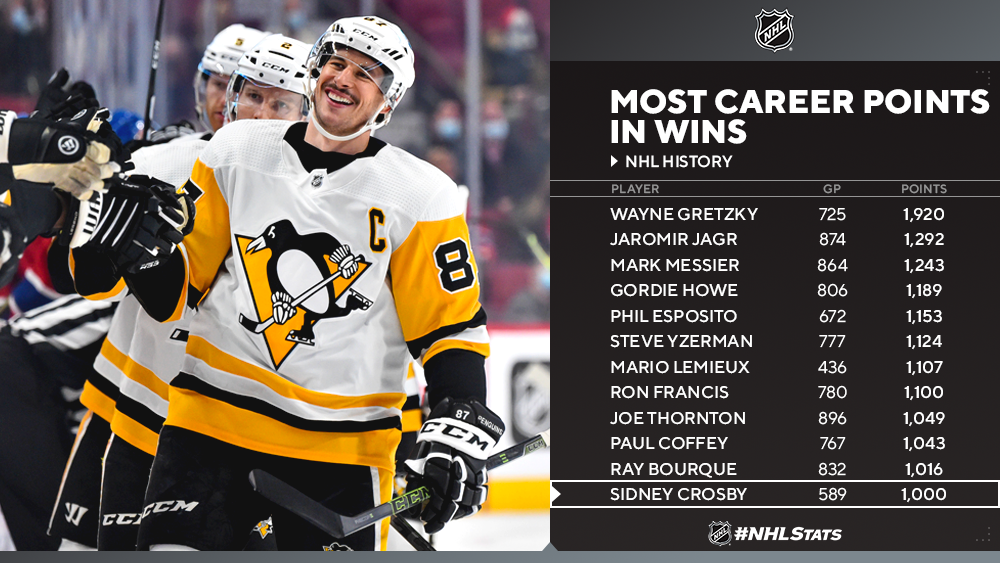 PANTHERS CONTINUE EARLY-SEASON SUCCESS ON HOME ICE
Jonathan Huberdeau and Anthony Duclair each posted 1-1—2, while Spencer Knight made a career-high 45 saves as the Panthers (12-2-3, 27 points) improved to 9-0-0 at FLA Live Arena this season and 13-0-0 on home ice dating to April 24. 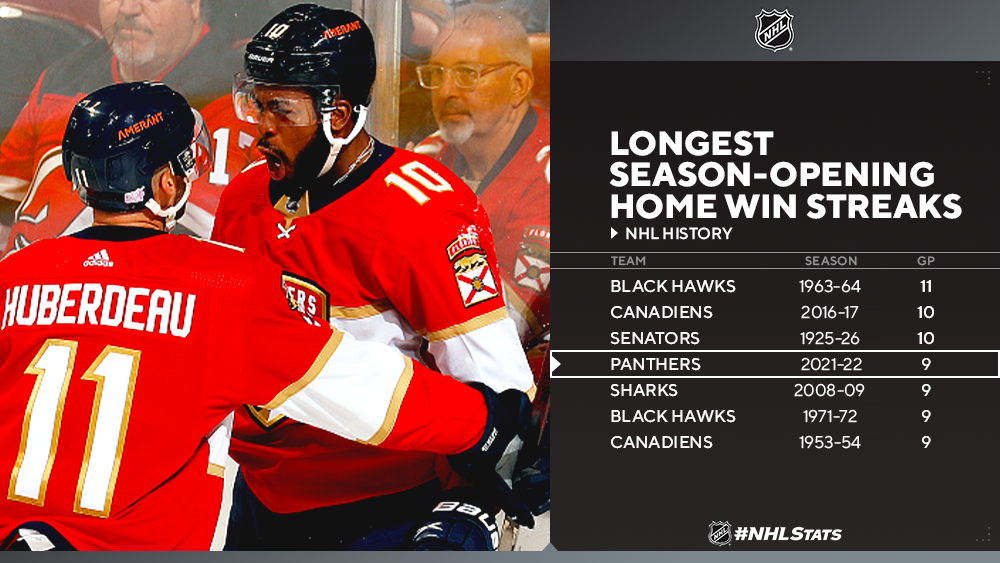 * Knight, one of two rookie goaltenders with 45-plus saves Thursday (also: Stuart Skinner, 46 w/ EDM), established a Panthers franchise record for most in a single contest by a rookie netminder – besting the previous mark set by Jacob Markstrom on March 21, 2013 (44 at NYR).

LIGHTNING SURVIVE FRANTIC FINISH ON FLYERS’ HOCKEY FIGHTS CANCER NIGHT
Zach Steward was the Flyers’ honorary coach on Hockey Fights Cancer Awareness night two years ago in the midst of treatment, but he started the celebration Thursday now cancer-free for the second time. After Steven Stamkos (1-1—2) gave the Lightning the lead with 1:56 remaining and Claude Giroux (2-0—2) tied the game with nine seconds left in regulation, Tampa Bay secured the victory in the shootout to extend its point streak to nine contests (7-0-2 since Oct. 26).

ICYMI: Nearly two years after diagnosis, Flyers forward Oskar Lindblom spoke to NHL.com ahead of Philadelphia’s Hockey Fights Cancer Awareness night Thursday to share his thoughts on aiding those going through their own battle. 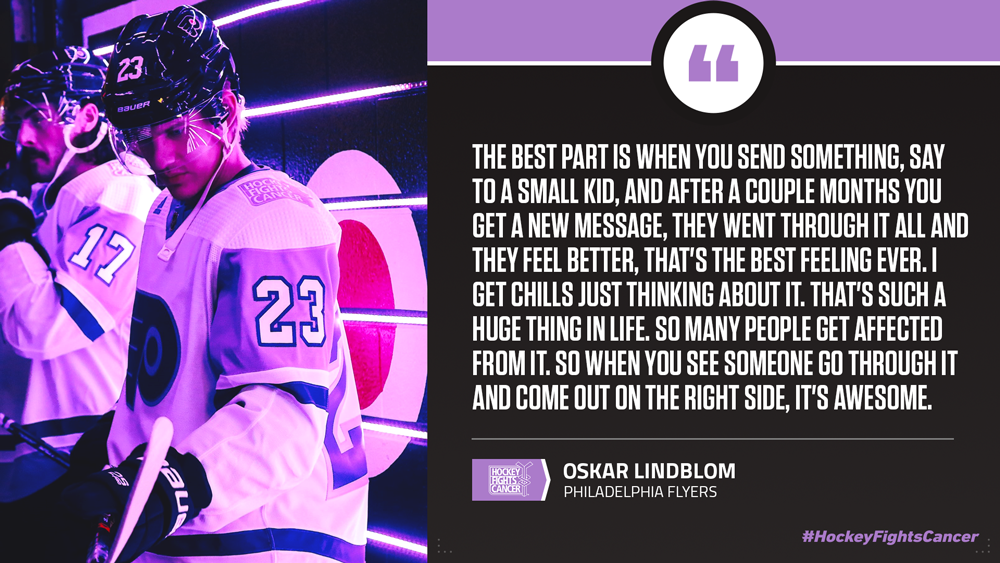 WILD’S SEVEN-GOAL WIN FEATURED IN NHLSTATS: LIVE UPDATES
In the Thursday edition of #NHLStats: Live Updates, Kirill Kaprizov (1-3—4) posted a career-high four points as the Wild scored at least seven goals for the 17th time in franchise history and fell one shy of the most in a single game. Only one team has scored more goals in a game in 2021-22 (CBJ: 8 on Oct. 14 vs. ARI). 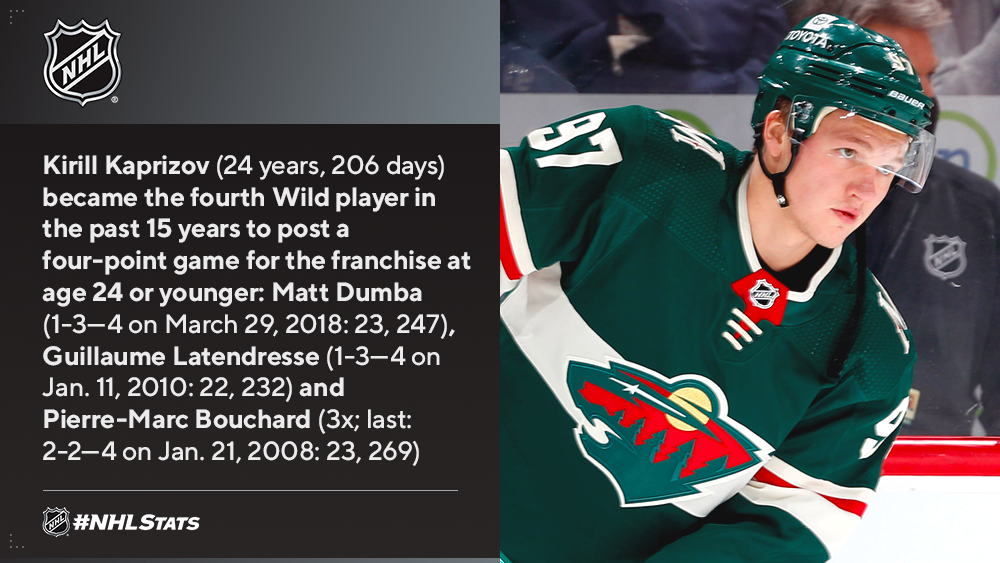 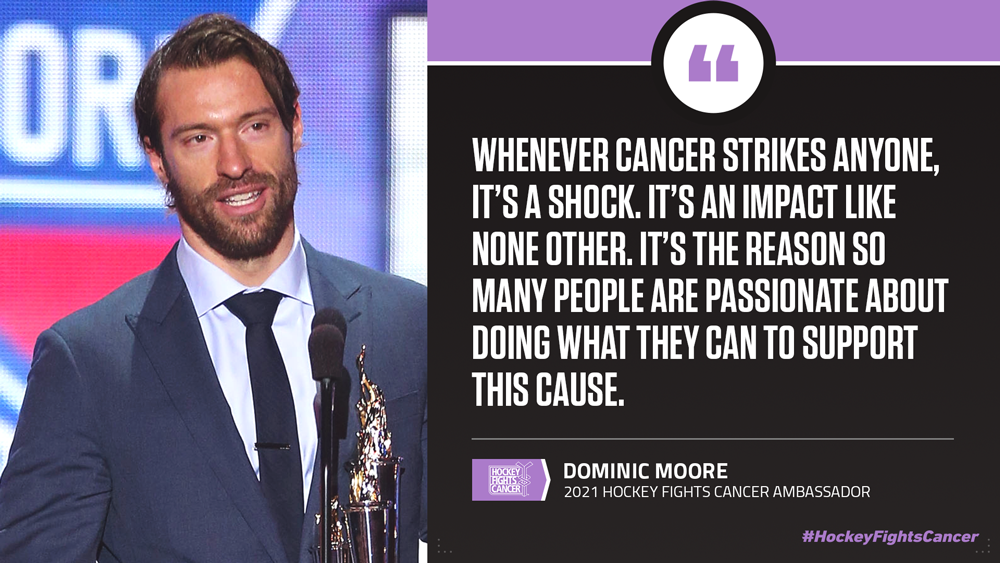 CANUCKS, KRAKEN PLAY HOSTS ON TWO-GAME FRIDAY
In Seattle, Jordan Eberle will aim to extend his point streak to seven games (6-3—9 in 6 GP), while Kraken netminder Philipp Grubauer is set to face his former team for the first time. In Vancouver, Quinn Hughes (13-98—111 in 145 GP) will look to record his 100th career assist when the Jets visit the Canucks. 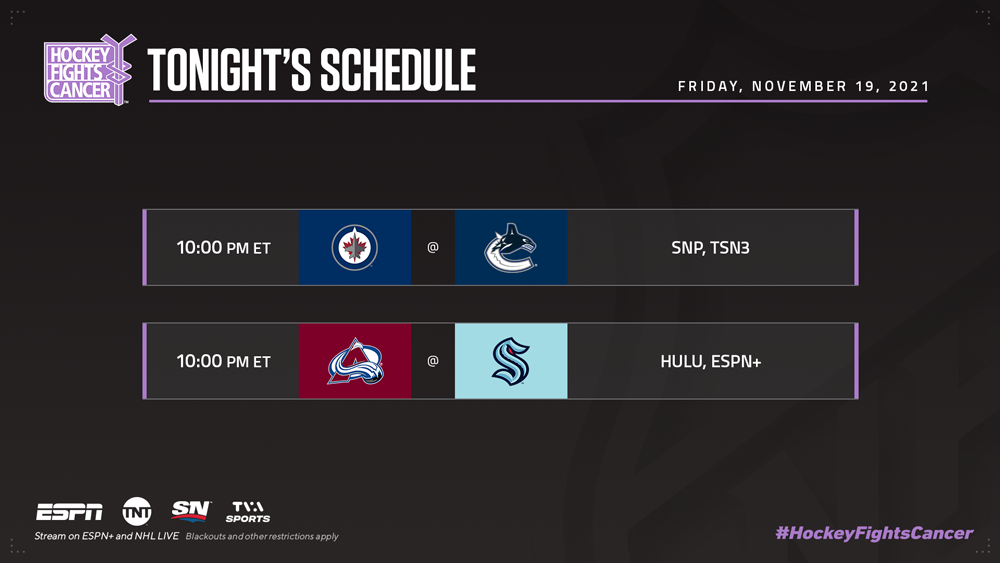