* The Rangers scored a trio of goals in a span of 1:03 to mark their fastest three in a regular-season game in nearly 28 years. * Morgan Rielly (59:48) recorded the second-latest go-ahead goal in regulation by a Toronto defenseman, a mark which trails only Matt Hunwick (59:52).

RANGERS SCORE THREE TIMES IN 63 SECONDS TO POWER PAST BLUE JACKETS
Chris Kreider (2-0—2) scored his 10th and 11th goals of the season, including the first of three Rangers tallies in a second-period surge, to lead New York to its third straight road win against Columbus at Nationwide Arena. 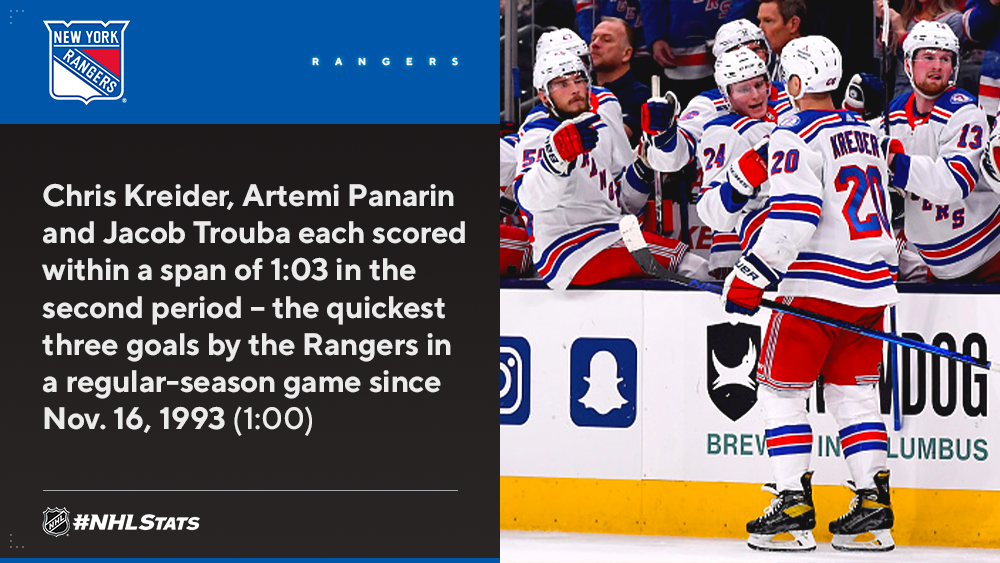 RIELLY SCORES LATE TO LIFT MAPLE LEAFS TO VICTORY
Morgan Rielly scored with 11.8 seconds remaining in regulation to secure the Maple Leafs’ victory after the Sabres erased a multi-goal deficit in the third period, while Joseph Woll – who was selected 62nd overall by Toronto in the 2016 NHL Draft which was held in Buffalo – earned a win in his NHL debut. Rielly’s winner trails only Matt Hunwick for the latest by a defenseman in franchise history. 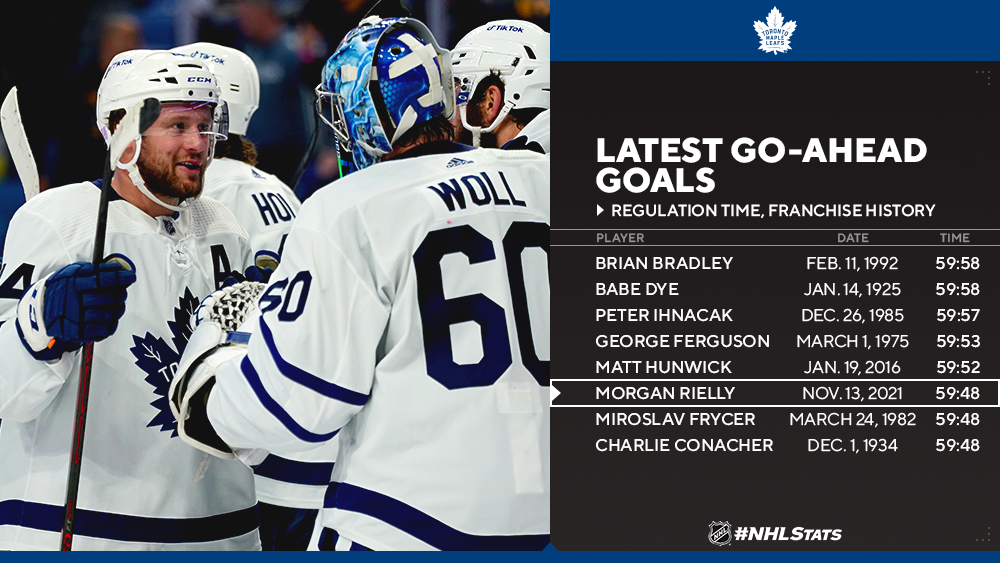 * Scheifele scored 32 seconds into extra time to snap the Kings’ win streak at seven games. With his 10th career overtime goal, Scheifele surpassed Ilya Kovalchuk (9) for the most in Jets/Thrashers history.

* Girard recorded four points in a game for the second time in his NHL career (also 0-4—4 on Jan. 2, 2020). He became the third defenseman in Avalanche/Nordiques franchise history to record four or more points in a contest multiple times, joining Sandis Ozolinsh (4x) and Tyson Barrie (3x).

* Josi’s four-point outing came a game after Mikael Granlund (0-4—4 on Nov. 11) also did so. It marked the first time in franchise history that at least one Predators player had four points in consecutive team games. 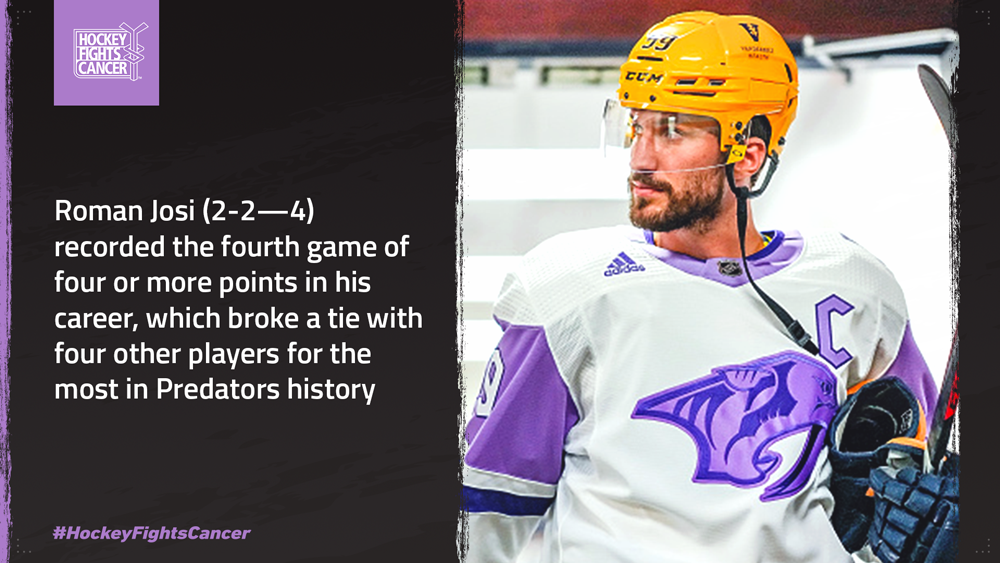 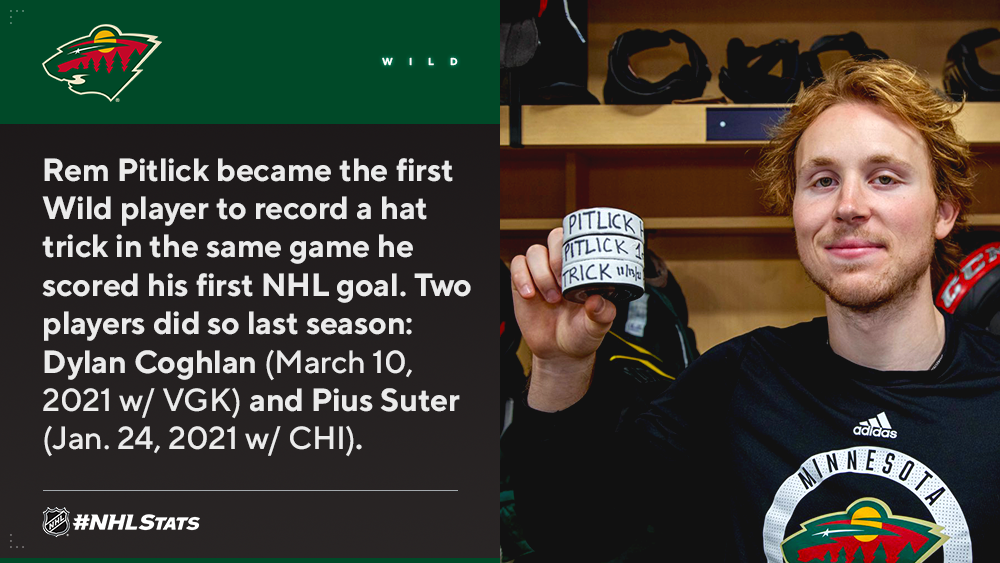 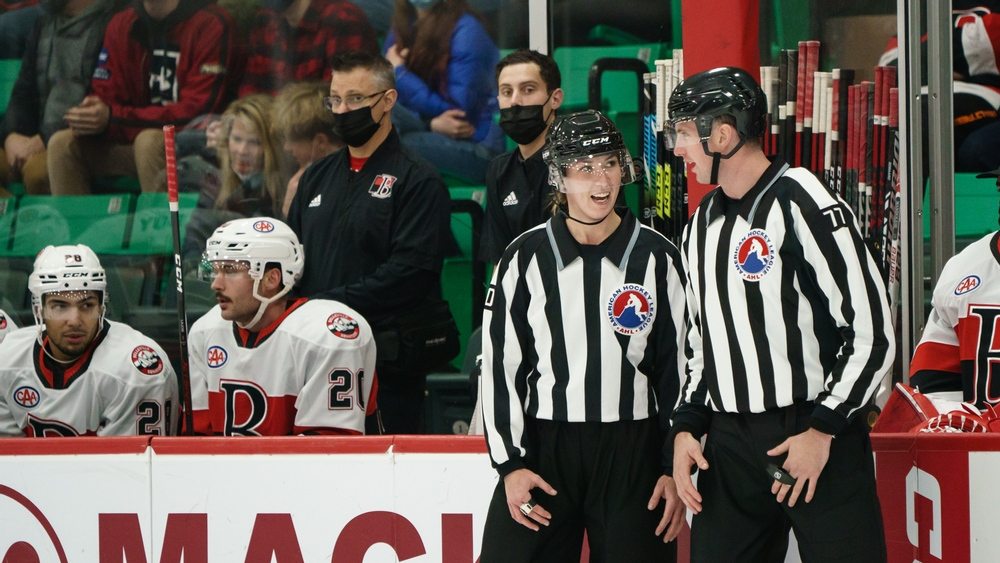 STREAKS ON THE LINE DURING SUNDAY’S SIX-GAME SLATE
Sunday’s slate will see Oilers captain Connor McDavid (9-16—25 in 13 GP) and Ducks forward Troy Terry (11-8—19 in 14 GP) attempt to extend their point streaks to 14 contests, while the Capitals (8-2-4, 20 points) host the Penguins (5-4-4, 14 points) for their Hockey Fights Cancer Awareness Game at Capital One Arena. 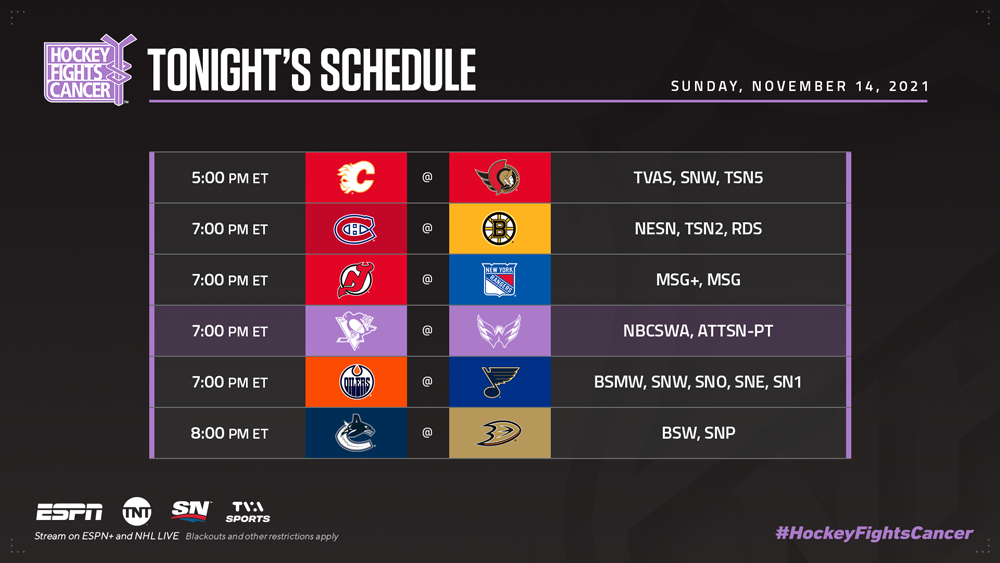