* The Kings and Ducks extended their win streaks to six and five games, respectively, in dramatic fashion after each surrendered a third-period lead before scoring in overtime. * The Devils and Panthers became the 10th set of teams to combine for at least 10 goals in 2021-22 and the second so far in November.

* The Wild (8-3-0, 16 points), who lead the NHL with seven comeback victories and own wins in each of their last three games, are set to face off against the Coyotes (1-10-1, 3 points) on TNT during 2021 Veterans Appreciation Night presented by Navy Federal Credit Union.

PAIR OF GOLDEN STATE TEAMS EXTEND WIN STREAKS IN OVERTIME
The Kings and Ducks extended their win streaks to six and five games, respectively, despite each of the Golden State teams’ opponents rallying with a third-period comeback to force overtime:

* Alex Iafallo scored six seconds into the third period and Jake Evans pulled the Canadiens even, before Adrian Kempe netted the winner in overtime to help the Kings earn their sixth consecutive victory – the longest active win streak in the NHL. Iafallo extended his point streak to seven games (5-5—10), marking the longest by a Kings player this season. 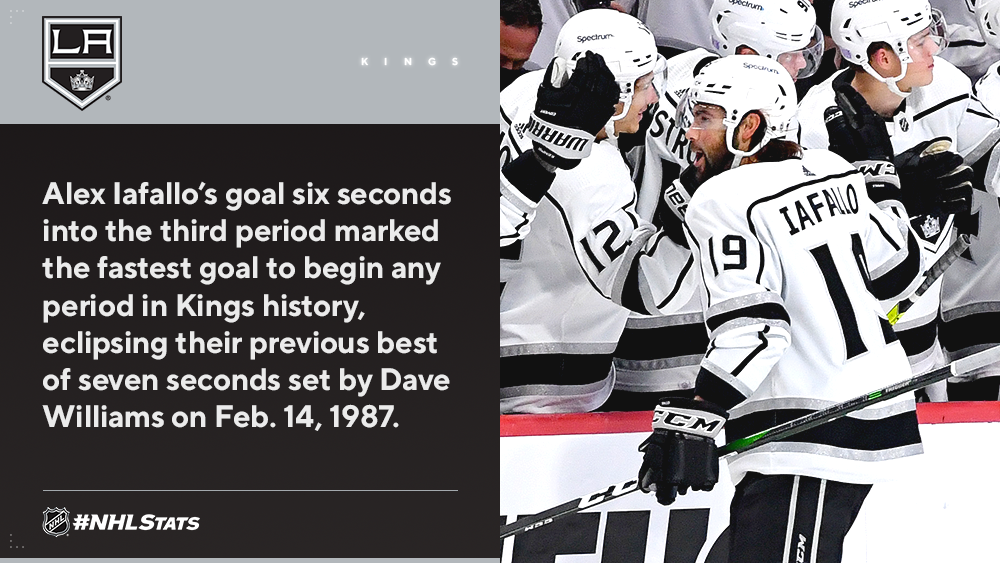 * Troy Terry (1-1—2) factored on two of Anaheim’s three goals – including scoring the winner in overtime – and extended his point streak to 12 games as the Ducks earned their fifth consecutive win. The last time Anaheim recorded a longer run was in 2015-16, when they set the franchise record with 11 straight victories (from Feb. 13 to March 5, 2016). 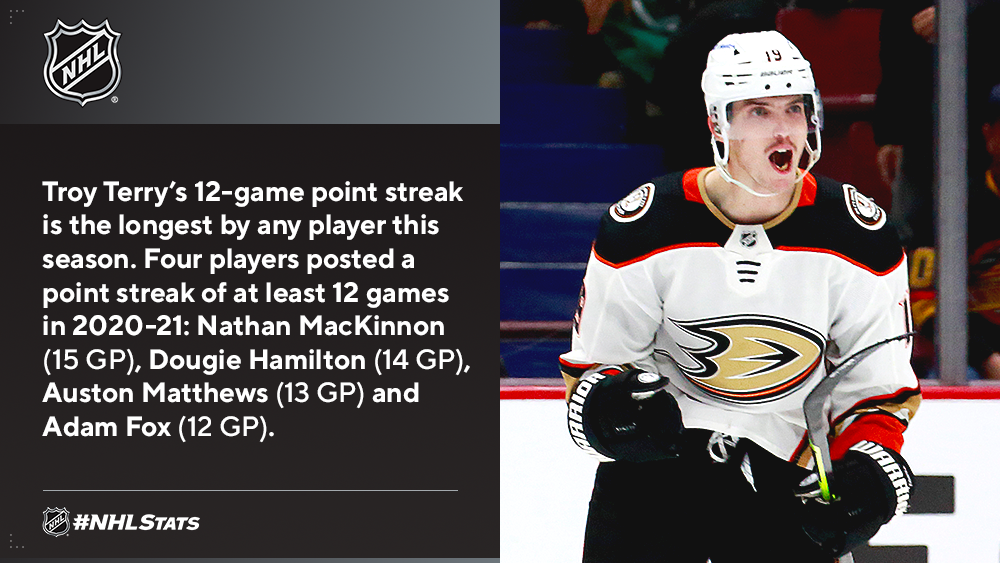 DEVILS SCORE SEVEN TO TAME PANTHERS ON HULU, ESPN+
Ty Smith (1-2—3) recorded a career-high three points as the Devils became the sixth different team to score at least seven goals in a game this season. New Jersey and Florida became the 10th set of teams to combine for at least 10 goals in 2021-22 and second in the month of November (NYR at EDM on Nov. 5). 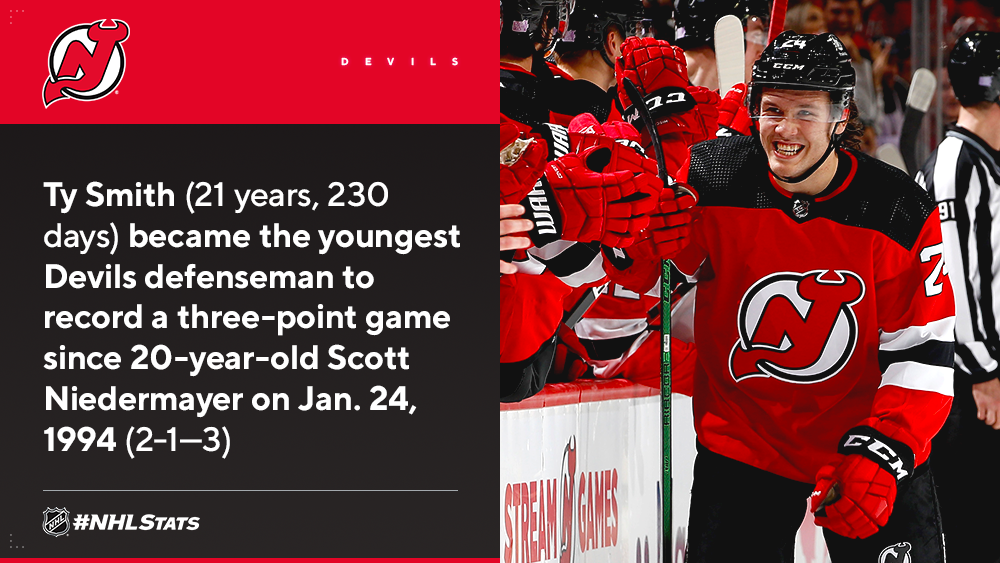 * The two clubs combined for a game-high four goals in the second period, including three in a span of 1:58 from Florida’s Aleksander Barkov, Owen Tippett and New Jersey’s Andreas Johnsson. It marked the third time two teams have combined for three goals in the opening two minutes of a period this season (also 1:41 – OTT at CHI on Nov. 1 and 1:33 – SEA at ARI on Nov. 6).

DID YOU KNOW?
Aleksander Barkov’s goal marked the 189th of his career, which moved him past Panthers icon Olli Jokinen (188) for the most in franchise history. 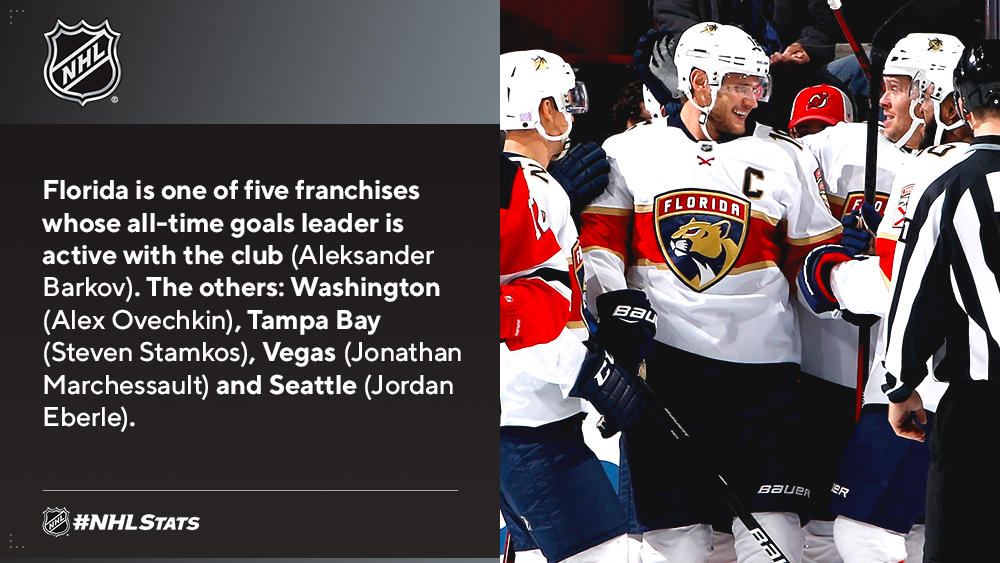 * Sam Gagner (0-1—1) found the score sheet in his 900th career game as the Red Wings halted the Oilers’ regular-season road winning streak at 10 games (dating to 2020-21) and picked up their third consecutive victory. Detroit sits second in the Atlantic Division, behind Florida (10-2-1, 21 points). 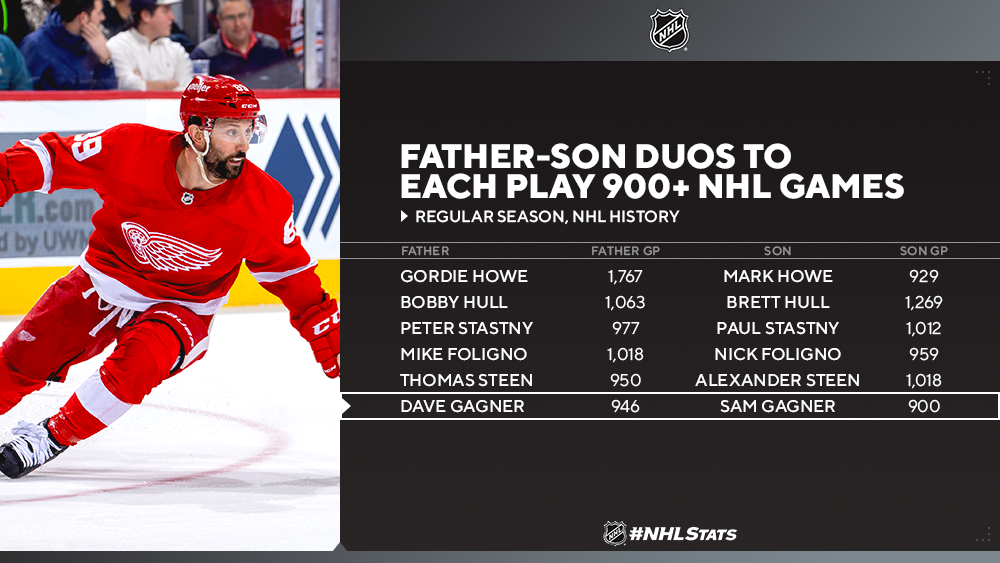 * While Adin Hill made 37 saves, Jonathan Dahlen (6-2—8) scored his sixth career goal and tied Detroit’s Lucas Raymond (6-8—14) for the most by a rookie in 2021-22 to help the Sharks snap the Flames’ 10-game point streak. In 2020-21, Dahlen captained Timra IK of Sweden’s HockeyAllsvenskan and accumulated Forward of the Year, Most Valuable Player and Playoffs MVP honors.

* Hill, who made his second appearance on the road against the Flames (also Jan. 13, 2019), played bantam hockey as a member of the Calgary Bisons U15 AAA alongside Sharks teammate Nicholas Merkley and Tampa Bay’s Brayden Point.

Connor McDavid extended his point streak to 11 games and the Hurricanes (10-1-0, 20 points) established a franchise record for the fewest games to 10 wins in a season on Tuesday’s rendition of the #NHLStats: Live Updates. 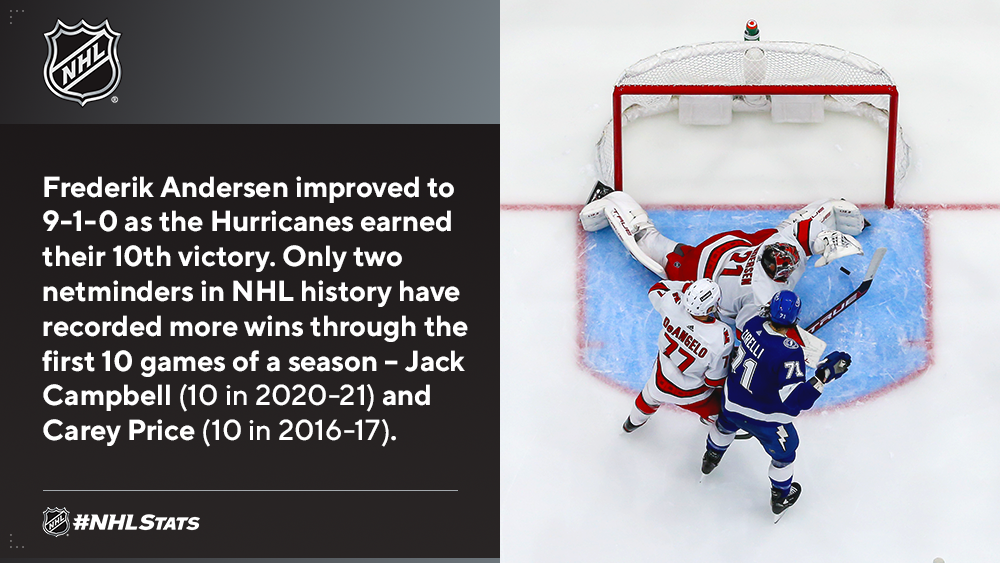 With wins in each of their last three games, the Wild (8-3-0, 16 points) travel to Gila River Arena to square off with the Coyotes (1-10-1, 3 points) on TNT during 2021 Veterans Appreciation Night presented by Navy Federal Credit Union. Kirill Kaprizov (29-31—60 in 66 GP) enters the contest one goal shy of 30 in his career and can require the fewest games to hit the mark among players to debut with the franchise; Marian Gaborik (93 GP) currently holds the distinction. 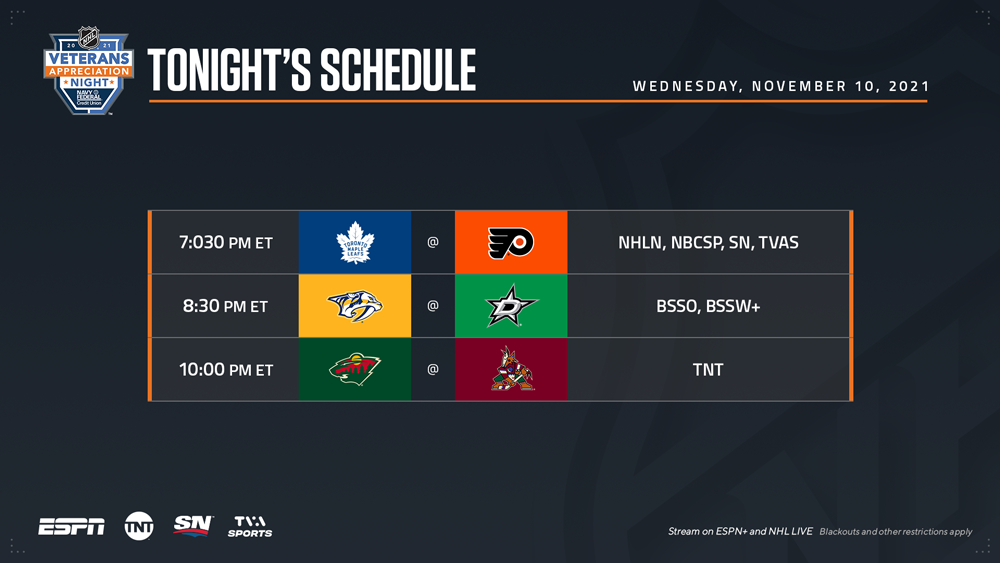