* Chris Kreider (44-17—61 in 65 GP) moved into a tie with Leon Draisaitl for second in the 2021-22 Maurice “Rocket” Richard Trophy race, while Kyle Connor pulled even with Alex Ovechkin for fourth with his41st of the season.

* The Flames became the first team since the Mario Lemieux-led Penguins in 1995-96 to feature four players score 30 goals by the 65th game of a campaign.

* Marc-Andre Fleury is set to make his debut in a Wild uniform on a busy Saturday which will feature 24 teams in action.

MAKAR SCORES TWICE, SETS FRANCHISE RECORD
Cale Makar (2-0—2) scored his 23rd and 24th goals of 2021-22 to establish a franchise record for most goals by a defenseman in a single season, surpassing Sandis Ozolinsh (23 in 1996-97) in the process, as the Avalanche improved their League-leading record to 46-14-5 (97 points).

* With his fourth multi-goal outing of 2021-22, Makar tied Victor Hedman for the most among all defensemen and tied Sandis Ozolinsh (4 in 1999-00) for the most by a defenseman in a single season in Avalanche/Nordiques history. 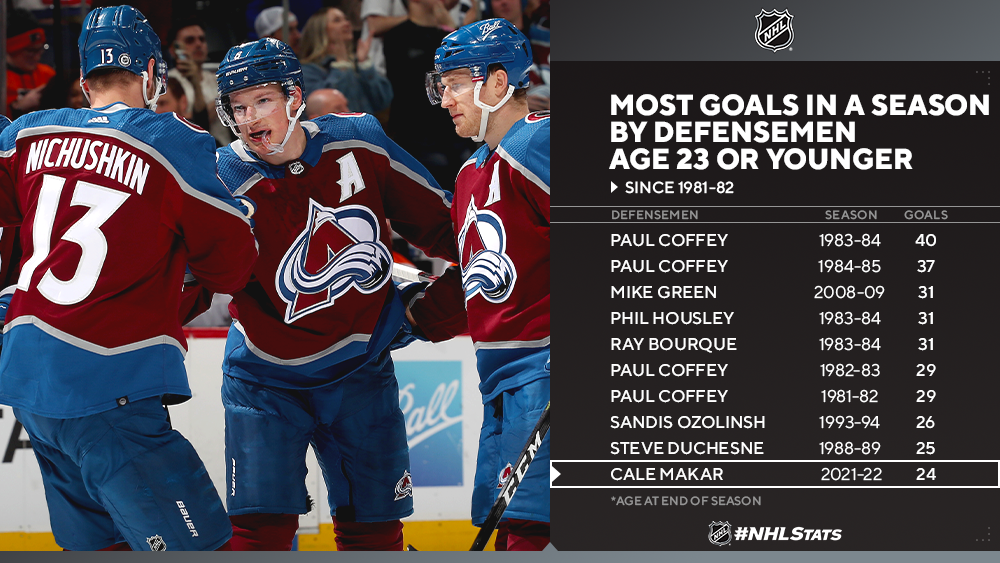 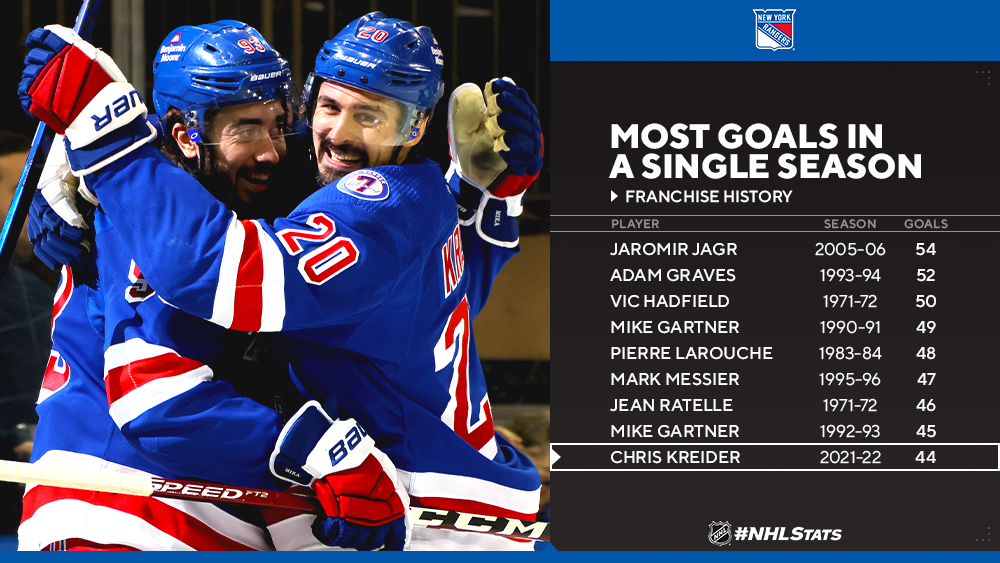 *Connor factored on two of his team’s four goals, including scoring his 41st of the season, as the Jets overcame a late Blue Jackets rally to earn an overtime win. Winnipeg (31-25-10, 72 points) moved within three points of idle Dallas (36-24-3, 75 points) for the final Wild Card position in the Western Conference.

* Connor tied Ilya Kovalchuk (41 in 2003-04) and Dany Heatley (41 in 2002-03) for the seventh-most goals by a Jets/Thrashers player in a single season. On pace for 50 goals this year, Connor can become just the second player in franchise history to claim the Maurice “Rocket” Richard Trophy – Kovalchuk shared the award with Jarome Iginla and Rick Nash in 2004 (all w/ 41).

… WHILE GAUDREAU, TKACHUK EACH NOTCH 30TH GOAL OF THE SEASON
Johnny Gaudreau (1-2—3) and Matthew Tkachuk (1-1—2) each scored their 30th goal of the season, respectively, as the Flames (39-17-8, 86 points) earned a win against the Coyotes at Scotiabank Saddledome to pad their lead atop the Pacific Division standings. Gaudreau boosted his 2021-22 totals to 30-55—85 (64 GP) and moved into fourth place in the Art Ross Trophy race. 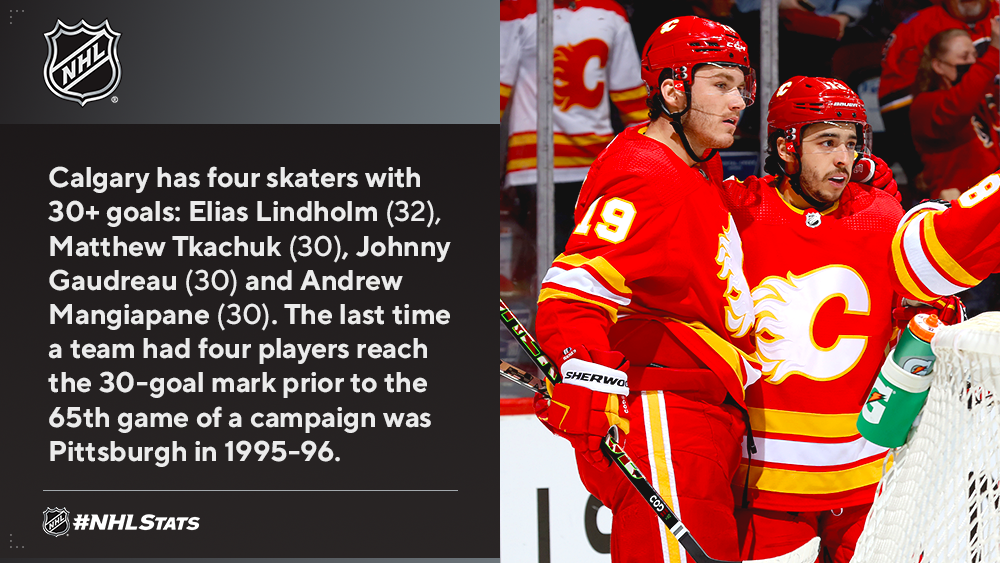 #STANLEYCUP PLAYOFFS RACE: METROPOLITAN DIVISION
Every Saturday for the balance of the regular season, the #NHLStats team will place a weekly spotlight on one of the League’s postseason races. The Hurricanes (42-15-7, 91 points) enter the final weekend of March atop the Metropolitan Division, a position they’ve held for 107 days in 2021-22. Only the Panthers (125 days) have been positioned in first place in their division for a longer stretch this season.

* The Metropolitan Division has been one of the most tightly contested groupings this season. The top three teams have been separated by five or fewer points for 144 days of 2021-22 – 19 more than the next closest division (Pacific: 123; Central: 90 & Atlantic: 83).

* The Hurricanes are looking to qualify for the postseason for the fourth straight year under head coach Rod Brind’Amour, who wore the “C” for Carolina from 2005-06 to 2008-09 which also included a Stanley Cup in 2006. He can become the fourth individual in NHL history to captain a franchise to a Cup and then win a championship with that club as head coach. Toe Blake (2 as captain, 8 as coach w/ MTL), Hap Day (1 as captain, 5 as coach w/ TOR) and Cooney Weiland (1 as captain, 1 as coach w/ BOS) all did so.

* The Penguins, who own the NHL’s longest active streak of consecutive playoff appearances (15), are within striking distance of their 10th division crown and second in as many seasons after finding themselves 11 points back of top spot entering games on Nov. 18, 2021. The 2021-22 campaign could be the second Pittsburgh has overcome a deficit of 11 or more points to win its division after first doing so during the 1990-91 season, when the franchise sat 15 points from first place in the Patrick Division on December 2, 1990 before claiming the division title and its first Stanley Cup. 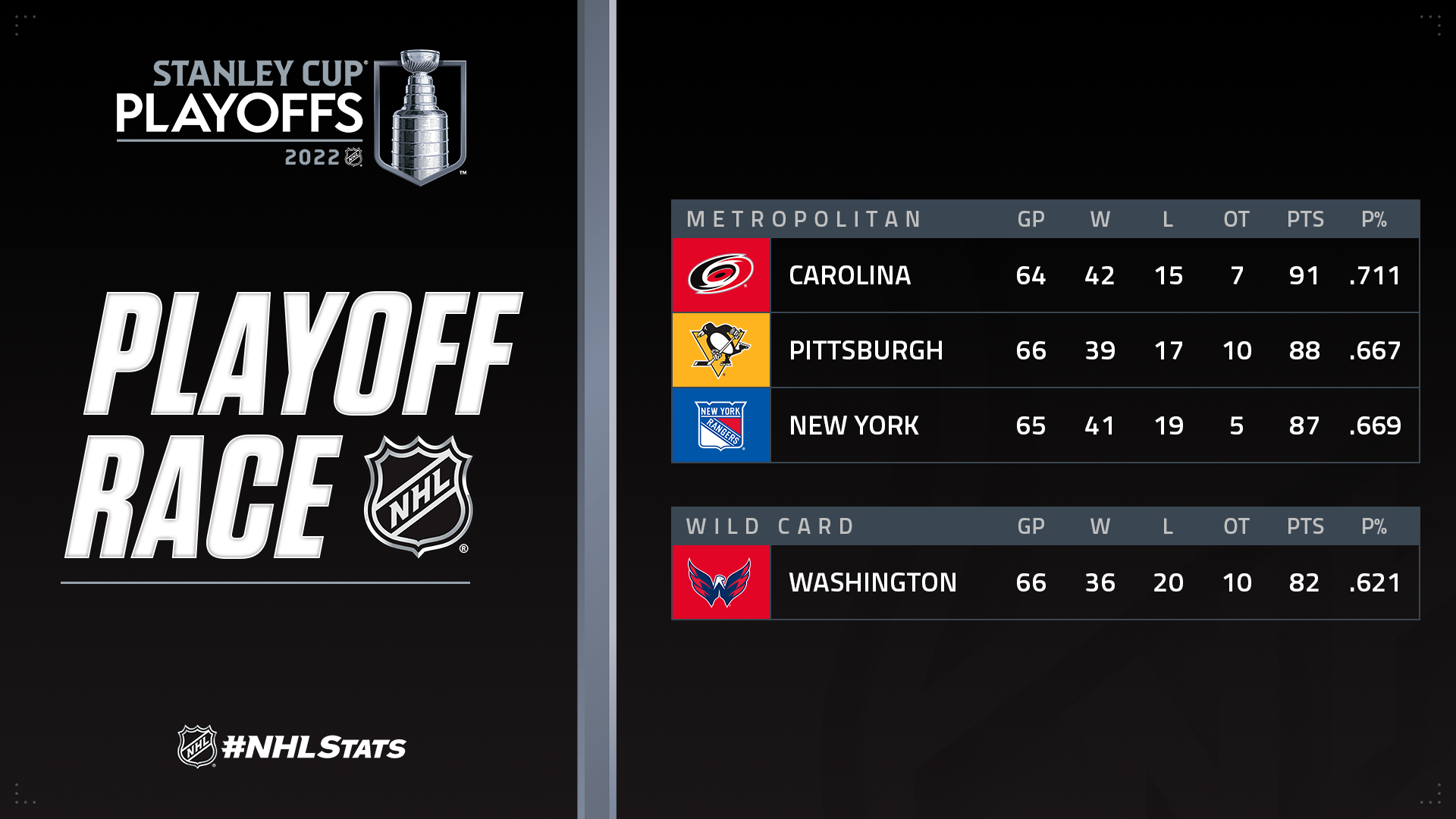 Marc-Andre Fleury is set to make his debut in a Wild uniform, after being acquired by Minnesota at the 2022 NHL Trade Deadline on Monday, when his new club welcomes the Blue Jackets on a 12-game Saturday. Fleury is one win shy of his 14th career 20-win season, which would be the fourth most in NHL history behind Patrick Roy (17), Martin Brodeur (16) and Ed Belfour (15). 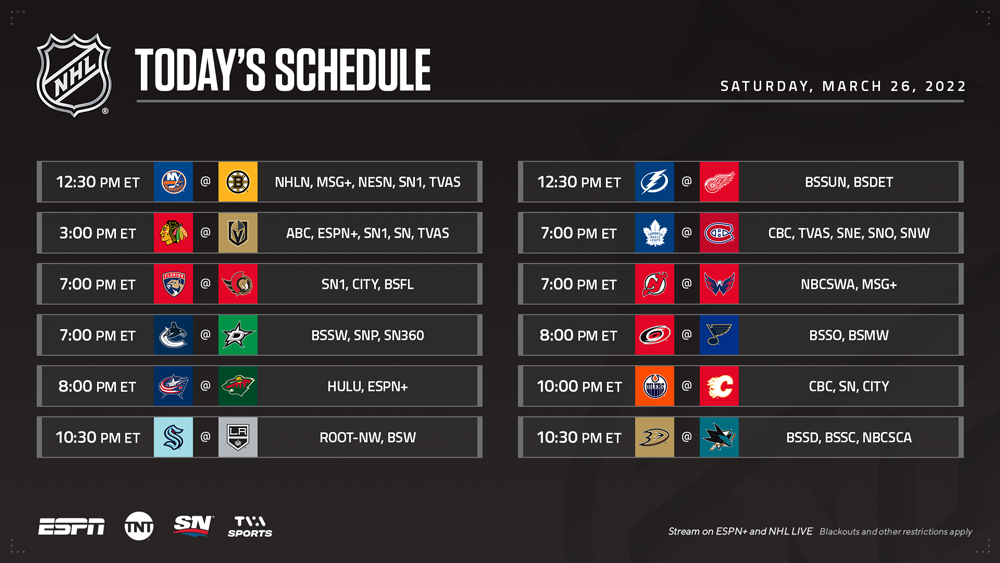