* Down 4-1 to the Sabres, the Panthers rallied yet again and became the ninth team in NHL history to overcome a three-goal deficit to win in consecutive games.

* The Stars extended the NHL’s longest active win streak to six games and did so after becoming the first team in League history to score within the opening 75 seconds in four straight contests.

* The Wild joined the Panthers in collecting their 16th win of the season, which trails only the Maple Leafs (17) for the most among all teams in 2021-22.

DEJA VU AS PANTHERS OVERCOME THREE-GOAL DEFICIT YET AGAIN
After Jonathan Huberdeau and Sam Reinhart played instrumental roles in Florida’s three-goal, third-period comeback win against the Capitals on Nov. 30, the duo struck again Thursday (Huberdeau: 1-4—5 & Reinhart: 1-3—4) to help the Panthers (16-4-3, 35 points) earn their ninth three-goal comeback win since 2011-12 – trailing only the Penguins (11) and Capitals (11) for the most among all teams over the past 10 years. 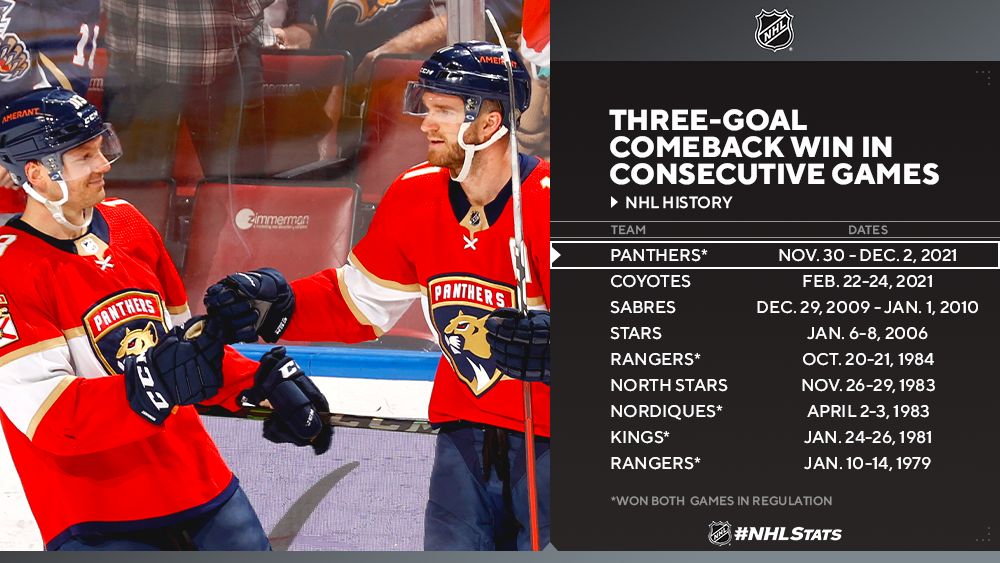 * Huberdeau and Reinhart are the fourth set of Panthers teammates in the past 10 years to record four or more points in the same contest. The others: Huberdeau and Noel Acciari (Dec. 20, 2019), Huberdeau and Aleksander Barkov (March 8, 2019) as well as Brian Campbell, Stephen Weiss and Kris Versteeg (Oct. 17, 2011).

* Huberdeau – whose streak of assisting on consecutive team goals ended at five (dating to Nov. 30) – accounts for three of eight performances of five-plus points in Panthers history, with Olli Jokinen (2-4—6 on March 17, 2007) holding the franchise mark.

* The Stars became the first team in NHL history to score within the first 75 seconds of a game in four consecutive contests, with Pavelski factoring on each game-opening goal (1-3—4). 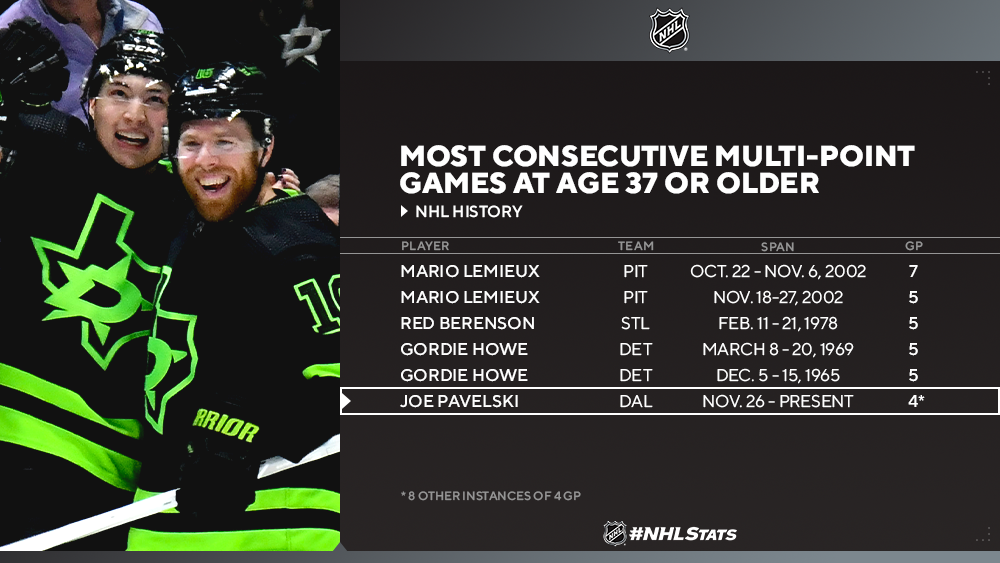 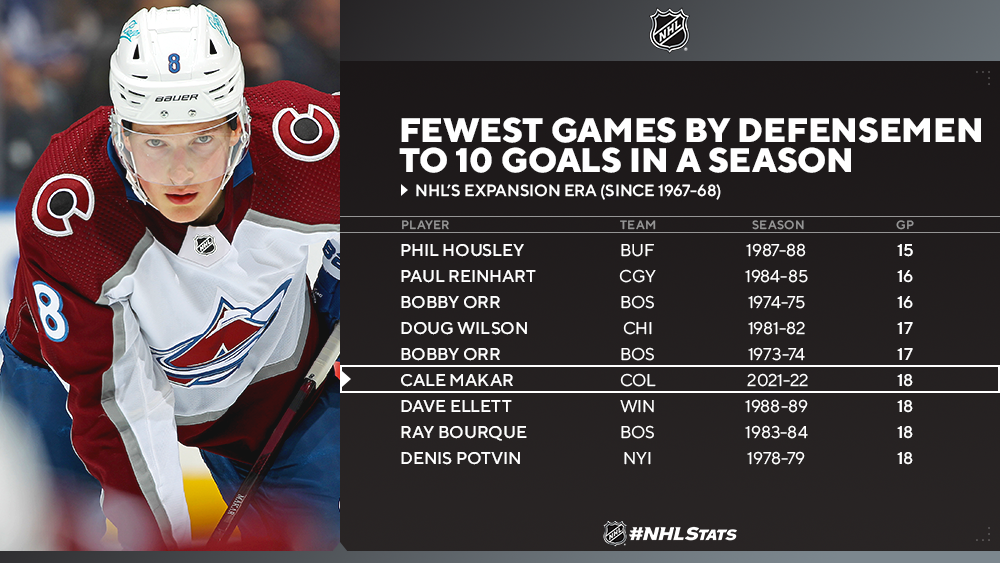 * Thursday marked Kaprizov’s seventh career outing with three-plus points – the most by any Wild skater prior to his 80th career game and five more than the next closest skaters (Nino Niederreiter, Marian Gaborik & Rickard Wallin all w/ 2). 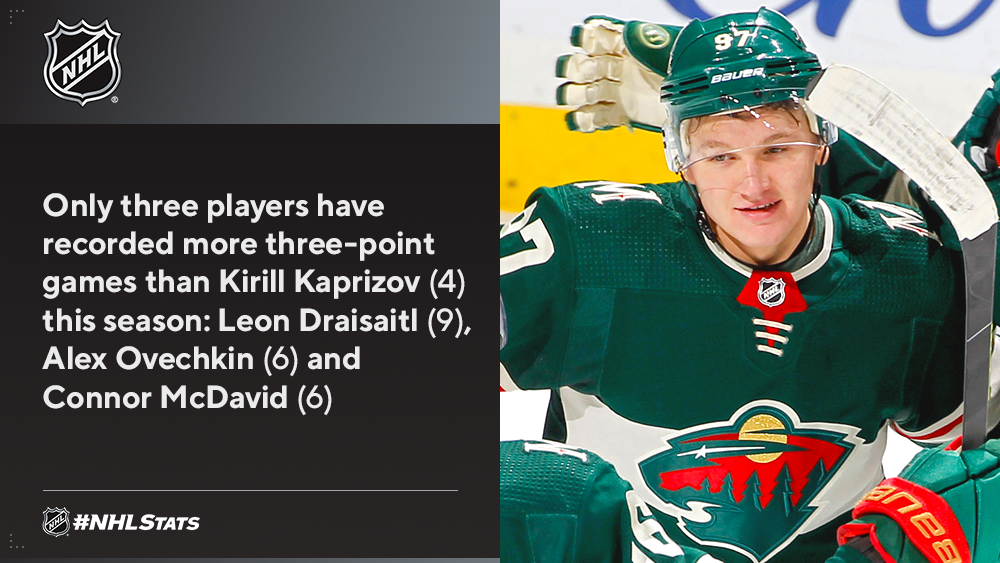 FORSBERG’S 47-SAVE WIN HIGHLIGHTS #NHLSTATS: LIVE UPDATES
The latest edition of #NHLStats: Live Updates featured Senators goaltender Anton Forsberg, who made a career-high 47 saves and tied the most by any goaltender this season (also Jake Allen on Nov. 27 at PIT).

RANGERS EYE SEVENTH STRAIGHT WIN AT MSG
Chris Kreider (16-3—19 in 21 GP) and the Rangers welcome the Sharks (13-9-1, 27 points) to Madison Square Garden on Friday, with New York having won each of its last six home games and outscoring the opposition 23-13 over that span. 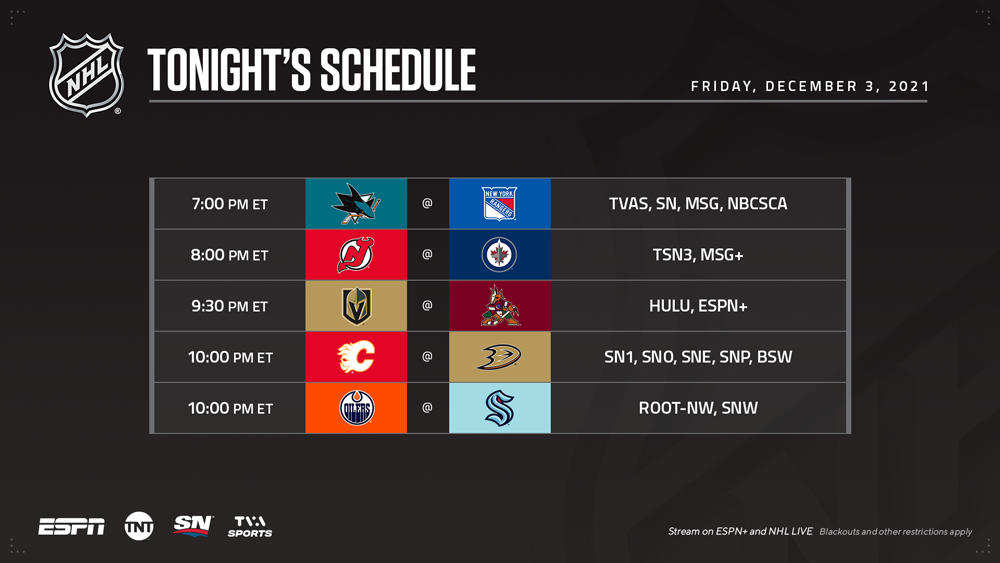 * Kreider sits tied for third in the NHL in goals this season behind only Leon Draisaitl (20 in 21 GP) and Alex Ovechkin (19 in 24 GP). With at least 20 goals in each of his previous three seasons, including a career-high 28 (tied) in 2018-19, Kreider has netted 88 total tallies in 213 contests since then and 47 at Madison Square Garden – the most home goals among Rangers skaters over that span. 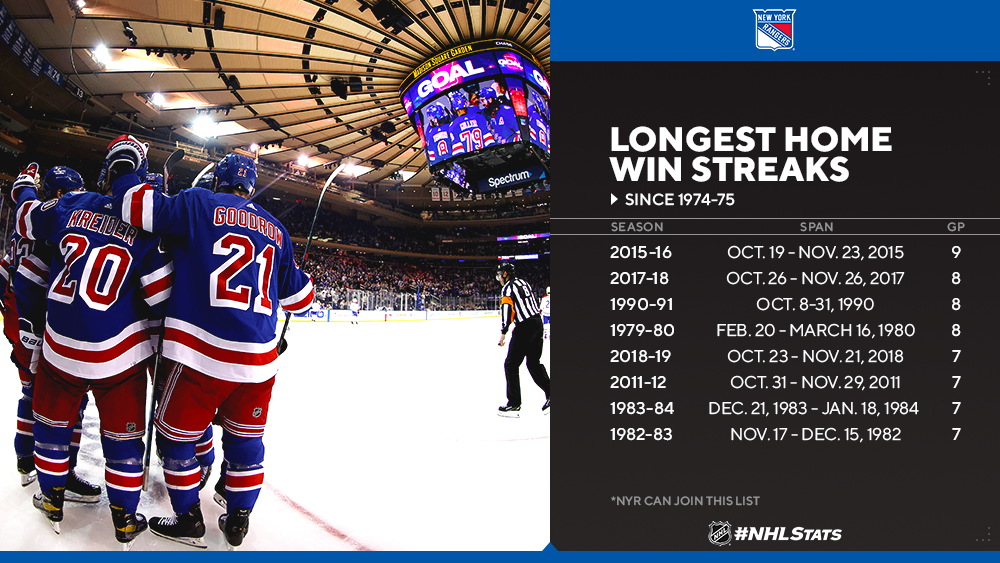