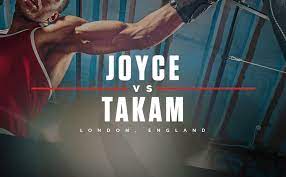 An important fight is brewing in the boxing world, with the bout between Joe Joyce and Carlos Takam taking place this Saturday, July 24, at 2:15 pm EST. Takam has had his fair share of fights posting an impressive 39-5-1 record, with Joyce having won 12 straight fights and not having suffered a single loss to his name.

Put this together, and you have a formula for an amazing boxing fight that will be taking place very soon. And to spice things, both the WBO international heavyweight and WBC silver titles will be on the like with Joyce trying to win both.

Joe Joyce is posted at the whopping (-1250) odds at BetOnline right now, and you know what this means. If the oddsmakers get it wrong, you are looking at a decent payday. Joyce seems to be the absolute favorite, and Takam may as well be walking to his final bout in boxing, at least the way bookies have it.

Yet, having seen both fighters in action over the years, it’s hard to dismiss Takam. Joyce was almost going to fight Oleksandr Usyk, but the to-and-fro between Fury vs. Wilder got in the way. So, can Takam really make it? Can he win the title fight and defend his belts?

When What Time, and Where to Watch Takam vs. Joyce?

Both Takam and Joyce have many significant wins to their names. Takam has won against the likes of Fabio Maldonado, Michael Grant, and Frans Botha, three opponents that you would not dismiss on a whim, and he has done so convincingly.

Yet, having turned 40, Takam has age to worry about against a slightly sprier Joyce, who is still fresh, energetic, and seems to have a lot of stamina. As is usually the case in heavyweight divisions, endurance is a problem, and Takam does seem to be having a slight difficulty keeping his wind in the ring.

However, his last loss was to Dereck Chisora, another amazing fighter, at the O2 Arena in Greenwich in 2018. He recovered quickly, and after five months, he was fighting Senad Gashi, who has a 17-1-0 track record, Gashi’s only loss being to Takam.

Following that, he faced Craig Lewis and not least Maldonado. His most recent fight was against Jerry Forrest, who tracks 26-3-0 in the overall standing, with one of these losses being inflicted by Takam.

So are the +700 odds fair? We believe that as the underdog, Takam has an amazing chance of making it on Saturday and defending his titles. Yes, it’s going to be a challenge. There is no doubt about that, and riding on a 12-fight winning streak, Joyce is definitely a tough nut. However, Takam went on an 18-winning streak before he was stopped by Gregory Tony back in 2009.

Joe Joyce Tipped as a Sho-in for Saturday

Then you have Joyce. He went from zero to 12 in three years, an achievement that definitely beckons. He is still undefeated, and that definitely sends a clear message – he’s looking to leave a legacy in boxing.

Joyce has defeated many strong opponents and not least Alexander Ustinov, who is perhaps the biggest reason why the fighter is tipped to win against Takam this Saturday. His most recent fight with Daniel Dubois ended up with a win as well.

Overall, his presence in the ring is full and often makes it a little challenging for other fighters to react. Then there is the tale of the tape.

Tale of the Tape: Joyce vs. Takam

In terms of physical characteristics, Joyce has a small advantage in terms of height. That alone won’t secure him a victory. Comparing KOs, Takam has finished around 70% of his fights with one whereas Joyce has 91%, but then again he does have fewer fighters.

Clearly, the tale of the tap won’t help you pick a winner, as both fighters are fairly evenly matched on all counts. What’s left is for us to strap in and behold one of the best fights of the year.